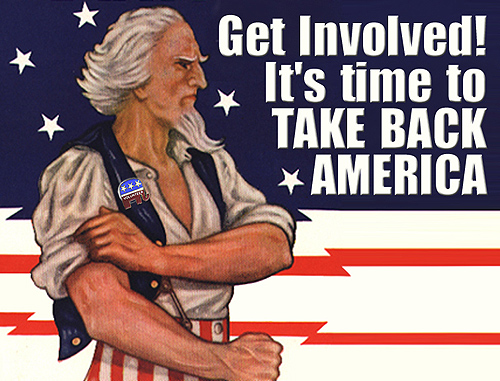 It has come to my attention that our last memo regarding abortion reached the hands of the no-good liberals, who in turn gave it to the liberal media.Â  It seems an Internet ad claiming I would receive a free TV by virtue of me being the one-millionth visitor was not legitimate.Â  The hacker behind it intercepted the memo, as well as my credit card information (which I had to enter in order to prove I was real).Â  Just in case something similar happens again, Because who could possibly know which Internet ads claiming to give away free stuff are legitimate, I have prepared a defense against liberal onlookers:

Now that it is just us Conservatives, I have been instructed to make clear the Republican agenda regarding economic policy by the man who finances so many Republicans, who will be referred here to as Ronald Stump.Â  The Ronald, as he likes to be called, has several points he wishes for us to make clear whenever we talk about Republican Economic Policy.

First and foremost, ALL TAXES ARE ALWAYS BAD!Â  Any time you discuss taxes, you must mention how they will stifle job growth in the private sector.Â  If asked how this actually works, merely deflect the question by talking about how raising taxes is all part of Obamaâ€™s grand Socialist scheme.Â  The Ronald has also made it clear that our priority is specifically to keep the capital gains tax as low as possible.Â  If some liberal reporter inquires if that stance is merely to appease our wealthy backers, segway to our next point:

We do not refer to rich people as rich, or wealthy, or even upper class; they are â€œjob creators.â€Â  By allowing â€œjob creatorsâ€ to keep all of their money, they are more likely to keep investing in businesses.Â  The more money these people have, the more jobs they will create, and the more their money will â€œtrickle downâ€ to the rest of us.Â  If asked for proof, merely point out that wealthy people created OUR jobs.

You may be asked how our country is supposed to get out of debt when taxes are lowered.Â  The obvious solution is to cut spending and make the government as small as possible.Â  There are plenty of non-essential programs, which should always be referred to as â€œentitlement programs,â€ that only serve the liberal agenda of socializing the country.Â  These programs include any government involvement in healthcare, education, environmental protection, welfare, or any other subsidized program.Â  If people want clean water or for their children to have an education, they should have to pay for it out of their own pocket.Â  It is only after we cut these socialist programs and lay off millions of workers that we will be able to fight unemployment.

Ronald Stump also encourages us to promote a fair and equal America, where everybody pays the same low tax rate.Â  Any mention of over-taxing the top 1% should be countered as being class warfare.Â  America was built on the wallets of the wealthy, err, job creators, and even allowing the impoverished to see a much greater quality of life is no reason would why we should so harshly punish these titans of industry.Â  If we did, who knows how many jobs could be lost in the yacht manufacturing field?

The most important thing to remember is that no voter will cast their ballot for someone who wants to take more money from them.Â  So be sure to make clear that the lower and middle class will not see any increase in their income tax rate.Â  If it is mentioned that these people will effectively have to pay more because of them having to pay for clean water, healthcare, education, etc. out of their own pocket, well, talk your way around it.Â  Youâ€™re politicians.Â  Just say that Americans must do their part to combat terrorism; itâ€™s worked for us so far.

Remember, liberals = socialists.Â  Even though tax rates were higher after the almighty Reagan raised them eleven times, it is crucial to assert that we are closer to communism under Obama than we have ever been.

(The Ronald asked me to change my name after he wrote my last check.)