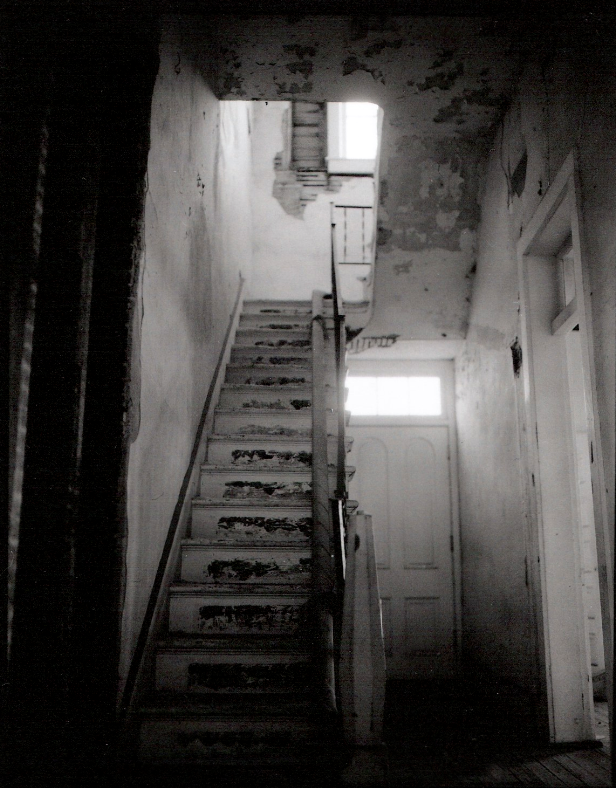 Photographer Lori Oden will be one of four artists included in Istvan Gallery’s opening exhibit this Friday. The photo is from Lori Oden’s series entitled, “A Cautionary Tale.”

Lori Oden, a long time gallery favorite, uses a variety of cameras and printing techniques to capture her images. Oden uses a replica of a wet collodion camera and the negatives are made on glass. Essentially she makes her own film. Prints made from this negative are done in platinum and palladium, which are also 19th century methods of film processing. Oden also uses lithograph prints.Â  All these methods of capturing an image lend themselves to a specific, weathered look. The lithographs have a warm brown note to them, whereas platinum brings out more black, and palladium yields softer browns. There are also traditional black and white photographs taken with a 4×5 Graflex camera.

Oden said the theme, “A Cautionary Tale,” was inspired by her subjects. As Oden took photos of abandoned buildings, she would create little stories in her head about these locations. She said these stories always took on the cautionary nature found in ghost stories and urban legends. Most of her photos are shot in Oklahoma, although a few were taken at Joyland, an abandoned amusement park in Kansas. Oden tried to get permission to shoot, but ended up going in gorilla-style for “just a minute” to capture her arresting images of a place drained of all joy. Oden said if there are no notices posted on a decaying structure that it seems to her to be fair game for photography.

Virigina T. Coleman has a background that includes design, architecture, painting, and welding. Her work combines architectural lines and abstract sensibilities. Kovash said her work is a bridge between Oden’s and Scudder’s artistic styles. Asia Scutter, along with Coleman, are new to the gallery space. Scutter’s work is a playful nod and a wink to the end of the Mayan calendar and the superstition that 2012 will be the end of the world. Her metal art is wire worked shapes of Mayan mythology. Her work hangs in the space, which gives it added dimension via light and shadow.

Catch the opening reception Friday night from 6 pm – 10 pm. The event is open to the public and if you miss it this weekend, stop by during gallery hours.Â  The show will continue through April 29, 2012.