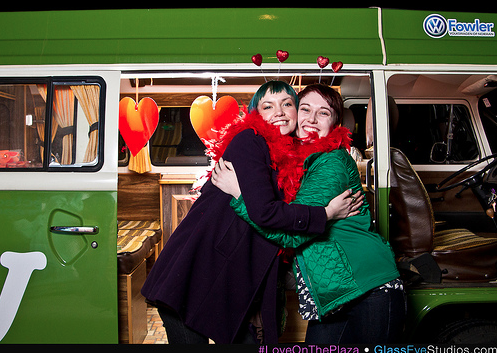 Go make adorable photos at Love on the Plaza this Friday! Photo provided by Event Organizers.

I’m sure there are some bitter, disgruntled love-haters out there, but for the rest of us looking for a little fun this weekend with our families or significant others, look no farther than the Plaza District’s Love on the Plaza. Adorable cuteness abounds as many of the district’s retailers set the stage for what is sure to be a lovely evening of cello puppy-love serenades, lyrical love notes composed of handmade Valentines,Â  and window displays featuring The Gay Agenda. As for the exhibitionists? Don’t worry! There’s a Kiss Cam Contest. Post your best smooches on twitter via @plazadistrict and @FowlerVW, because – as if showing off wasn’t enough – you might win a prize from Fowler VW for tweeting about it.

Alright. Did the mushiness get a little out of hand? It did, didn’t it. Ok, so there’s also “Loving Dead on the Plaza” being hosted by Dig It! This vintage store carries a wide array of creepy cuteness. There’s a whole bookcase of mutilated dolls and if that doesn’t tug at the heart strings of your dearly beloved, there’s jewelry, clothing, and vintage vinyl to dig through. Chastine Edwards and Fuse Hartly will have art work featured there and there’s a chance to win two tickets to the Underground Monster Carnival coming to the Oklahoma City fairgrounds March 3rd.

Feeling gay yet? You should because Cole Dewey Designs will host The Gay Agenda. Dewey said she read about Randy Roberts Potts in Details magazine and was instantly taken with his story as he is the gay grandson of Oral Roberts. Dewey felt affinity for his hardship because she too identifies as a gay Christian. Although Dewey said her family, who are Southern Baptist, have been very supportive of her.Â  Dewey and her wife have a young daughter. And while they can do their best to prepare their daughter to navigate a world that doesn’t accept a family with two mommies, Dewey hopes that by providing her storefront for this performance art piece, she will help change attitudes about gay families.

Watch this video to learn more about the event!

Plaza District
Free to the public
Runs from 7pm -11 pm