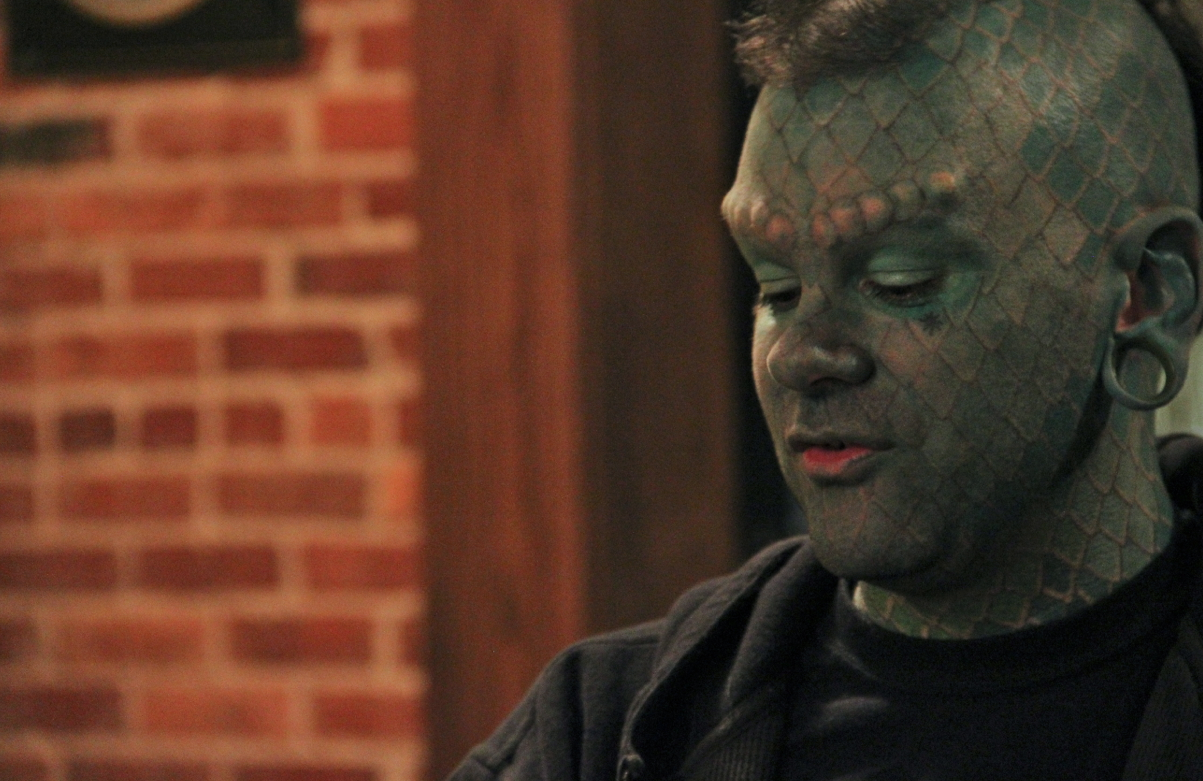 A rare contemplative moment with the Lizardman, Erik Sprague. Photo by Helen Grant.

“So, what the Hell is a Lizardman?” I naively asked my editor Helen.

“Well, he’s like, this guy who does stand-up comedy, and he looks like a lizard or something…”

So began my association with Erik Sprague, the Lizardman. So, what the Hell is a Lizardman? I don’t think I can put it better than Sprague does on his website:

My name is Erik Sprague, but I am far better known as The Lizardman.

I’m that tattooed green guy with the split tongue that you may have seen on television, or as a young lady in South Dakota once succintly put it to me: “You’re that motherfucker from TV and shit, ain’t ya?” That one encounter speaks volumes about what it is like to be me.

I am a professional freak. I perform sideshows acts, stand up comedy, & front a band.

Yep, that’s what the Hell a Lizardman is, in his own Lizard words. I suppose he’s “The Lizardman”, not “a Lizardman”, since there’s only one of him, and he’s so unique that, even if there were more Lizardmen around, he would still stand out. I mean, how many Lizardmen would be able to talk about politics, James Bond movies, beer, the Adirondacks, philosophy, art school, and still be hilarious and down-to-earth? How many Lizardmen would have done doctoral work in philosophy? I’m guessing the answer would still be only Erik Sprague.

Also how many Lizardmen would be conscientious of the other diners at a restaurant when sticking a fork in their nose?Â  Did the fork still end up in this nose, showing off his sideshow abilities? Yes, but still. 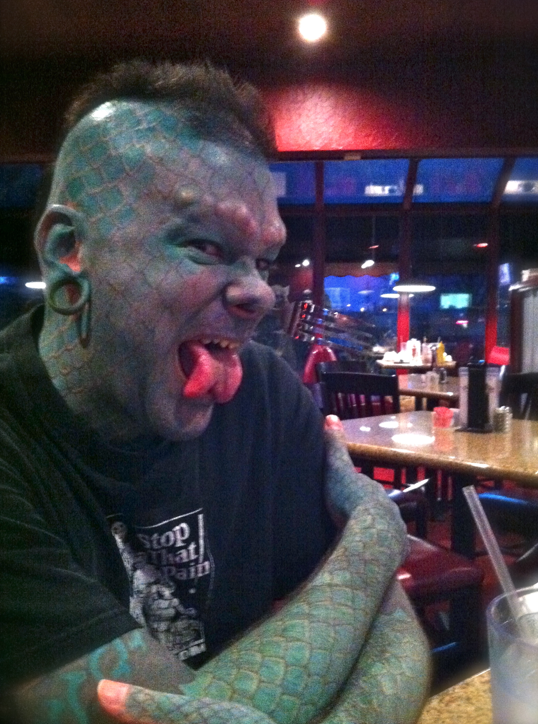 Sprague says, "It's not a trick, it's a stunt." Photo not-so-serriptiously taken by Helen Grant.

Sprague’s influence on the body modification community can’t be underscored; he has been heavily involved in researching and exploring different methods of body modification. He personally did the research for what became the basis for tattooing the whites of one’s eyes. Â In fact, he was the first person to have his tongue bifurcated (or forked), using a surgical procedure he developed through intense research, and convinced a doctor to perform.

Even with all these hypothetical Lizardmen running around, I can say confidently that Erik Sprague would be “The Lizardman”. Between his smart, socially conscious stand-up act, his commitment to pushing the envelope and innovating in the realm of body modification, and his personal experimentation with body modification, he is a [Lizard]man alone.