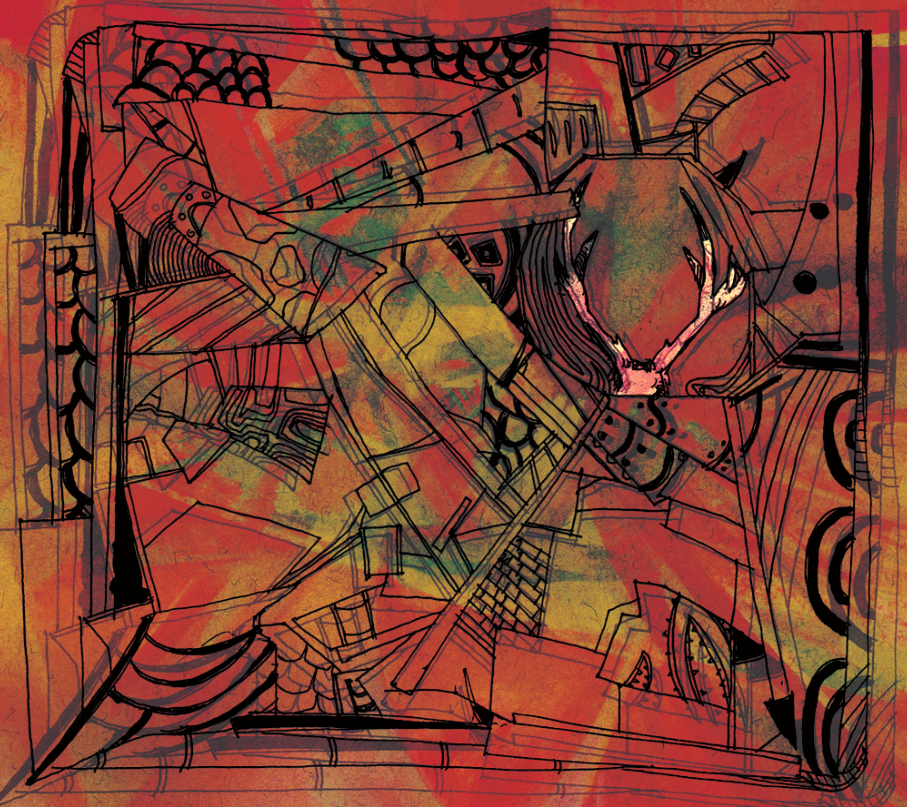 A quick scan of DEERPEOPLE’s biography reveals they: “…simultaneously emerged from a sticky, moist womb and proceeded to rock.”

I love quirky. I’m always searching for music that has an element of playfulness, even if it does skew enigmatic. Extra “quirk” points are awarded if the band has a clear willingness to experiment with their sound yet almost has an effortless flow from the rush to climatic peak to the dissolution of a track as it swirls into frenetic vortex of dissonance.

Still, whatever the reason, I’m just now getting into DEERPEOPLE’s music. It seems like I’ve should have listened to them a lot sooner as I do recall reading about them in Grace Gordon’s 2011 Norman Music Festival piece written for OKC.NET last year. And I remember being told by a set of friends that their live performances were good. The buzz at that time seemed genuinely positive.

Fast-forward from then to now when I discovered, to my chagrin, that I’d let this band slip off my radar inadvertently. It’s prompted me to make up for that lapse by giving both their albums listen, especially since DEERPEOPLE just released Explorgasm. To properly review it, I need to reflect on their self-titled EP in a few sentences. First, this band is deceptively peppy because laced into that upbeat indie pop/rock are some of the most twisted and sardonic lyrics I’ve heard in awhile. Hell, the opening of “New Dance” reminds me of the opening scene in “Me, You, and Everyone We Know.” It’s fiery. Last, any sonic hints at psychedelia on that first album seem emergent when compared to the kind of developmental shift taking place on Explorgasm.

When comparing the two albums, I’ve got to admit that I like the direction they took on Explorgasm. Which isn’t to imply that the first EP isn’t worth listening to, because it really is good, but Explorgasm takes their catchy percussion-driven indie rock and proceeds to drench it in aural textures. Sonically, it conjures the image of sonar bouncing off the sea floor, which is then reabsorbed into an abyss of discordant reverb. Notes ping around and then are swallowed back up again. And that’s what makes it a stark contrast to the first album in a lot of ways. Even the reprisal of “Dr. Gay Washington” gets a serious makeover in “Dr. Gay Washington Pt. 2.” Notably there’s the use of a female lead in Pt. 2, which is not prominent at all in the first album. Additionally two of the five songs are sung in French. On these tracks I kept drawing comparisons to another band, for instance, I thought more than once if Camera Obscura’s Tracyanne Campbell ever had a reason to sing in French that I’m pretty sure she’d sound similar to DEERPEOPLE’s Kendall Looney singing “Des Bonbons Et Des Pipes.”

But cycling back to Explorgasm’s first track, “Ulysses,” there’s a cascade of electronic mania towards the end of the song, which almost echoes with the kind of devotional imagery being presented in the lyrics. Another track, “Jesus Christ,” delivers a reverential earnestness reminiscent of good old hymns much like “Go Tell It On The Mountain.” Even so, the track has a pervading sense of embittered self-awareness with lyrics such as these: “We believe that we were the tyrants of another age/And we kept our souls full of grace/And we will rejoice/Help us now/We know not when we will see the other side/We kept our clothes and lullabies that we will rejoice/ We freak out my Lord/Thank you God for dying young.”

If Explorgasm is the slightest bit cohesive, it’s because of the way DEERPEOPLE have evolved their sound. Lyrically it’s a hodgepodge, but I don’t find that to detract from the album as a whole. I think randomness has its place even if it is not immediately understood, it still maybe appreciated for what it is. For example, why the use of French? Who the hell knows. I kind of speak it, but with even less skill now than when I took a semester of it in college. But do I think “Des Bonbons Et Des Pipes” or “The Candy and the Pipes” is pretty amusing as far as a whole track goes? Yes! Is the imagery of someone being likened to a “school bus,” and who will go onto take the song’s protagonist out into the wilderness, in “Ulysses” somewhat bizarre? Sure. But you know what? It’s still catchy while being both charming and endearing. And what about being clearly peeved with a God that died young and who will never suffer through an entire lifetime of needling doubt? I find that I can appreciate that perspective too.

I like how far they’ve developed since their first EP, so much so that I’d like to catch DEERPEOPLE play the Opolis Jan 20th along with The Non. Check them out online via bandcamp.com where you can download both albums for free or slide a few bucks their way if you like what you hear. Full disclosure: I paid for my download of Explorgasm.