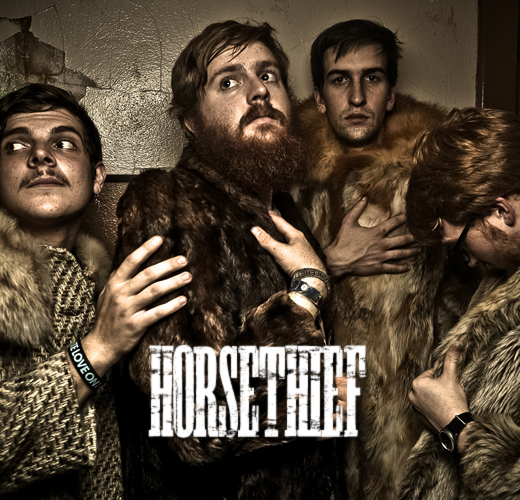 â€œI felt the winds come sweeping through the plains of Oklaâ€”homa.â€

High in the mountains of Colorado, Cameron Neal, Danny Rose, Preston Greer and Cody Fowler hiked the Horse Thief Trail. Back at Nealâ€™s family cabin, the quartet was recording a new album, but it was on the trail that the bond of brothers formed and a new name for the band was found. The reedy thin echoes of high altitude can be found in their music, but the lyrics reflect life on the plains. This is mountain music brought to sea level for stargazers and those searching for Old America.

Neal, Greer and Fowler hail from Denton, Texas. Their original band was The Tellevators, which they played in for three years before they decided it was time for a change. The trio embarked on a career making venture by attending ACM@UCO in Oklahoma City, and were able to successfully move to the city together. It takes a lot of determination to plan and execute a move to another city, but when all three of them were accepted to ACM, they jumped at the opportunity. â€œWe knew when we moved, that weâ€™d need to find a fourth member to fill out the sound on stage. Within 6 months, we met Danny who plays keyboards for us now,â€ says Neal. â€œIâ€™ve known Preston since 5th grade, and I met Cody in theater in high school. Danny fit right in with us.â€

The four members of Horse Thief are not only bandmates, theyâ€™re close friends. Theyâ€™ve had to start over together, in a new city. Theyâ€™ve also had to establish themselves as insiders in an insular community of bands that have known each other and played with each other for years.

This year marked the turning point for the band. Earlier this year, they played the ACM Showcase at SXSW, and later caught a gig with Colourmusic. Playing with Colourmusic allowed them to be discovered by local music lovers who resonated with Horse Thiefâ€™s honest sound, The buzz surrounding the band started to grow. After playing with DEERPEOPLE, The Non and Mannachine, Horse Thief found themselves in the middle of a community of like-minded musicians. And, in this city, thatâ€™s sometimes all it takes to get somewhere.

Horse Thiefâ€™s music is described as psychedelic folk rock, a label that is probably pretty accurate as far as labels go. However, when youâ€™re dealing with honest music thereâ€™s always a deeper message. Horse Thiefâ€™s thoughtful approach to their craft is one factor that sets them apart. â€œWhen you listen to our music, I want your spirit to go back to Nature â€“ where all our instincts come from,â€ shares Neal. â€œThat natural raw sound in our music is one of the ways I set myself free. This music is how we feel â€“ how I feel.â€ Horse Thief wields music like a therapy session. They see its intent as catharsis, so as the band pours out their heart on stage, the idea is that the audience will react in a similar way. Neal goes further to share, â€œI want people to leave feeling different, feeling freer. Music is a fantastic emotional release.â€

He discusses the trend in bandâ€™s with animal names. â€œItâ€™s a desire to return to nature.â€ Because weâ€™re exhausted by modern day stresses and technology and poor communication? â€œYes, exactly. We want our lyrics to open peopleâ€™s eyes to the beautiful things on this earth.â€ For the world weary, Horse Thief is a refreshingly honest and earnest sound. This isnâ€™t music meant to be listened to within the confines of headphones and car stereos. This is music meant to be played around a campfire under a blanket of ancient astronomical light.

For all their sincerity, Horse Thief is a band that still loves to have fun. Their hilarious reputation for getting shut down by the cops has made them something of a legend in the local scene. â€œWeâ€™ve gotten shut down five times by the Oklahoma City Police Department,â€ Neal laughs. â€œEach time, when we get shut down, itâ€™s always during our anthem to Oklahoma, â€˜Warriorâ€™.â€ For instance, one night they signed on last minute to play a joke show on the sidewalk outside of the Bricktown IHOP. â€œIt was 1am and there were maybe 30 or 40 people there,â€ Neal recalls. The hotel across the street called in a noise complaint, and the cops showed up. The band doesn’t mind the authorities showing up, as it’s often a sign that you’re doing things right. It’s not rock without a little irreverence.

On December 10th, doors open at ACM@UCO and all the bright young things in the city will be flooding in to catch Horse Thief and opening acts The Non, DEERPEOPLE, and Feathered Rabbit. Horse Thiefâ€™s debut album â€œGrow Deep, Grow Wildâ€ will be released at the show. Everyone who buys a ticket gets a free CD. When you get that CD, pay close attention to the end of track nine. The band recorded this track in a church, in order to capture that â€œbig organic soundâ€. They noticed that this track picks up some strange noises from the drum mic. â€œIt sounds like backwards talking,â€ says Neal. The same night they were recording, a friend who had accompanied the band to the session swears he saw someone on the stairwell of the church. Horse Thief may be the only band in Oklahoma to have a recording on their album from a haunted church, but somehow that seems completely apropos. Whatever theyâ€™re stirring up with their raw, urgent sound contains metaphysical echoes of the past.