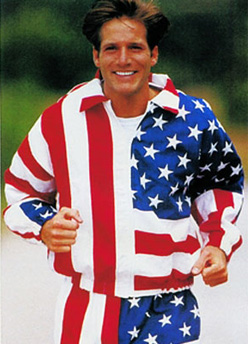 This is how we dress in Real America.

One November day in 2011 at Kerr Park, a driver going the wrong way on a one way street yelled out his window,

The hippies yelled back,

Now look. I know that these bleeding hearts were just trying to help the guy out. But they totally missed the point: that you can make a social statement in a much faster and climate controlled way than gathering in a dead industrial iconâ€™s previously abandoned city square. Instead, try blazing past that former ghost-park in an SUV with the window cracked. But only cracked!!! Because itâ€™s cold, and because God only knows what those little tent-urchins might toss in the window. A â€œdecriminalize marijuanaâ€ flier? Pine cones all filled in with peanut butter and granola to hang from a tree? Lukewarm green tea from a supersoaker? This dangerous kind of creativity goes on for daysâ€¦_____ days, to be exact. (Fill the blank in yourself. I donâ€™t care to find out how many.)

Drive quickly past and tell them theyâ€™re stupid. With enough repetition, they should catch on. But donâ€™t worry about accidentally identifying with them. Itâ€™s different from actually protesting something because youâ€™re in a car! Report all peaceful assembly or similarly crunchy activity to the police. Your income has been taxed to arrest kooks. Might as well use most of it- almost all of it- here. And whoever is in charge of dispatching this cityâ€™s finest should make sure they send the really mean ones. The ones who wear lots and lots of Kevlar against possible flying Frisbees and who are the most self-conscious about their own penis size, perhaps? I said that mean ones are preferred, although I admit that it may break the ice between civilians and officers if the latter bring gifts ofâ€¦food product. (Think mustard gas.) Itâ€™s like Iâ€™ve been saying. If someone is serious about changing things for the better, he needs to just go at the system from THE INSIDE. Itâ€™s like being an undercover spy. Just learn the phrase â€œupward mobilityâ€. It takes the most worthy of men straight up to the lower-middle!

Granted, on THE INSIDE, a man might have to

For his grand finale, heâ€™d write an article describing the pure, nefarious, evilness of the Occupy movement. The article would have to be poorly worded and regurgitative (new word!), as though an underachieving zombie had written it. Is it hard? Yes. Take it from me. But pick yourself up, dust yourself off, and bust that tail. (No, not literally. You have to go to work at the office, remember? Plus I hear Blue Lincs may be scaling back on spinal injury coverage.) I realize that employment rate among these â€œoccupiersâ€ is the same as among the general populace, but I prefer we keep that under our powdered wigs. Letâ€™s remember that brave driver who went the wrong way on a one way street. Because he did it on purpose.

Well done, Oklahoma. Iâ€™ll drink the blood of the innocent to that.