Some time ago, writer Daniel Page, his girlfriend Amanda Ashby, and other assorted friends and family had a terrible meal at a metro area restaurant. They promptly escaped, and began to look for something better. Today, still wanted by the government, they survive as soldiers of fortune, going to a different restaurant for brunch every Sunday. If you want some pancakes, if no one else can help, and if you can find them, maybe you can dine with…The Renegades of Brunch. 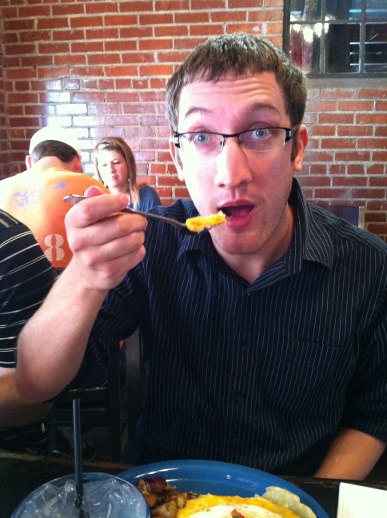 This week, the Renegades of Brunch Are:

I am not a foodie.Â  I can’t help but read that in the jowly, gruff, voice I do for my Terrible Richard Nixon impression.

I’ll let you meditate for a moment on the fact that I even have a Terrible Richard Nixon impression in the first place. (Editor’s Note- I’m not sure how old Daniel Page is, but he either was not yet born when Nixon was in office, or he is the Highlander. )

I can’t do voices, not really, and I probably wouldn’t do them if I was any good at them; I think everyone has a “friend that does voices”, and it’s usually obnoxious. I really don’t want to be That Guy. My arsenal of terrible impressions consists of Terrible Richard Nixon, Not Really Bobcat Goldthwait, and an awful cockney accent; their primary use is annoying my girlfriend Amanda. At any rate, it’s fun to do Richard Nixon, for whatever reason. Go ahead, try it: I am not a foodie.

But I digress. Let me try again: I am not a foodie, and my aim for this column is to write restaurant reviews for people that aren’t foodies, either. Regular food reviews are great, but they seem aimed at people who either know (or pretend to know) quite a bit about cuisine. I’m not really an expert on food or drink; I like to think I have good taste, but you never really know, do you? Amanda and I decided a few weeks ago to start going around to different brunches after attending church at St. Luke’s United Methodist Church downtown, but we didn’t know about which restaurants served brunch, and which of the ones that did were good. This is an attempt to remedy that, and to help anyone that’s interested in seeking out new things. 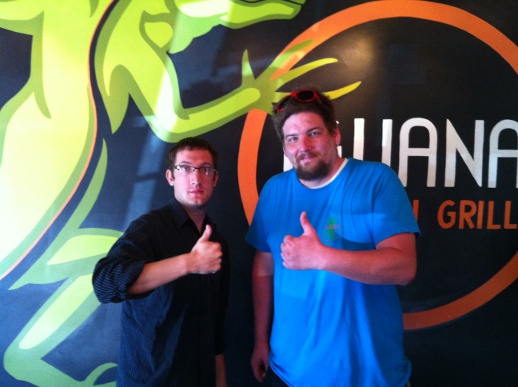 For our first week, we decided to go somewhere we’d actually been before for brunch, Iguana Grill. Our rationale for this was that it we knew we would like it, and it might be good to have a positive start to our odyssey. We arrived at about noon. Iguana Grill wasn’t too crowded, and we were seated immediately. Our server was named Chris, had red sunglasses on top of his head, and was outgoing and gregarious. He also had a beard. He took our drink orders (waters all around, with Sydney and myself getting mimosas in addition). The mimosas were good, but not as sweet as I was expected; they had a refreshing, crisp dryness, and were pleasantly tart.

I asked Chris with a Beard for a recommendation, and he said he likes to work Sundays so he can order the Enchiladas with Eggs after his shift; he also recommended the breakfast burrito. While we waited for our food, complimentary chips, salsa, and tortillas (both corn and flour) were provided. The salsa was chunky, and had a fresh flavor. The following exchange took place between Amanda and her older sister Sydney: 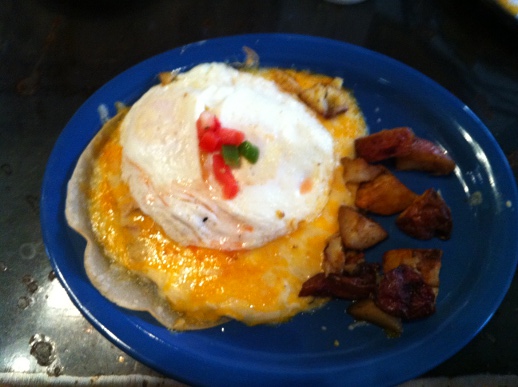 Sydney: These are really good, I like white corn tortillas much better than yellow.

Amanda: That’s because you’re a racist.

Our food arrived quickly, and all of the orders were correct, including Apryl’s myriad requests.

Here is what the Renegades ordered:

-Daniel- Enchiladas with Eggs [ with chicken and sour cream sauce] 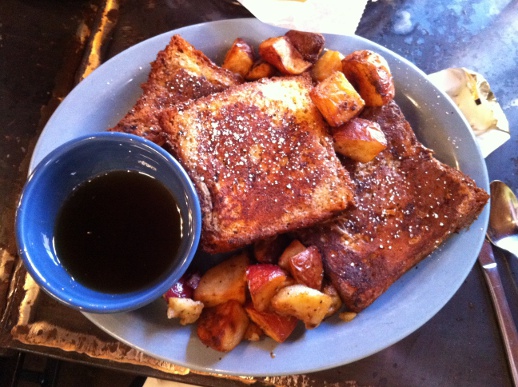 There is not a good reason for you not to be eating this right now.

-Apryl-Breakfast Burrito [with too many alterations to keep track of]

Upon receiving his plate, Amanda’s younger brother Alex squealed with delight as he discovered bacon in the green beans he ordered. “I think putting bacon in something is better than not putting bacon in something,” he told me as we began to eat. “Also, you should say I said something was piquant. That’s a good word.” The enchiladas with eggs, which I ordered based on the recommendation of Chris with a Beard, were excellent. When they arrived, Amanda offered to trade me dishes, but I declined.Everyone was pleased with their food, and left satisfied.

I highly recommend Iguana Grill to anyone who likes breakfast food, Mexican food, or wants to try something different.

Tom Ashby, Amanda’s father, suggested we go to Burger King to get Croissanwichs instead. At the coaxing of his wife Apryl, he begrudgingly came along. The following are his thoughts.

Grumpy Old Man Rebuttal: It’s always nice for a restaurant to have free wifi, especially on Sundays so I can track fantasy football. Iguana Grill doesn’t, but Sara Sara Cupcakes does next door, so no problem there. I didn’t know what chorizo was, but I liked it. I would come back here for brunch if I missed breakfast time at Burger King.