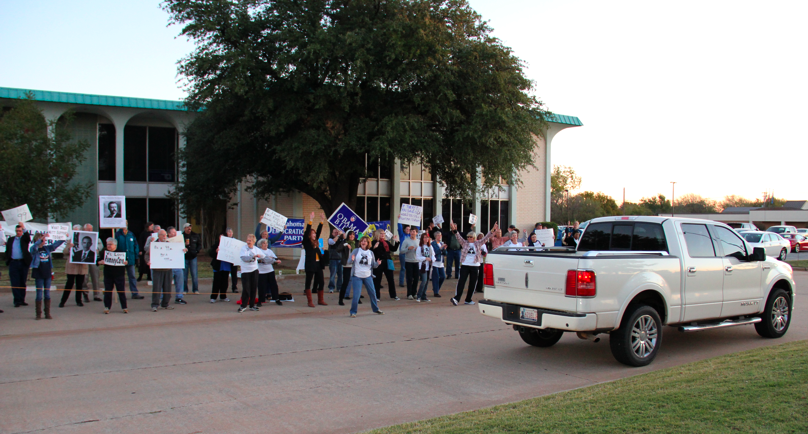 A flash mob dances as cars pull into the Jim Thorpe Association & Sports Hall of Fame parking lot. The question remains: did those attending Mitt Romney's speech pay attention to these protestors? Photos by: Helen Grant

Former House Representative of District 45 in Norman Wallace Collins said, â€œWe are here today because we want to give the 99 percent a voice. And we certainly want to welcome Mitt Romney to Oklahoma and we want him to know Oklahoma is full of friendly people. And that we support Romney Care and we want it for the nation.â€

Collins said Romney Care was the basis for the national health care initiative President Obama passed and when Mitt Romney was governor of Massachusetts he supported it, but now in his bid to win the GOP presidential nomination Romney is distancing himself from the plan. 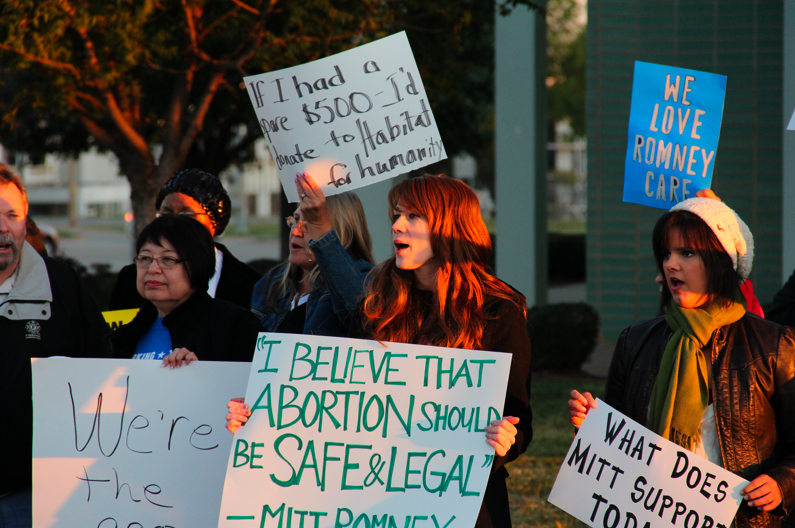 Protestors from a variety of organizations wave signs that range from being the 99 percent to supporting Romney Care. Photo by: Helen Grant

Although there were many groups rallying, some demonstrators had more attention grabbing signs than others. Johnny Mansfield, who held a pitchfork, said he chose the farm tool because it is a traditional sign of protest. He said his choice was meant to be purely symbolic and not offensive. 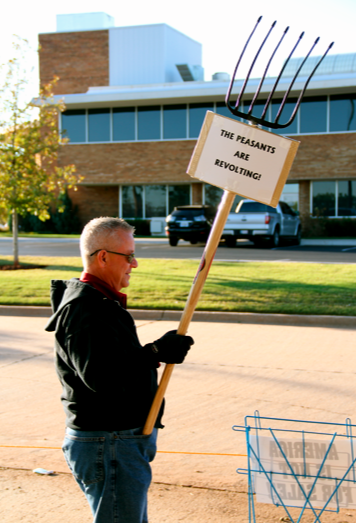 â€œIf youâ€™ll notice Iâ€™ve got the plastic covers permanently glued on so no one gets hurt,â€ Mansfield said. His choice seems a stark contrast compared to Tea Party rallies held across the nation where protestors with permits brought their guns to demonstrate. Photo by: Helen Grant

Mansfieldâ€™s choice of pitchfork may be considered provoking, but does it detract from the overall message? Earlier OKC.net received a comment on our Facebook page that questioned if these demonstrations did anything to change opinions. After interviewing a handful of attendees at Romneyâ€™s public speech, it seems the answer is that no oneâ€™s opinion had been changed. Rather all those interviewed either chose to enter Jim Thorpe Association & Sports Hall of Fame to attend Romneyâ€™s speech through doors that by-passed the demonstrations altogether, or if they had driven by the demonstrators, they chose to ignore them.

But what do these demonstrations, be it the rally at the Oklahoma Democratic Headquarters or those who rally at Kerr Park with Occupy OKC, do if they canâ€™t seem to change their oppositionsâ€™ mind?

Mansfield had this to share on protesting, â€œI think every act of protest has an effect. I think non-violent protest is the way to go. I believe it was Gandhi who said â€˜first they ignore you, then they laugh at you, then they fight you, and then you win.â€™ If you look at the Occupy Wall Street protest you can see thatâ€™s exactly what happened. They were ignored for a week, for two more weeks they were ridiculed, and now the powers that be are taking notice of them and now they are trying to fight. They are fighting to keep control of the country and to keep most of the money.â€

Mansfield listed statistics that have informed his position. He said the Census Bureau reported in 1973 that the median income of a male worker who worked 40 hours a week, once adjusted for inflation in 2010 dollars, earned $49,000 a year. The Economic Policy Institute, a non-partisan think tank that examines economic policies that effect low to medium income earners, reports that worker productivity has gone up 80 percent. He calculated, based on the figures, that he should be earning $95,000 a year for being 80 percent more productive. But Mansfield said the 2010 census figures find todayâ€™s male worker working 40 hours a week earns $47,000 a year.

Coming back to the main point, Mansfield said protest is not about promoting civil unrest as much as it is about circumventing a situation like a wide scale rebellion by stirring national debate and drawing attention to the issues. But there were those who chose to ignore protestors. 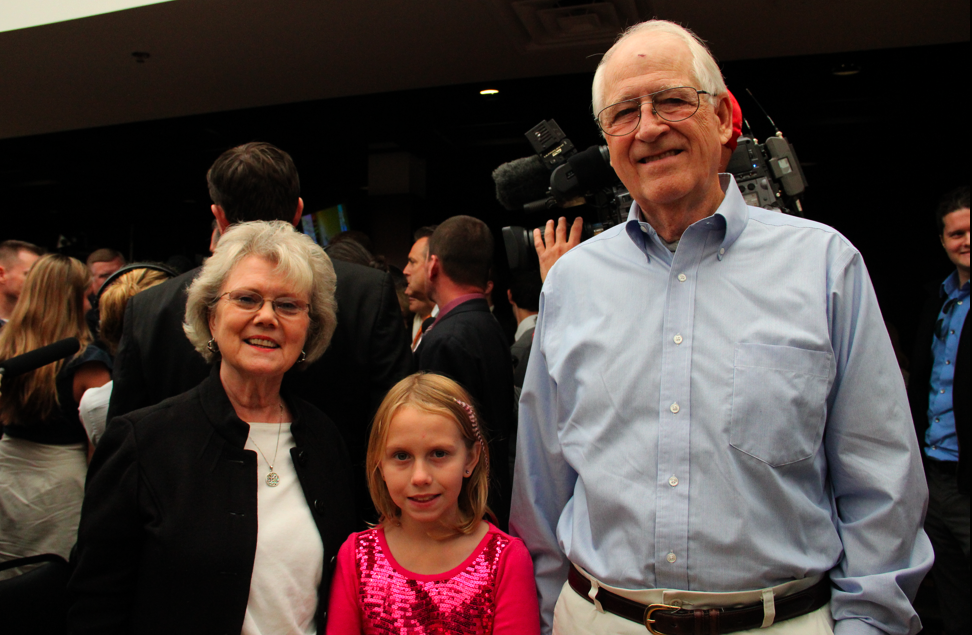 Linda Wright, Keith Wright, and their granddaughter Molly Frazer attended Mitt Romneyâ€™s speech. Mrs. Wright was optimistic that her granddaughter get a chance to see the next president. Photo by: Helen Grant

Mrs. Wright: â€œI liked it very much. I thought he had a lot of good points, with the taxes and deregulation and carrying through with some promises. I was very pleased with it.â€

OKC.net: â€œDid you see the protestors on your way in?â€

Mrs. Wright: â€œWe saw some out on the median.â€

Mrs. Wright: â€œThe policy on the regulations I find will help business a great deal and I think help the economy. That one in particular.â€

OKC.net: â€œWhen the collapse of the financial system happened in 2008, did you experience any fall out?â€

Mrs. Wright: â€œWeâ€™re retired so the only fallout that weâ€™ve experienced is the stagnation of our income, because we are on a fixed income.” 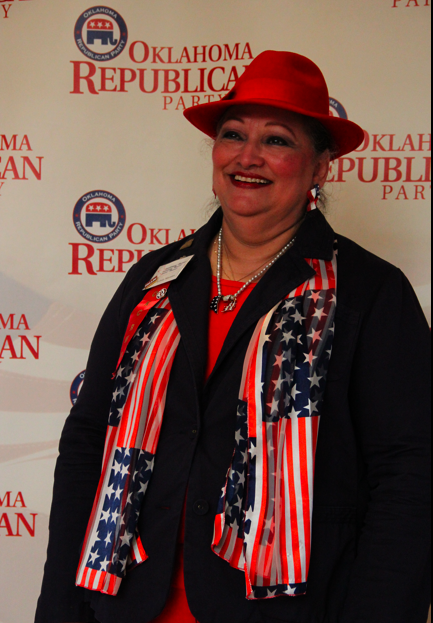 When asked if she saw the demonstrators as she drove into the event, Morales said yes, but that she didn't bother to look at the signs. "They're in another world," she said. "There's not any reality to what they have to say." Photo By: Helen Grant

More interviews were conducted.Â  Sylvia Morales, who said she is one of a select few to have been awarded byÂ  Freedom’s Foundation of Valley Forge a George Washington Medal of Honor for her volunteer work in the community this year, said she served as a former president of the Oklahoma City Republican Women’s Club, and now serves as the third vice-president of the Oklahoma Federation of Republican Women. Morales said she watched C-SPAN and Fox News and did not prefer local channels because of commentary on the issues. Rather, she attended the speech that morning to hear directly from Romney. When asked which policy she supported most, Morales said she agreed with Romney’s views on deregulation and wanted to see at least half of the regulations on businesses, especially those to do with the Environmental Protection Agency, deregulated.

“Abolish the EPA,” Morales said. “for people to think that industries aren’t doing the best for themselves just seems ridiculous to me. We have more forested land now because of the wood industry. And there are going to be rouge people, but we have laws now that take care of them. But for general purposes, each industry really does police themselves, like the gas and oil industry in our state. They know what’s best for their industry.”

This naturally lead to a question about the Occupy Wall Street movement because the banking institutions were not operating under regulations that would have prevented some of the high risk and not-at-all transparent business practices that ultimately ended in a huge bailout for these banks. In essence, the banking industry did not do a good job of policing itself.

Morales said most of the Occupy Wall Street protestors were, “snot-nosed kids who are supported by trust funds. They have not worked, similar to our President right now, have not held jobs in the industry and have not worked to earn a living, to support a family or themselves. And they are being mislead by the unions.” 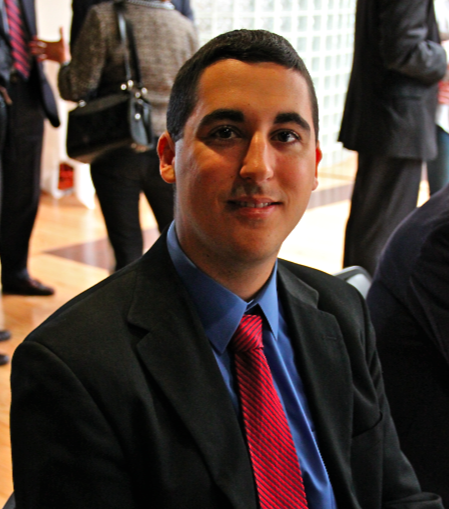 David Jenkins did not see the protestors nor their signs about Mitt Romney's initial position on universal healthcare, but nevertheless Jenkins was willing to talk about "Romney Care." Photo by: Helen Grant

Clearly from one side of the street to the other there are disparate views. But the interviews did not stop with Morales. David Jenkins is a first year law student at the University of Oklahoma. Jenkins said of the Republican candidates vying for the GOP presidential nomination that he supported Romney. And although he didn’t see the protestors, Jenkins said he was very familiar with Mitt Romney’s policies and where Romney stood on the issues being debated.

OKC.net: “The protestors on the other side of the street are upset with Romney’s change in position on universal health care, and have been shouting that they were in favor of ‘Romney Care.” What are thoughts on Romney’s new position as it stands now?”

OKC.net: “How did those changes differ from his original position and in what way were they not a good compromise?”

Jenkins: “I don’t know all the amendments that the Massachusetts legislator filed, I just know that what went in was not what came out. As for Obama Care, the national healthcare reform that was passed, I do believe the individual mandate is unconstitutional.”

For those not familiar with the distinctions between “Obama Care” and “Romney Care” Factcheck.org, a non-partisan website, researched the differences between the national initiative and what Romney signed into law in Massachusetts.

“Both laws have an individual mandate, requiring persons to have insurance or pay a penalty; subsidies for low-income persons; an expansion of Medicaid; an exchange where individuals can buy insurance; and requirements for employers. But the national law puts a greater emphasis on small businesses by providing tax credits for those who want to offer insurance, and it includes many potential cost-control measures that Massachusetts lawmakers are only now tackling in separate legislation. Yes, those are largely experimental ideas, and as weâ€™ve said before, itâ€™s unclear whether the bundled payments and pilot projects President Obama touts will have a big impact on costs. But the national law included many steps aimed at decreasing the growth in health spending, while the law Romney signed purposefully did not.”

Coming back to the protestors, does the symbolic use of a pitchfork, flash mobs and chants change views?

But here is the simple truth: these are the people who were willing to get up very early on Friday morning and exercise their political rights as voting American citizens. Whether they are well-informed or not, they believe strongly enough in our democratic process to show up and either symbolically pay the $20.12 to Mitt Romney’s political campaign or gather in front the Oklahoma Democratic Headquarters in the cold pre-dawn hours to wave a pitchfork in the air demanding change and political accountability.

Yet between these diametrically opposed view points, can we as a nation ever expect any meaningful compromise that will bridge widening gaps in political ideology or will the divide continue to grow as politicians use sound-bite friendly rhetoric and other political tactics, like negative ad campaigns, to further polarize the issues we face as a state and as a nation? For now the outcome is uncertain, but in the wake of protests and rhetoric, maybe it would be good to every now and then listen to an old Woody Guthrie song and meditate on the lost art of compromise.

3 comments to “This Land Was Made For You and Me.”