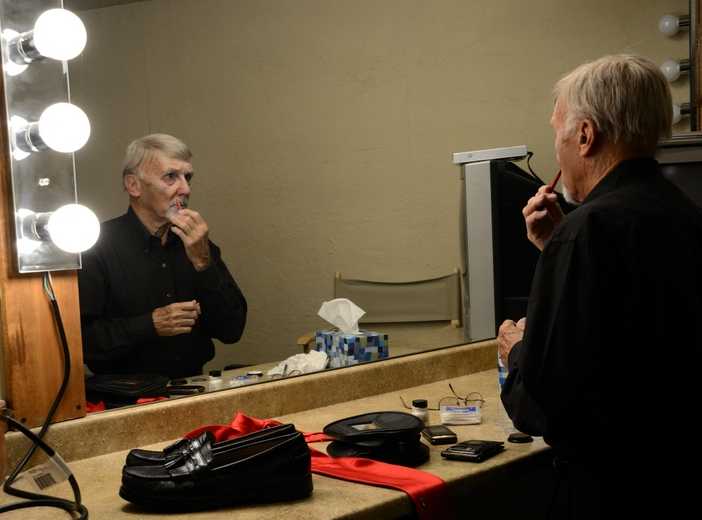 “How often does a grown man get to pretend to be Bela Lugosi? Not often enough.” -Neil Gaiman. John Ferguson prepares to take the set as Count Gregor. Photo by: Gene Glasser

I can’t explain it. I am apprehensive to be an apologist for a counter-cultural movement born out of the fears and the zeitgeist of the black and white generation, but here I am some sixty years later a dyed-in-the-wool “monster kid”, member of the flock who find our shepherds in the horror hosts and a devotee of the B-movies they brought to us. I am among the thousands of fans with stacks of “Famous Monsters of Filmland” and “Fangoria” piled next to an open E.C. horror comic with its own host, the Cryptkeeper pointing his gnarled finger towards the two-headed baby on the next page.  It is a cult following that can’t be easily explained. If you get it, you get it. If you don’t then you likely never will. 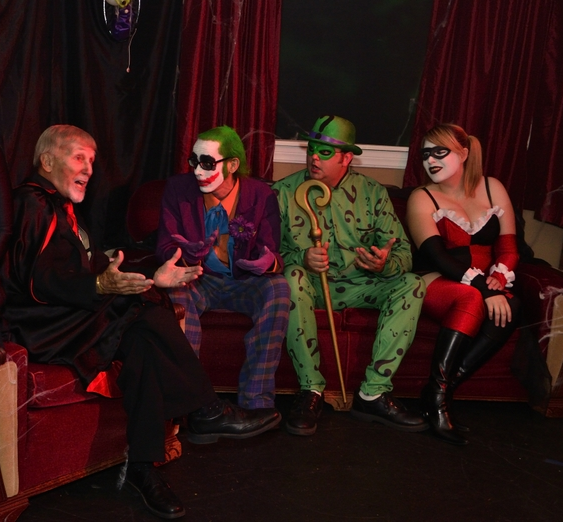 "It was a time on television when horror hosts mingled with kiddie-show clowns, afternoon heroes of sci-fi adventures, sock-hop DJs, and live wrestling announcers." Photo by: Gene Glasser

It comes from another era. It was a time on television when horror hosts mingled with kiddie-show clowns, afternoon heroes of sci-fi adventures, sock-hop DJs, and live wrestling announcers. Like rockabilly revivalists and modern pin-up and burlesque babes, there is a whole new generation taking on the mantle and trying not to let the chills and thrills die, but what we cannot do is recreate the world of a generation born in the shadow of the atom cloud. Sure we have our own terrors and nightmares (terrorism being only one) but it is with some touch of nostalgia now that we can look back on the early 1950’s and the great grandfathers of the modern horrorheads with sincere appreciation of being the first to bring to us through the eerie glow from the one-eyed monster known as television pulsating brains, battling giant monsters, and creeping horrors of all sorts. 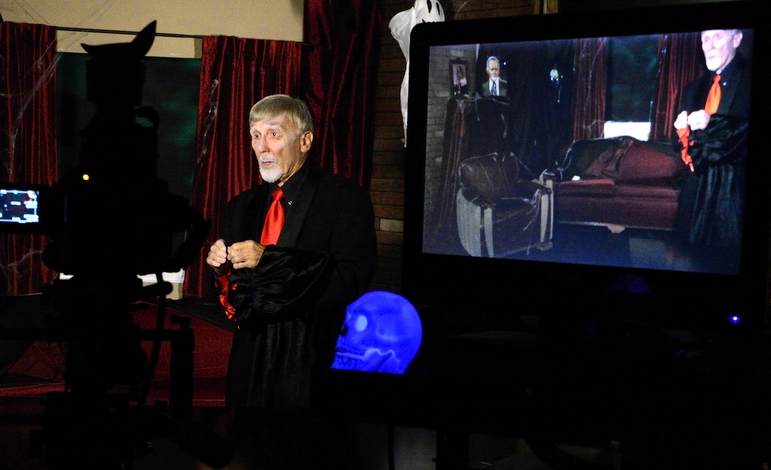 The horror show has come a long way since 1953. Photo by Gene Glasser

I am talking here about the horror show hosts. It is generally accepted the first horror host came in the form of Vampira, who hosted  low-budget suspense films in 1953.  In October 1957 old Universal horror movies were syndicated to television in a collection known as “Shock!”, which encouraged local outlets to host these movies and from then on all across the nation new legions of creepy “Uncles”, “Earls” and, of course, “Counts” arose as weathermen and booth announcers rushed from their day jobs to another part of the studio so that they too might bring their alter egos to life. “Shock!” was followed by others like “Creature Features,” which added to the growing plethora of traditional monsters, the Hammer films, the Toho Studios, the Japanese giant monsters and other schlock B-movies well into the 1960’s and 1970’s.  These monster show hosts continued into the 1980’s and where they became a part of my own childhood. Although it comes from another era, it feeds into something larger that lurks in the dark shadows of our minds. 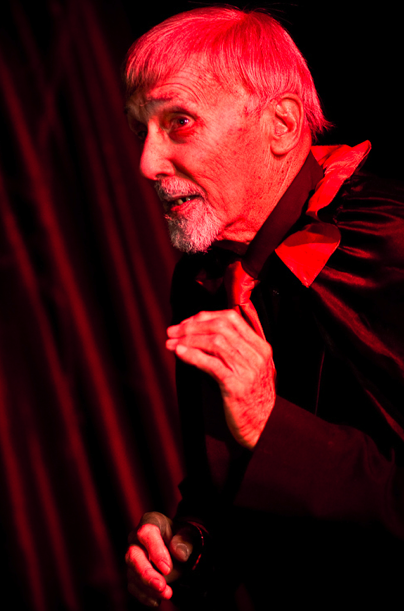 "I vant to drink your vlood!" Photo by: Lacey Dillard

In Oklahoma City, we have our own horror host, John Ferguson. He had been a small town kid from Indiana, the proverbial 90lb weakling by his own account. He worked as a naval typist to “giving the whole Hollywood thing a go for a few years” and eventually settling into Oklahoma as an announcer in radio and the early days of live television with NBC affiliate, WKY Channel 4. John Ferguson was able to secure a role on the weekday afternoon “3-D DANNY” show, which was hosted by local television legend Danny Williams (Williams had served as a mentor for Mary Hart of who co-hosted Entertainment Tonight). Ferguson got the role after experimenting with make-up. Originally inspired by Ming the Merciless, Ferguson created Duke of Mukedom who was the archrival for Danny D. Dynamo, the show’s star. In an era of live television and non-existent production budgets, John found himself playing multiple roles on the show as he mastered voices and villainous poses. John was asked by station management to experiment with his make-up kit again, much like he did to get on Danny’s show, and invent a character who would host late night horror movies for the “Shock!” package of films. John’s career as “Count Gregor” (an –e was added at the end somewhere along the line) began on a Saturday night, May 10th 1958 at 11:30 p.m., which on-air immediately after live-wrestling hosted by Danny Williams. 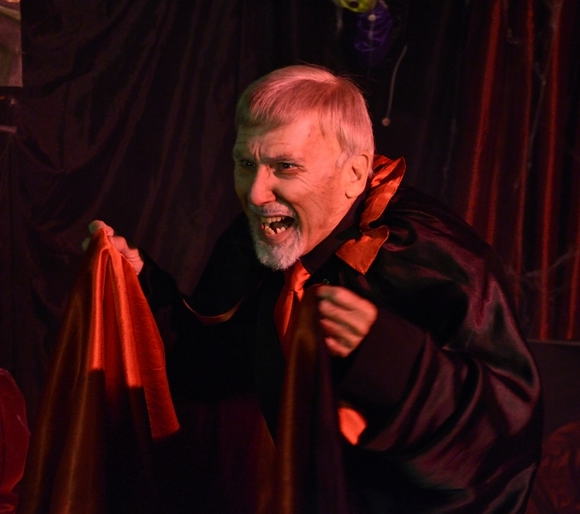 “Shock!” morphed into “Thriller” in 1962 and aired at midnight. In 1964, John switched networks to KOCO channel 5 and his program became, “Nightmare Theatre”, which aired through 1972.  In 1973, John returned to WKY and the Count was seen on “Sleepwalker’s Matinee” until 1979. The national package known as “Creature Features” followed.  The Count moved again to “Count Gregore’s Horror Theater” on independent channel KOKH 25 and then to KAUT Channel 43 and “Saturday Horror Theater” which ran until 1988. Count Gregore’s thirty year run with local television leaves him well-remembered and he continues to be recognized by fans today.
Which brings us to present day.
Like rockabilly revivalists and modern pin-up and burlesque babes, there is a whole new generation that is not ready to let go of this classic part of American culture. The Count has made appearances on KAUT’s “2 Movie Guys” hosted by Lucas Ross and Ryan Beldgardt. He has also mentored a whole new generation of hosts such as Brian Young aka Dr. Fear of “The Mysterious Lab” and also Gordon Grimly of the groovy internet radio program, “The Grimly Show”.
John Ferguson has become my close friend, but it is without bias that I declare in the world of late night horror hosts our Count Gregore to be among the top of the heap.  John jokes with me, “Count Gregore is the creation that wouldn’t die!” He gives a thoughtful pause before concluding, “Nor would we ever want him to…” Local channel, KSBI 52 will be airing a Halloween special and has already sold out every single advertising block. It is NOT an easily accomplished feat for a small channel built on a “live and local” philosophy to sell all it’s blocks of advertising from 11 p.m. to 1a.m. Rather it is able to achieve these sales with the help of an internet following that refuses to let the legend of Count Gregore die. It has been said that these sorts of horror hosts are irrelevant in the new century and are seen by most as a part of television history. Why is it that so many are clamoring to see the Count reborn yet again? Now on KSBI, John brings back the camp and hosts a public domain piece of schlock, “The Brain that Wouldn’t Die” (shot in 1959, but released in 1963) with bits produced on a budget that cost practically nothing. KSBI was willing to air but not produce what is being billed as “Count Gregore’s Nightmare Theatre”. John is recycling the same title sequence from his 1960’s “Nightmare” series. The program was produced by John Ferguson using a production studio volunteered by Boiling Point Media’s Hugh Hale and a cast and crew of friends (such as Ryan Beldgardt behind the camera and even myself operating the fog machine and helping to decorate the low-rent set with Halloween store finds and random junk). John writes (and mostly adlibs) the bits that borrow vaudeville style oneliners and wacky horror silliness.

Yet, it still works.
The secret as to why it works might come from remarkable X factor, much like in the movie where the mad scientist refuses to let his love die and hunts the night for replacement bodies for her brain. Quite simply: the fans refuse to accept mortality of John’s creation. The Count is our love and we will not let him die or else that inner-child bundled with and blankets on the basement couch munching popcorn and jumping at shadows will die too. That is something that we will not let happen, born in the shadow of the atom cloud, creeping through the smoke of the sixties, discoing through the seventies and nearly fading into obscurity in the eighties and nineties…our Count is a part of our regional culture that must not be forgotten. So here we are in the last days of 2011, ready to bring our own trick-or-treating spawn before our big-screen plasmas with their fresh haul of Halloween candy to watch John Ferguson reanimate our horror host Count Gregore at least one more time.
If you are an undying fan of all things horror and a fan of Count Gregore, then let KSBI know that you want to see him return to being the ghoulish grandpa of Saturday night local television. Let them know that you will be watching this Saturday, October 29th at 11 p.m. on KSBI and any other time they bring Count Gregore back to our sets. This legend, like the vampires it draws inspiration from, is meant to be immortal. It will take more than stakes, silver bullets or an ever-changing media culture to kill the Count.