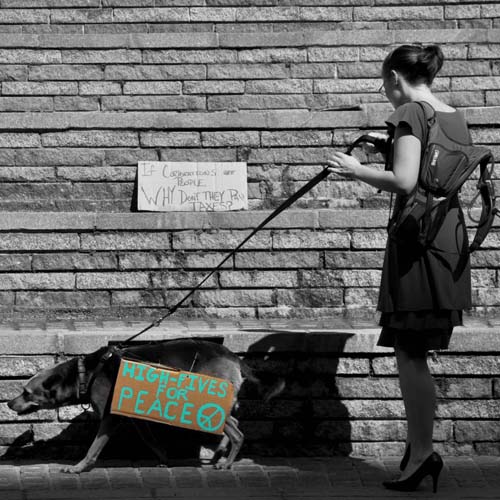 The occupation of Kerr Park in downtown Oklahoma City began in earnest on Monday night. About 100 to 120 protesters gathered to show solidarity with the ongoing Occupy Wall Street protest in lower Manhattan.

The movement, inspired by the â€œArab Springâ€ protests across North Africa and the European anti-austerity protests earlier this year, is a leaderless amalgam of different people and agendas, unified by a left wing populist sentiment and fueled by economic inequality. The slogan of the movement- â€œwe are the 99%â€- refers indirectly to the 1% of the US population that controls nearly half of the nation’s wealth. Protesters have vowed to occupy public spaces within the financial districts of cities across the nation for â€œweeks or monthsâ€. 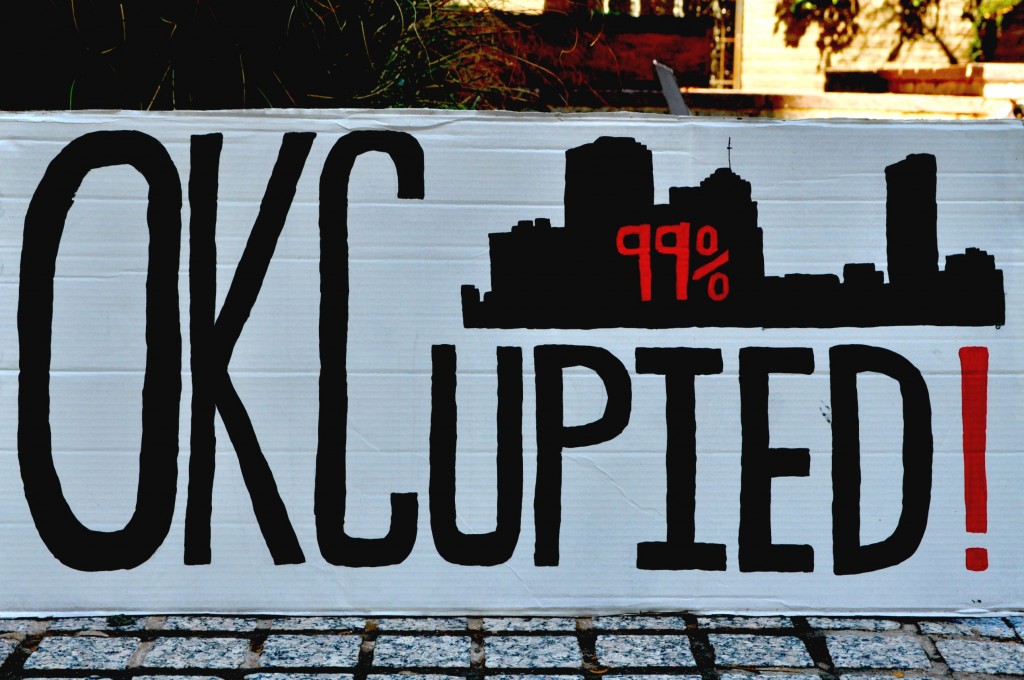 The OKC movement started on Facebook several weeks ago, drawing hundreds to their first two general assemblies at Will Rogers Park. The location was moved to Kerr Park near the Sandridge Campus downtown earlier this week. Kerr Park was chosen for it’s central location and proximity to banking institutions. The location is rife with symbolism. A bust of Robert S. Kerr overlooks the park. Kerr, the Ada born oilman and US Senator, was one of the key forces behind the New Deal programs of President Franklin Roosevelt and later the Great Society programs of Lyndon Johnson. The ongoing dismantling of these landmark social programs is one of the chief complaints of the protesters. 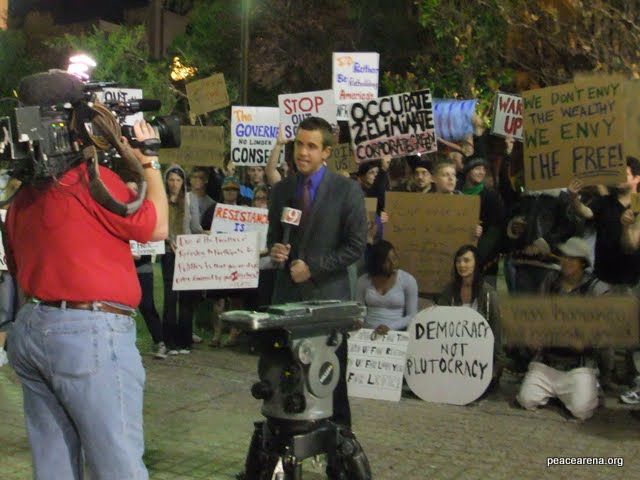 The demographic of the crowd that turned out for the first night was mostly young and mostly white, although all ages and ethnicities were represented. The Occupy OKC Official Facebook page is a chaotic, spirited, sometimes less than polite forum, rife with petty conflicts and passions. (“It’s a facebook page, so take that for what it is” said moderator Heidi Newell) The actual protest is comparatively low key. The scene was reminiscent of the south lawn at OU in late September; the general tone was far more â€œSaturday in the Parkâ€ than â€œAnarchy in the UKâ€. Protesters sat on the Kerr Park amphitheater steps strumming guitars and banjos, chatting, and generally keeping each other company. 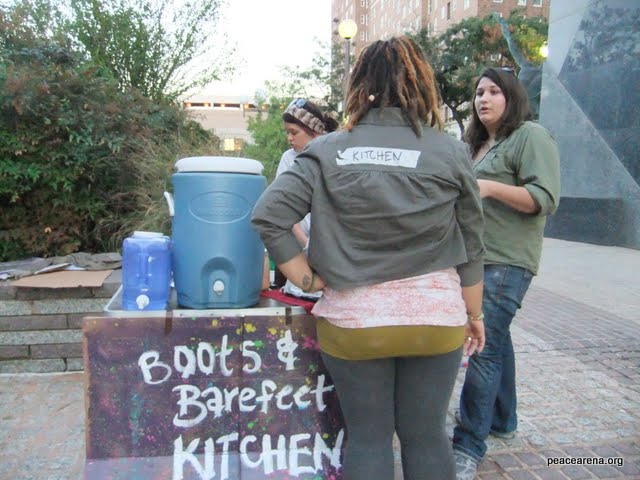 A common criticism of the Occupy Wall Street protest and it’s offshoots is a lack of direction and organization, but the first day of the occupation at Kerr Park seemed remarkably well put together. Protesters split into working groups to make signs, discuss media strategy, and prepare food, while others collected donations and met with reporters. After dark, protesters set up tents and sleeping bags, giving the park the look of a mid century modern summer camp. 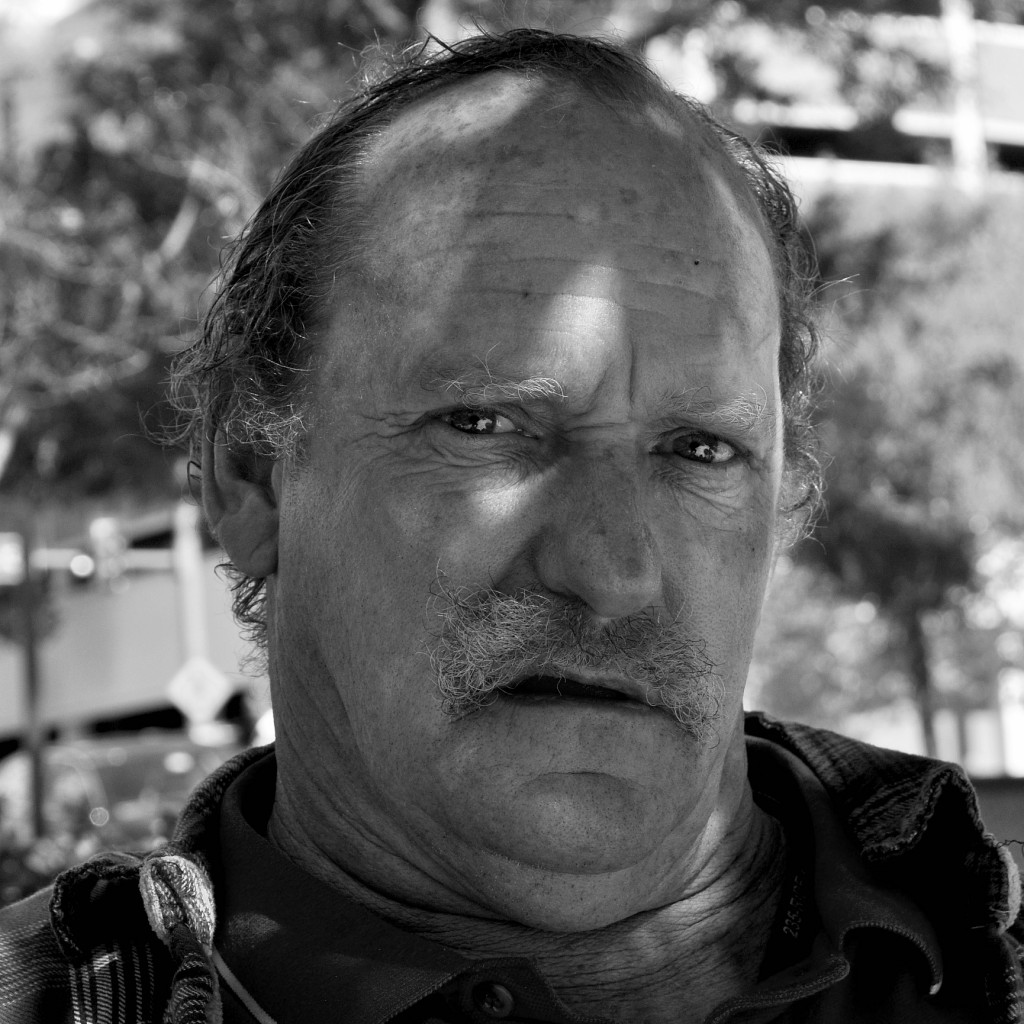 A helicopter pilot during the Vietnam War, Robert faithfully served his country for over 30 years, but now that he's disabled, he's having trouble making ends meet because his monthly medications are not covered by his VA benefits. - Photo by Lynne Rostochil

These protests have the sense of an answer in search of a question. Large scale solidarity marches are planned around the world on Saturday, and the main protest in NYC has fended off an attempt to clear them, for now. Commentators and politicians on the left and right have transitioned from befuddlement and scorn to boosterism and apoplectic rhetoric, respectively. To Herman Cain, the protests are â€œunamericanâ€, to Paul Krugman they are a welcome antidepressant, to Thomas Friedmann they are more luminous than an Applebees sign in Bangalore. My personal sense is that none of the people camping in business districts around the country much care about what you or I think of them. These are people who feel shut out of the American Dream, and they are pissed about it. 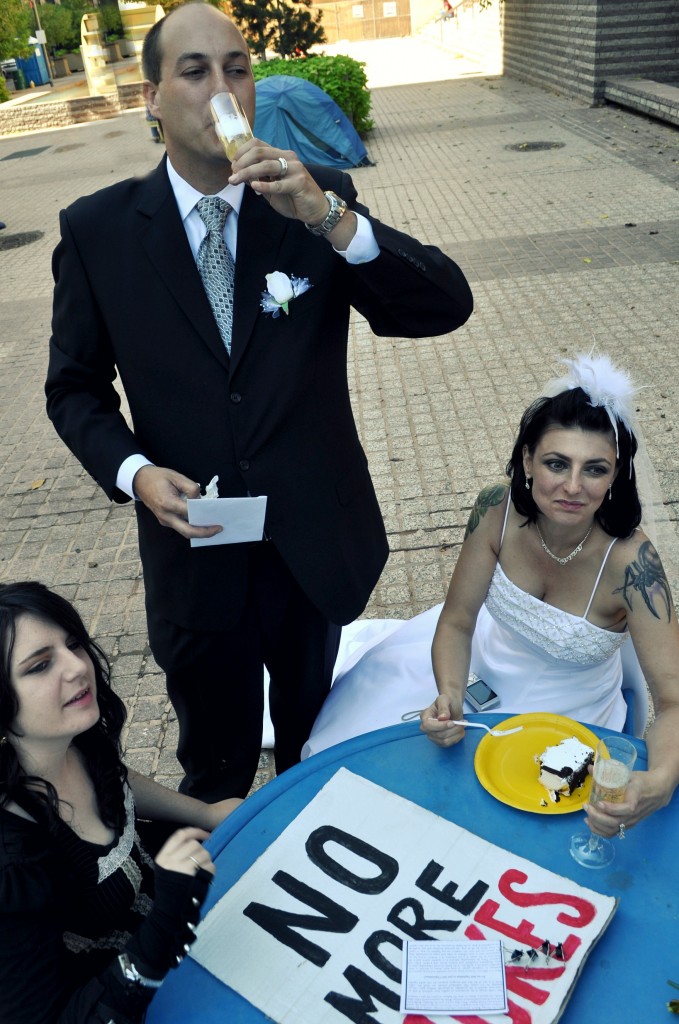 At press time, the protesters were marching on the Chase building downtown. They say they have no intention of leaving downtown any time soon.

As the movement spreads across the nation from Wall Street to Seattle and back, the question remains what impact these protests will have in the long term. The protesters have the advantage of novelty; in contrast to more traditional rallies and marches, the occupations last through multiple news cycles, making media blackout impossible. They lack a single leader to bargain with or intimidate, and no one faction can credibly claim leadership over any other. As Tim Reyner of the UK based Open Society group Coalition of the Willing wrote on his blog, â€œOccupyWallStreet is a new kind of political movement. The fact that the protesters have not leveled any political demands is significant. They are allowing the 99% to define the movement in their own way, creating a clamor of grievances that works surprisingly well to consolidate actions. In fact, the protesters are refusing to engage in traditional political action per se. They have no desire to follow the Tea Partyâ€™s lead, starting with mass rallies and using them to enlist representatives to sign petitions, spearhead door knocking campaigns, put pressure on elected officials, and so on.Â Matt Stoller rightly describes Occupy Wall Street as â€˜anti-politicalâ€™. To be precise: the movementÂ is political, but this is a different kind of politics, which seeks to circumnavigate the tactics and fora of established political action.â€ 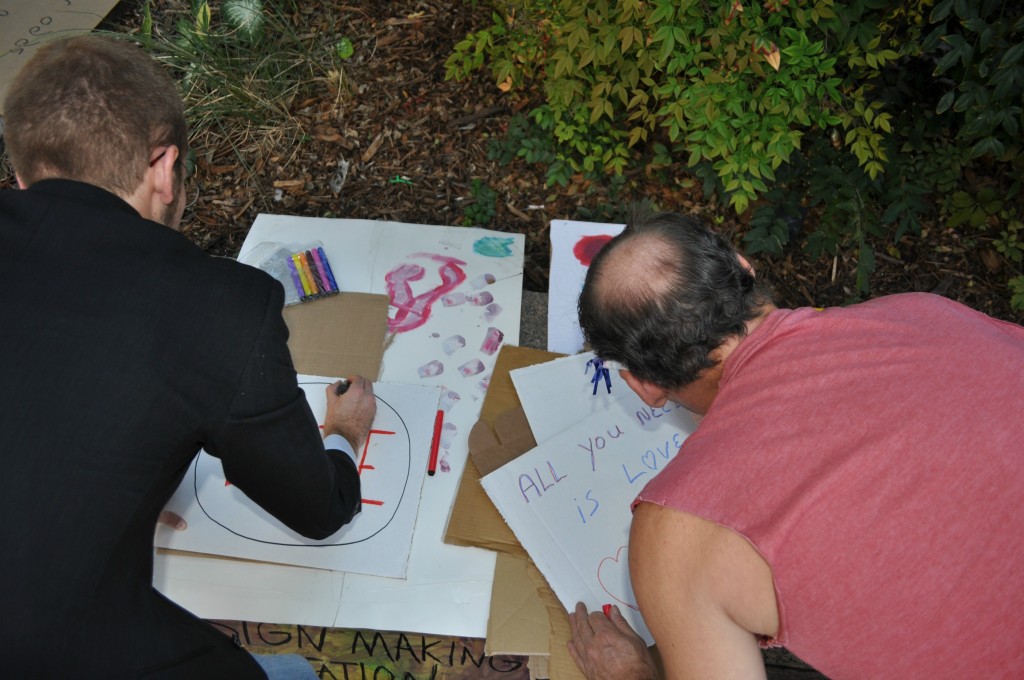 This is a sign- Kerr Park- Photo by Lynne Rostochil

The protesters are very aware that these very advantages could in time lead to their marginalization or co-option by better funded and organized groups. Slovenian philosopher and scholar Slavoj Zizek addressed this concern in his speech to the protesters in Manhattan. â€œThere is a danger. Donâ€™t fall in love with yourselves. We have a nice time here. But remember, carnivals come cheap. What matters is the day after, when we will have to return to normal lives. Will there be any changes then? I donâ€™t want you to remember these days, you know, like ‘Oh. we were young and it was beautiful.’ Remember that our basic message is ‘We are allowed to think about alternatives.’ If the rule is broken, we do not live in the best possible world. But there is a long road ahead. There are truly difficult questions that confront us. We know what we do not want. But what do we want?â€