When one thinks about tuberculosis, it’s tempting to think of pale Victorian ladies, delicately coughing into blood-dappled handkerchiefs.Â  It is also wrong. TB still exists, and still kills- even in Oklahoma City.

Tuberculosis (TB) is a serious health risk throughout the rest of the world. According to the World Health Organization, one third of the worldâ€™s population is currently carrying the bacterium that causes TB. It is the #7 most common cause of death in poor countries, and #8 worldwide. In Oklahoma, TB kills about one or two people each year.

Though most TB in Oklahoma is curable with antibiotics, the bacteria still cause a nasty, long-lasting, life-altering infection. When the bacteria begin multiplying, they eat away at the lung tissue creating holes and scarring. Symptoms include coughing, fever, fatigue, weight loss and chest pain. Since TB is a versatile little bugger, the bacteria can also spread to a personâ€™s bones, joints and eyes, and cause lesions in the intestines and skin. In children it will often penetrate into the spinal fluid and cause meningitis. Kids who survive TB infections often have lifelong complications.

Tuberculosis is â€œsocial disease,â€ meaning that you can only get it if you are in close contact with an infected person. Exposures usually occur in the home, workplace or during a recreational activity. The bacteria are spread through tiny droplets which are launched into the air from the lungs when an infected person coughs or sneezes. You canâ€™t get TB from a handshake or a kiss, but only by repeatedly breathing the same air as a person with TB. The United States has low rates, partly as a result of our generally high standard of living, and the American tendency to spread out and have your own house. TB rates are also kept low by an aggressive public health campaign carried out by state and county health departments nationwide. TB infections have fallen in recent years, and a large percentage of infected individuals are foreign-born citizens who were exposed in their home countries. About 30-40% of the TB cases in Oklahoma are in foreign-born people.

Another big risk factor for TB in Oklahoma is illegal drug and alcohol use. â€œHere in Oklahoma, the most common denominator is drug abuse,â€ says Dr. Gene Claflin, a TB doctor at the Oklahoma City County Health Department (OCCHD). People with severe addiction issues often have poor medical care and suppressed immune systems. Infection with HIV as a result of IV drug use will also speed up the disease. Drug use often occurs in groups, and so infections can be quickly passed between users. In the past few years, two different clusters of TB infection have been linked to a group of people getting together to smoke pot in a garage. With all the coughing that is likely going on, hotboxing in a garage is an excellent way to pass around TB.

â€œI guess you would include those guys in the garage as â€˜recreation,â€™â€ Dr. Claflin observed wryly.

Several neighborhood bars have also been at the center of a cluster of TB cases over the years. Dr. Claflin treated several patrons of an unnamed bar in Oklahoma City where a man with an advanced case of TB passed away while sleeping on the pool table one night. Several of his fellow barflies subsequently tested positive for the disease. 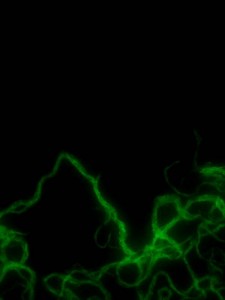 Fibrils of tuberculosis bacteria under a fluorescent microscope.

One tricky thing about TB is that there are no symptoms when a person is first infected. The bacteria can hide out in the lungs for years, evading the bodyâ€™s immune system by going into a dormant state called a â€œlatent infection.â€ At this stage, the person will test positive for TB if he is given a skin test or a blood test but is not contagious.

Infections become active when the personâ€™s immune system is stressed, and often occurs within the first two years post-infection. People who have HIV, or whose immune system is being suppressed for medical conditions such as psoriasis, rheumatoid arthritis or an organ transplant, are especially vulnerable to TB.

The odds that an infected person will never develop a full blown infection are actually pretty good. Only about 10-15% of latent infections ever become active â€“ but itâ€™s still a crap shoot. And when left untreated, TB is fatal. Deaths from TB usually occur in rural areas when the infected person fails to seek treatment.

Typical Chest X-Ray with TB Disease (from Core Curriculum on Tuberculosis - What the Clinician Should Know. 4th ed. 2000. Division of Tuberculosis Elimination, US Centers for Disease Control and Prevention (CDC)

The good news is that the vast majority of TB cases in Oklahoma are completely curable. Anyone who tests positive for a latent infection is provided with preventative antibiotic treatment and is strongly encouraged to take it. The state and county cannot force an adult to take preventative therapy, but they can charge parents with neglect if they do not treat their infected children. Preventative treatment usually consists of two different drugs taken for four months, and will clear the hibernating TB bacteria from the body.

Once a person enters the active stage of a TB infection, treatment generally consists of four different drugs taken for up to nine months. Though the drugs are provided free of charge to the patients, many people get tired of taking so many pills for so long and stop taking the medication once they feel better. When patients stop taking their drugs before the bacteria are eradicated, the remaining TB cells can develop resistance to the drugs so that they no longer work.

Antibiotic resistant TB is a huge public health concern that threatens to drag us back into the pre-antibiotic days. Strains of multi-drug-resistant TB (abbreviated as mdrTB) are immune to the most effective â€œfirst lineâ€ TB drugs, so mdrTB patients must use â€œsecond lineâ€ drugs that are more expensive, may be less effective, and can have greater side effects. These strains are especially common in China and in parts of the former Soviet Union. Some strains of TB, classified as extensively-drug-resistant TB (xdrTB) are now resistant to even the second line drugs. People infected with these strains have a 50/50 chance of surviving their infection.

Fortunately, most of the TB in Oklahoma is referred to as â€œgarden variety TB,â€ meaning that the strains of TB are susceptible to the antibiotics commonly used to treat it. â€œIn the last 16 or 17 years weâ€™ve had two cases of mdrTBâ€ in Oklahoma City County, says Dr. Claflin. Each case cost more than $250,000 to treat, when the costs for personnel, drugs, and lab tests were added up.

To prevent antibiotic resistance from spreading in Oklahoma, the state and county health departments have ways of making you take your drugs. They use a technique that is unique to TB, called â€œdirect observation therapyâ€ or DOT. When a patient is under DOT, a nurse visits the patientâ€™s home and watches him take his drugs. This happens every single day until the patient is cured.

What happens when patients refuses their drugs? The health department can get a court order that requires patients to take the drugs or they end up in jail. The Oklahoma County jail has specially-built isolation cells that can hold people with contagious respiratory diseases. Claflin says that during his fifteen years at OCCHD, heâ€™s seen three or four resistant patients who ended up in jail, but usually DOT is enough to encourage compliance.

For TB patients who have no home for a DOT nurse to visit, OCCHD provides room and board for the patients until they are no longer contagious. Dr. Claflin confirmed the rumor that there is a secret TB hotel in the city. The identity is kept secret so that the arrangement does not hurt their non-TB-carrying business. Housing the patients at the hotel allows OCCHD to monitor treatment of homeless people who might otherwise be hard to track down, and removes people from group living situations, such as nursing homes. Patients often stay at the hotel for several months until they are deemed to be no longer contagious.

Dr. Claflin reassured me that should you ever find yourself or your family checked into a hotel with a significant number of coughing residents, each hotel room has its own air flow to prevent germs from spreading between rooms. OCCHD also supplies the patients with three meals a day, so you shouldnâ€™t find a TB patient sneezing on the breakfast bar in the lobby.

So why does TB treatment fall under the jurisdiction of state and county health departments, while other diseases are left to hospitals and private health insurance? The resources that OCCHD puts toward TB treatment and prevention may seem extravagant, but DOT is standard treatment in the United States, and is responsible for our low TB rates compared to other countries. Dr. Claflin explains that â€œTB has defaulted to the health department,â€ because the marginal populations who are most at risk for TB often do not have adequate medical care. Also, most clinics and hospitals do not have the equipment and procedures in place to isolate contagious patients and protect their staff from the bacteria. Without state or county intervention, severely ill and extremely contagious TB patients would end up at emergency rooms, exposing large numbers of people.

The state and county health departments also have the resources to conduct contact investigations of people associated with TB patients. The contacts are tested for latent TB and if they test is positive, they are given preventative therapy. These investigations reduce the number of active, contagious TB cases. Dr. Claflin recalls one investigation that had over 1500 contacts stemming from a single TB patient who frequented a bingo parlor. An average investigation has only 5-15 contacts.

Claflin claims that we could eradicate TB in Oklahoma County if everyone was tested, and if people with latent infections were forced to take preventative drugs. However, OCCHD does not have the resources or power to do that.

Personally, Iâ€™m relieved that the state and county health departments spend so much time and money on treating TB. Seaside sanitariums are a thing of the past, and waiting out your TB treatment in a secret hotel doesnâ€™t sound like much fun. Also, I prefer to keep my lung tissue intact, and my handkerchiefs unbloodied. Thanks to the efforts of public health departments that have kept TB rates low in the US, I can almost hold on to my romantic notions of Victorian â€œconsumption.â€ Plus, if one of my pot-smoking friends develops a suspicious cough, I now know where I can get tested.