An aspiring writer named Cheryl Strayed (Reese Witherspoon) experiences the death of her beloved mother at age 22 in this adaptation of the real Cherylâ€™s story, Wild, in theaters today. Strayed runs from the room and yells at faceless doctors, â€œThey said it would be a year; itâ€™s been a month.â€ Walking home in Minneapolis she passes an Irish pub where huddles of men in green sip stout slowly and check her out. She curses St. Patrick and bundles into a white scarf. Where does one go after leaving the hospital on such a night? What is the appropriate environment? One day Cheryl spots a travel guide for the lonely Pacific Crest Trail, and the image becomes a fixed idea in her mind.

Later on, and in the true test scenes of Witherspoonâ€™s fitness for the role, Strayed acts out, cheating on her boyfriend with multiple partners, and vacantly reveling in it, in alley ways, in heroin dins. Sheâ€™s appointed a â€œten dollars an hourâ€ therapist not a $50 one. He asks her if she still sleeps with her husband, she says no I like to keep it detached. He asks her if she thinks all the other men are as detached as she. Cheryl sees sheâ€™s on the defensive and decides the therapy wonâ€™t work. Cheryl returns to the image of the trail and in a motel room arranges a back pack that makes her tip over. She begins to walk, suffer, and heal. As Strayed walks the walk (we see males fall of the trail), Â Witherspoon proves more than fit for the gritty role. She will also be at (Sweet) home with another Oscar nomination.

Jean Marc Vallee is a French (Canadian) director with a movie about Queen Victoria to his credit. With Dallas Buyers Club and now Wild, he has intelligently combed the American lower class ($10/1 hr therapy) for a unique person who struggles greatly with their surroundings, and emerges from them with that Emersonian crystal, experience. Famous French filmmakers of note have made breakthroughs in cinematic style and form, they talk of love, they argue about being or destroy the author, they typically appreciate art better and hold their relationship with American film at an engaged, but grudging, distance. They like black and white Hollywood gangsters, Scorsese, or Jim Jarmusch.

But Vallee, from an outsiderâ€™s tilt, is interested in making American films about today, in that they are chiefly and muscularly about the spirit of man (like Emerson, Malick and Whitman) and about survival (like Jack London or the Donner Party). He seems pleasantly unaware of the Horatio Alger (or Mark Zuckerberg) myth, and more interested in finding music through the realization that most American life is rough on the body and soul. In Ron Woodruffâ€™s struggle to live with AIDS for 7 more years, instead of the diagnosed 60 days, he stumbles out of the Rodeo rings, cusses out doctors and finds a new drug in Mexico that will help others. In Cheryl Strayedâ€™s dealing with past loss andÂ lingeringÂ transgressions–right as sheâ€™s losing toenails and duct taping herself new sandle-shoes– a healing process begins for the millions of readers who fell for the original memoir.

Vallee has a feel for American strangers, too. And one will always encounter them in a road trip, or foot trip, movie. The extras and bit roles are well-casted folk, some with an ominous feral presence (two hunting buds with no water and an empty beer can who stumble upon a lone woman), a junkie with killer shoes and dance, others with a weird, practical exuberance about them (a desert lawn mower who enjoys liquorice). The protagonist has a memory-speak of witticisms, images of mom (Laura Dern), and quotes from authors, while the strangers speak in popular songs, as when a surprisingly moving moment happens to the tune of Red River Valley, further entrenching Vallee into faithful Americana. 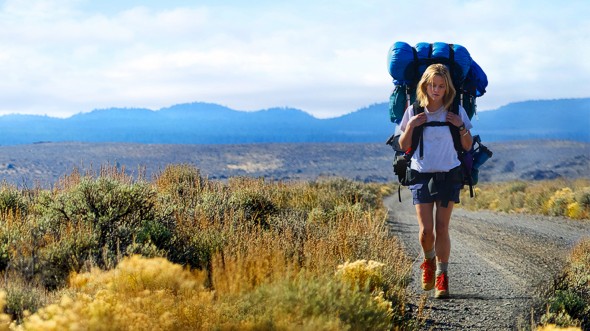 I liked this movie better than 127 Hours and Into the Wild (dudes in the wilderness), and Dallas Buyerâ€™s Club also. It has the ranges of the West on its side and a challenge to cheat on a boyfriend-wearing-a-Nirvana-shirt answered by its Legally Blonde star (Witherspoon who also co-produced one of the yearâ€™s best, Gone Girl). She carries the movie, truly, and with stubbornness and rugged beauty.Â  At one point the secular Cheryl says a prayer ‘to the universe’ about her mom. In a narrative like this, the prayer is a gesture of perseverance through isolation, and more a pearlyÂ stone in the overall tapestry of the unlucky traveler’s journey.

Vallee (and screenwriter Nick Hornby) navigate the contours, or seem to, of the female experience into the classically male tale. When Cheryl abuses her sexuality to mask the pain, the director uses more blender-y montage rhythms. When men may be trying to help on the road, we can feel the potential danger with a still camera. The film settles into a flow after contrition through the desert, snow, and mountains. Cheryl changes out of her hiking gear in Oregon and runs into a boy at a Jerry Garcia memorial concert. She exercises her right to pleasure when it feels right in the narrative (yup, just as Jerryâ€™s spirit has flown), and this little Grateful Dead tribute show takes on a fleeting innocent reverence that evokes an unexpected road trip high of the kind almost impossible to capture on film.

An innocence or renewal in travel is also laced through the Simon and Garfunkel song (El Condor Pasa) that bookends the movie. Yet Cherylâ€™s journey is painted pretty unsentimentally. To speak with sentiment, but in appreciation of this story, the natural gifts of the country may heal us yet, when we find them.