S&B’s Burger Joint wants to give something back to you. 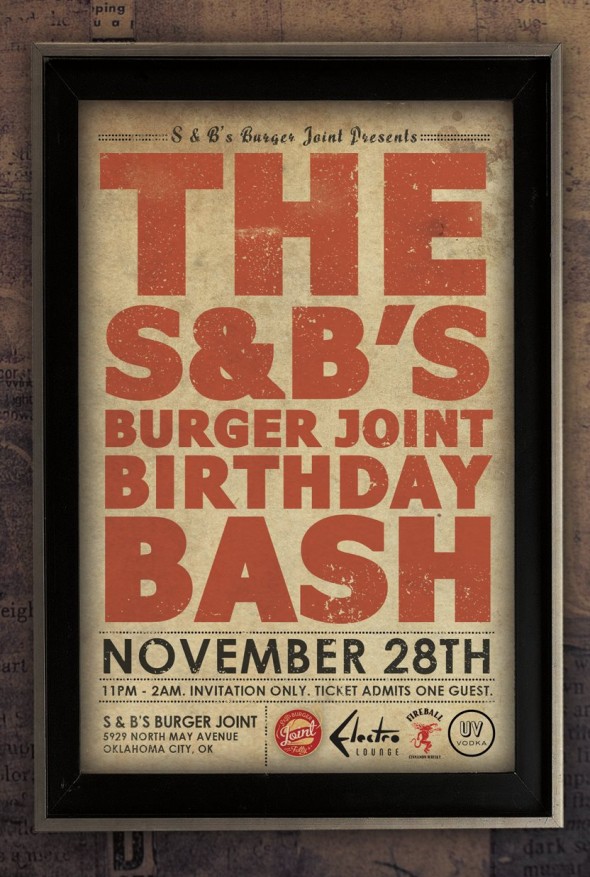 Unless you’ve been living under a rock for a few years, you should know about S&B’s Burger Joint. Yes, not only did they take the number one spot for “Best Hamburger” in the Gazette’s Best of OKC readers’ poll this year, but they did so for the second year in a row. Yes, they have the most original and inventive gourmet burger menus in Oklahoma. Yes, they have been around for five years, and have been celebrating their anniversary with special menu offerings at their original location this month. But, to me, this is not why you should know them.

I’m sorry. I have to give a brief history lesson to all of you that are not like me –that is to say, those not 30-ish and above with an active -or, previously active- nightlife.

Located in the bottom floor of the office building in the Best Buy parking lot at NW 59th and May Ave. in OKC,the Electro Lounge was the brainchild and baby of owner/operator Bryan Neel. For over a decade, Neel cultivated an environment based on his penchant for ’80s and ’90s music culture. The climate of the Electro was one that supported local and touring DJs and bands alike. On top of that, it supported the drinking habits of many a hipster. There was always good beer, and Bryan had a predilection for cocktails. In fact, his affinity for Bloody Marys is a legacy that’s carried over to S&B’s current menu. Basically, the Electro Lounge was the little hipster-dive-that-could.

But then one day it wasn’t there.

Then, one day, on a whim, you go to a night club that you like, and used to frequent a lot more, but that night club was not there anymore. Now, there was a burger place.

Okay, it didn’t happen in just one day.

I could give you some long-winded story about the transition from Electro Lounge to S&B’s Burger Joint. About how Bryan teamed up with longtime bestie, Shannon Roper, who had been perfecting burger recipes on his own time. About how they decided that they should try selling the burgers in the day because the Electro was only open at night. I could tell you about how, gradually, S&B’s took over the Electro… and how that makes senseâ€¦ to the mindsetâ€¦ of an aging hipsterâ€¦

Let’s just say Bryan teamed up with Shannon to start a burger empire, and it’s going well so far.

However, they’re turning five and they’re not forgetting their roots! 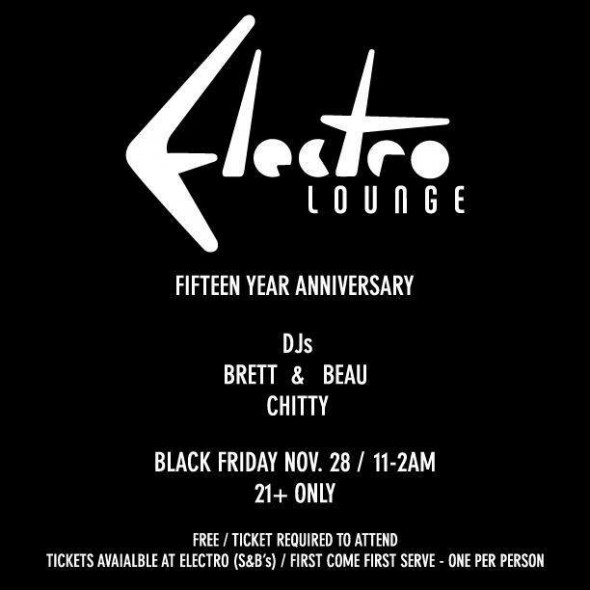 This Friday, the 28th –yes, Black Friday– when the original S&B’s location closes its doors, it will reopen them a short while later as the Electro Lounge.

Sponsored by Fireball and UV Vodka, the event takes place from 11pm-2am, is 21+ to enter, and will feature guest appearances by old-school Electro Lounge DJs including Chitty Chitty Bang Bang, Brett & Beau, and, rumor has it, Bryan Neel himself.

Now, when I inquired about this soirÃ©e, S&B’s management stressed to me that this is an exclusive event. Like, you-have-to-have-a-ticket-to-it exclusive. They couldn’t stress it enough, it seemed. Which is odd, when you consider how inclusive it all is. All you have to do to get a ticket is go to your nearest S&B’s, and they’ll give you tickets free of charge. Or you can friend them on Facebook. Hmâ€¦ go figure.

Yes, for the first time in five years, you will be able to accurately say, “I’m going to the Electro!”