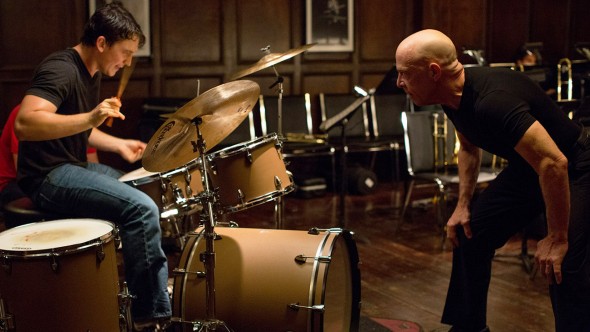 Damien Chazelleâ€™s Whiplash is a very good film that takes on a tired template, the stand-off between the ambitious but vulnerable student and the tyrannical teacher. Chazelle refreshes the story by turning it into a kind of horror movie,Â psychologically tense and with the requisiteÂ shedding of blood that keeps moviegoers interested.

Here that story is set at the prestigious SchaefferÂ Â Music Academy, a moody citadel thatâ€™s as isolated from the instant gratification culture as the Bermuda Triangle. These students are expected to read lots of music and practice, practice, practice. And its focus eventually cuts out every musician except two keyed up human souls, one who has seen greatness and is haunted by it, and the other who has seen mediocrity and is haunted by that, and has staked a fierce claim forÂ excellence at school.

Whiplash has received accolades across the board, at Sundance and with critics. Its chief critic, Richard Brody, a jazz nut at The New Yorker, says it has no music in its soul. But this movie is all about souls, just as itâ€™s a movie thatâ€™s not about jazz, but one that needs an arena in whichÂ to film a great duel. It choosesÂ a demanding music school that happens to teach jazz. The student and teacher fall into an insane contest with each other, and when it is filmed withÂ such tight discipline, edits duly punctuated by sax and clarinet horns,Â Â long shotsÂ attacked byÂ jagged sweat cymbal editsÂ for the virtuoso drumwork, we get to see what happens to the soul during the awful pursuit of greatness, a life changing test of endurance. Ask Michael Jordan battling the NBA Finals with the flu. He doesnâ€™t even know heâ€™s sick because he hasÂ entered a new spiritual dimension of endurance and body leaving.

There are people left behind on this path. Whiplash opens with Andrew Neyman (Miles Teller) enjoying an old movie with his dad Jim (Paul Reiser), a failed writer turned schoolteacher. Andrew spills the raisinets into the popcorn bag theyâ€™re sharing. He tells dad he doesnâ€™t eat the candy, but around it. He also catches a glimpse of a college aged girl working the concession stand. Both people will lose his interest.

Soon heâ€™s back in a tight room with pictures of great jazz drummers on the wall. Buddy Rich and Charlie Parker are discussed and lionized throughout the film. The boy sits on the floorÂ with an out of date CD stereo and the Rich disc. Heâ€™s more tender with it than anything else. It strikes us as funny Â that a 19-year-old is so taken with becoming a drummer in a style so out of date.

In the rookies room he catches the eye of studio band instructor Terence Fletcher (J.K. Simmons in a career role). He pulls Andrew up the ranks. With this confidence instilled Â he goes to ask the concession stand girl out, all in a one-take, master shot. She says yes. They have a date where he finds out sheâ€™s not as driven as he is.

At the first day of studio band Fletcher verbally abuses an overweightÂ horn player and dismisses him. He asks Andrew to pick up his tempo. Itâ€™s a simple and demanding task for Andrew (Miles Teller is a marvelous and compelling actor with a scar on his chin; he has played drums, as a teen forÂ a Butt Rock band in Florida; for Whiplash he learned swing-jazz style). Andrew tries to pick up the pace. Fletcher hurls a chair at him. He slaps him into reading time signatures aloud.

Fletcher is the Full Metal Jacket Drill Sargent of Charlie Parker-obsessed jazz teachers. But theÂ fedora hattedÂ Simmons can subdue his personality in a snap to medium cool and float along with real world people politely, moments after wreaking havoc–a testament to theÂ serious acting muscle Simmons has hidden from us.Â Fletcher isÂ a stranger villain thanÂ R. Lee ErmyÂ could be.

Andrew practices alone more. When heâ€™s recruited to actually compete, a shock-twist happens that hurls the movie into an expressionism, a reality ultra heightened. The random events that cause the intensity, flat tires, stolen notebooks, are random but service to heighten the drama and make this a movie, not a documentary, a document that’s first and foremost an emotion. Andrew drums deep cuts into his hands. Does every drummer bleed so much on themselves and the drum kit skins? I doubt it. But in order for the Ubermench vibe to take shape the volume has to rise. 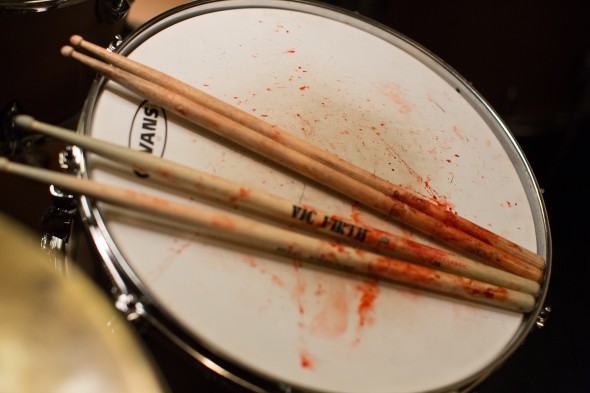 Whiplash culminates in a scene of battle between the two warriors that casts a spell. Such exacting standards destroyed David Helfgott (Geoffery Rush) in Shine. But in the Post-Empire America for a young man vying passionately for the 1 percent of global competitors, then the acting (Teller) and theÂ performance (Andrew) are made of more frightening confidence and steely soul. Eighty-percent of Harvard’s students are depressed. They slave to get there and find it still hasn’t guaranteed a path. If they wereÂ obsessed with Buddy Rich (or Facebook), or had to deal withÂ a Terence Fletcher they might not have time to be depressed.

Back to the critique that the film is about music but with no music in its soul. Â Itâ€™s a point that deserves to be argued with because it’s not all wrong.Â Â This film shows, with one moving-in-slow shotÂ of the concerned father, that Andrew isnâ€™t experiencing a moment of poetic grace or expression. He is descending into madness. If he was a literary man heâ€™d be writing Infinite Jest, not Moby Dick. Thereâ€™s also the vibe of the Schaeffer music school that intrigues you. The isolated practice rooms shot from a narrowÂ hall’sÂ distance. Andrewâ€™s entire existence is painted as lonely. The green-lamped library andÂ  spare contest stage (audience hidden) – all are competitive zones of limited personality. The set, lighting, and costume design are as sharply clean, private, and strange as Ayn Randâ€™s living room.

But I think what the filmmakers understand is that neither Andrew Neyman nor Terence Fletcher are preternaturally gifted. They canâ€™t take to the intoxicated unknown. This touching (and unifying)Â truth floats down to surface as they meet at a Brooklyn jazz club in the third act. Fletcher is sitting in on piano (not being insane). He tells Andrew that the worst 2 words a teacher can tell a student is â€œgood job.â€ He criticizes Starbucks jazz compilations, and a new American scene that gives everyone an A. Heâ€™s right. The standards are falling. Sustained concentration is impossible. Jazz (and literature) are an anachronism. Fletcher needs his militaristic relationship to the music because itâ€™s dying, AND because it doesnâ€™t float as freely from his inner core.

He keeps telling the Charlie Parker story because heâ€™s not Charlie Parker. Is the story about Parker true? The biographers say Jo Jones merely dropped the cymbal and everyone jumped and laughed, drunk. And Charlie Parker didnâ€™t go run offÂ and behaveÂ like Miles Teller. It doesnâ€™t matter. What matters is this teacher, a great character for film, believes itâ€™s true. That little story has given him a skeleton for surviving, a code of living that has sustained him. In a quick look Teller revealsÂ aÂ lovely admiration for that, fromÂ the man who put him through hell. The two men who want to see that bright light more than anyone else in the bar.

Whatâ€™s more, Chazelle has told the tale rather objectively. Anyone can get something different out of Whiplash. I believeÂ there’s a critique of our times here.Â He knows New York isnâ€™t full of drunken jazz greats, Jackson Pollock, James Agee and Norman Mailer,Â Bob Dylan and Lou Reed, Ginsberg and beatific Trotskyites; not even The Ramones remain. What has replacedÂ them in the world of WhiplashÂ are maddeningly pious teachers who have the cultural knowledge and distribute itÂ only to the children who can afford to learn. This truth is all over Jim Neyman’s dinner table andÂ Schaeffer Academy, and itâ€™s what makes Tellerâ€™s performance so lonely and interesting.Â Brave and sad is the boy who hasn’t yet realized that the gatekeepers are fullÂ of shit–Â when he creates anyway,Â with a fury thatÂ burns to know itself. 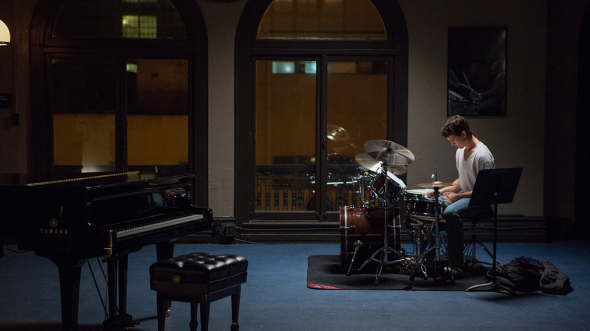 Thereâ€™s still the artist in him that hisÂ father recognizes as different from his own sensibility. The kid who fights his jock family at the dinner table andÂ dumps raisinets into his popcorn is indeed one of the weirdos. After his dark night of the soul, his globally competitive drummer boy brainwashing, thereâ€™s no telling what heâ€™ll do next. He’s only 19.Â It doesnâ€™t seem impossible that Andrew would let his freak flag fly later and discover someÂ  Bitches Brew.

The heart of art rests on such hopes.