Danny was on point writing about the Kardashians this week. He warned me that sis Kim was going to blow up the Internet.

And that she has.

Oh, wow. There is so much to talk about concerning this issue. Worried it could come up with your kids at any time? Not sure how you’ll address questions? Maybe you feel like you need to talk to your kids about this to make sure they understand the “ways of the world,” the “Interwebz,” and today’s “journalistic standards.”

Well, fortunately, the guys who put together Heck Bender have just the video for you!

The Grigo also states that Mrs. Kardashian-West doesn’t get that she is playing into an old, racist joke. For those of you who care about this kind of pop culture commentary.

“At best, these pictures are recycled art, and at worst, they are lazy sensationalism â€”Â but innovative they are not…

…So last night while everyone else was arguing over Kimâ€™s Kâ€™s right to show her butt, my focus was on something else entirely. When I looked at the spread all I saw was a not so subtle reincarnation of Saartjie Baartman â€“ imagery that is steeped in centuries of racism, oppression and misogyny. For those who donâ€™t know who she is, hereâ€™s an excerpt from Wikipedia:

Sarah â€œSaartjieâ€ Baartman (before 1790 â€“ 29 December 1815 (also spelled Bartman, Bartmann, Baartmen) was the most famous of at least two Khoikhoi women who were exhibited as freak show attractions in 19th-century Europe under the name Hottentot Venusâ€”â€Hottentotâ€ as the then-current name for the Khoi people, now considered an offensive term, and â€œVenusâ€ in reference to the Roman goddess of love.

Saartjie was a woman whose large buttocks brought her questionable fame and caused her to spend much of her life being poked and prodded as a sexual object in a freak show.

But something tells me Kim probably has no clue about the cultural and historic significance of what sheâ€™s done. Instead, she probably just thought it would be cool to do an edgy photo shoot with famous photographer. And many of you have fallen for that oversimplified stance as well.”

If you want to, you can read more of the article here. 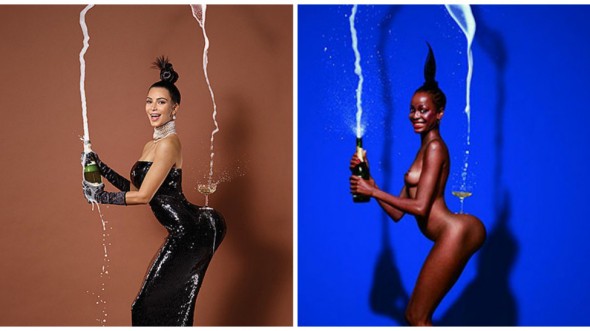 P.S. Remember when Tina Fey had something to say about this, yeah, Time Magazine decided to rehash it for ya.

One comment to “Humor: “How to Talk to Your Kids About Kim Kardashian’s Butt””