Late Friday last week the Oklahoma State Department of Education (SDE) released the results in the first run of high stakes testing for Oklahomaâ€™s third graders. There were a number of headlines, including how many Oklahoman third graders risk being held back (nearly 8,000), how unfair it was for the SDE to release results to the media before schools had a chance to see them or contact parents and let them know if their child had passed, and the inevitable outrage that third graders were being subjected to such high stakes testing at all.

After a weekend of angry phone calls and emails from parents, educators and administrators, it didnâ€™t take long for the Oklahoma Legislature to respond. Monday afternoon, House Bill 2625 passed through the Oklahoma House. House Bill 2625 ensures parents and educators have input in determining whether or not to hold a third grader back. The bill will change the language established by the Reading Sufficiency Act in 2011.

Instead of having the decision made in the Oklahoma legislature through an automatic process, the decision on whether or not a student should advance to fourth grade will be made by a committee of the student’s guardians, the reading teachers, and the school principal. If the committee unanimously agrees, the student will advance to fourth grade and continue to be monitored. If there is not an unanimous agreement, the student will be held back in third grade.

In the House on Monday, the debate on the bill revolved around why so many of Oklahomaâ€™s students are doing poorly. Proponents of the bill argued that students in poorer districts are not failing because of the schools, but because of things like access to food and supportive home life. According to Oklahoma Watch, in opposition to the bill Mike Reynolds said that education in Oklahoma is funded quite well and that more money wonâ€™t help. 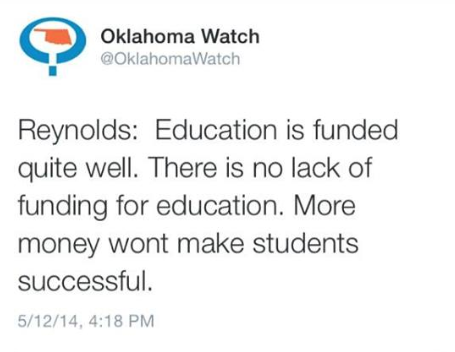 On the flip side The Oklahoma Policy Institute, a non-partisan,statewide think tank based in Tulsa, asserts that Oklahoma doesn’t fund education adequately and is actually #1 in the nation for spending cuts per pupil, #44 in the nation in per-pupil funding, and #49 in the nation for teacher salaries.Â 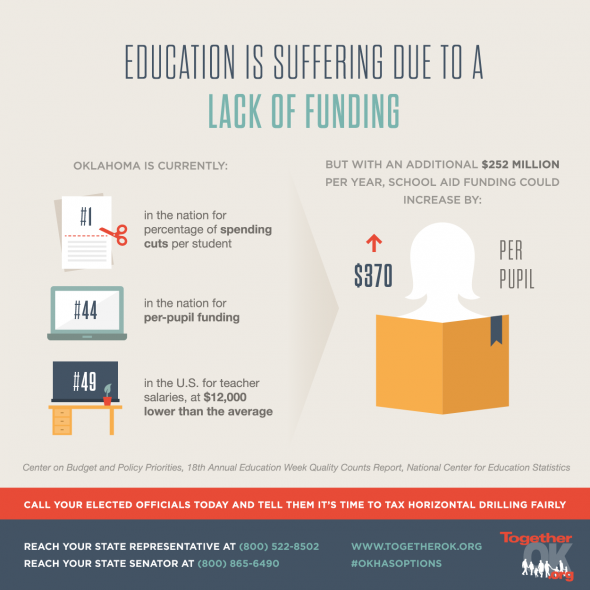 HB 2625, which originated in the Oklahoma House and had already made it through the Senate with amendments, will now go to Governor Mary Fallin. State Superintendent Janet Barresi stated her opposition to the bill, but the vast majority of the Oklahoma Legislature supported it. The only State Senator to vote against it was Clark Jolley of Edmond. Only six members of the House voted no: John Enns, Mike Reynolds, John Trebilcock, Jason Nelson, Mike Ritze and Paul Wesselhoft.

This is one of those cases where a governor has a clear chance to influence the direction Oklahomaâ€™s education system will take. If Mary Fallin decides to go ahead and veto this popular bill, itâ€™ll be a campaign issue for her main opponent in the upcoming gubernatorial race, Democrat Joe Dorman. Dorman, a member of the Oklahoma House, spoke in favor of HB 2625 on Monday, and voted for it.

One of Dormanâ€™s top issues is education, with his campaign website pointing out that Oklahoma ranks 49th in teacher pay and has cut our funds per student by more than any other state, 22.8%.

Until now, the Reading Sufficiency Act has been a bragging point under the Accomplishments section of the governorâ€™s reelection website. How the governor responds to this situation, and whether sheâ€™ll continue to use the RSA on her campaign literature, only time will tell. 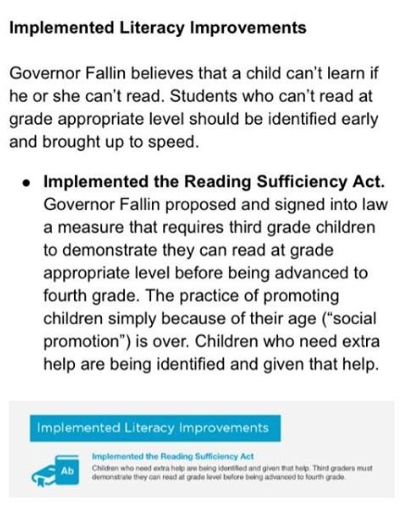 3 comments to “Politics: Education HB 2625 Recap and the Gubernatorial Race”