I heard the track “Eruption” on SoundCloud earlier this year and got hooked on it.  And when I saw Tobacco, a.k.a. Thomas Fec, would be closing out Austin Psych Fest, I knew I would be at that show if for no other reason than to at least hear this song and catch more of his new material live. If you know nothing of Thomas Fec’s side work as Tobacco (he’s also in Black Moth Super Rainbow), you should know that his visuals are intense in weird ways.

It’s worth noting he’s had at least one set shut down by a venue in New York when opening for The Flaming Lips in 2013. Alas, he only had two more songs to play if security would have just let him finish. Honestly, if you ask me who makes better use of controversy these days, I’d say it’s Tobacco. That set on Sunday night in the Levitation Tent was fantastic.

And while I wasn’t enamored of some of the more grotesque clips that played during Tobacco’s set, I never thought it was so terrible I just had to jet. And I found the other parts, strange as they were, worked well with the music.

I did notice some people left during a clip devoted to some serious bros with beards love, think: “Hot Wet American Summer.” These dudes looked like camp counselors. It was kind of cheesy and awkward looking this clip, yet it was all very hypnotic when set to Tobacco’s music. 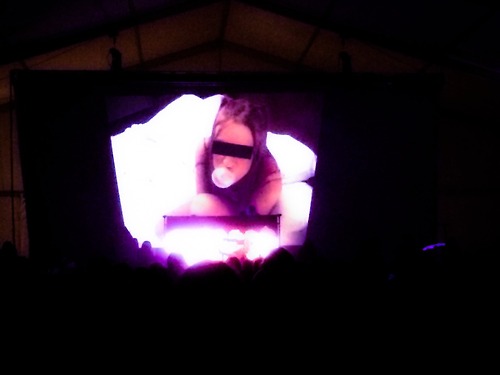 If there was one continuous thought I had throughout the show, I’d say it was grappling with the surprise that he’d found this much video to work with; it just ranged. I mean, it really, really ranged. I’m sure YouTube was instrumental in finding a lot of this obscure material. But at one point you realize there is all this mass media that existed on VHS. It’s just kind of insane.

Curious about those beards, are ya? Below is the YouTube video that came up in the set he played on Sunday, don’t worry, it’s just a bunch of beard on beard action. Clothes stay on and eventually one more joins the party. They’re wearing primary colors. It’s like mixing paint, when you think about it. Bristly, bristly paint.

Anyway, the visuals weren’t the only part as it was the music that got me in the tent in the first place. I enjoyed it.

I was also reminded of a Vice article that profiles some video performance art artists who are reminiscent of “Tim and Eric.” Derek, also along for the ride, even said it reminded him of “Tim and Eric.” So all these things and more swirled inside my head as I listened to his set. In my mind, with all the elements of commercialism and commodities seen within the context of the clips chosen, my thoughts kept looping back to ideas raised in “The Society of the Spectacle.”

I’m not sure if that’s what Thomas Fec means to invoke in “we” the audience, but art is art. So you’re free to interpret his visuals as you like. I definitely get the vibe there is a narrative within their order and they’re designed to flow fluidly into one another, from the creepy sideshow man, who wouldn’t seem out of place in a show like in Twin Peaks (it’s an otherworldly giant thing), all the way into the moment where you’re being introduced to the chamber of horrors. There are even repeating motifs, like in clips where the fourth wall is broken between the audience and the performers that force the viewer into the first person perspective. Such as having a mask or plunger applied to the camera lens, thereby blacking out the frame before another scene is cut to.

If you like Tobacco’s music, and aren’t easily offended by what you see, like you can handle the grotesque as it pops up (and I’m sure everyone has a different trigger), there’s a good chance you’ll enjoy his live shows. So if this is the case, you need to make it a point to see him when he’s passing through, I promise it won’t be like anything else you’re likely to experience this year.

To that end, I also did an interview with Tobacco a.k.a. Thomas Fec in the lead up to Austin Psych Fest. I loved the singles I heard on Spotify. And right now you can stream his whole album “Ultima II Massage” through Pitchfork Advance. The album drops May 13th on Ghostly International.

OKC.NET: What are some of your favorite bands you’re listening to right now?

OKC.NET: Have you ever been to Austin Psych Fest before?

OKC.NET: Speaking of attending, do you ever just go to music shows like you’re not wrapped up in the business of it? What was the last show you went to in this state of mind?

TOBACCO: Unfortunately, I haven’t been to one in awhile.  Might try to see Guided By Voices when we get home from tour if I can get in.

OKC.NET: How would you describe your creative process these days?

TOBACCO: Sporadic. No rhyme or reason to what I do. I usually have a whatever, whenever attitude about working.

OKC.NET: What kind of visual art appeals to you?

TOBACCO: Right now, it’s been fun watching the people on Instagram who make like homage bootleg toys. Some of these, if they were cast in metal, could be looked at as amazing sculptures. 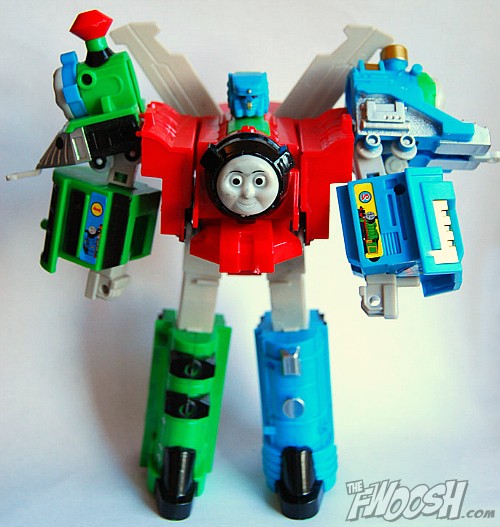 He didn’t give me a specific example, but I found one I thought was pretty funny because I’m a sucker for puns and portmanteaus. This one goes by the name: “OpThomasPrime”

OKC.NET: What’s it been like with Ghostly International as your label?

TOBACCO: Cool and easy!  I’m in good company there.

OKC.NET: What are your goals for Austin Psych Fest, a great show is a given, but is there anything about the venue itself or in Austin that is on your must see or do list?

TOBACCO: My main goal is to get in some relaxing hang out time while we’re there.

OKC.NET:  Do you plan to check out some of the vendors at Austin Psych Fest?

TOBACCO: I’m sure we will!  I haven’t seen who’s gonna be there.

OKC.NET: What’s the most recent favorite item you’ve gotten at a festival, from the merch table to whatever someone gave you?

TOBACCO: We toured with an act once (can’t say who-don’t want to get them in trouble) who would get the most intense stuff from his fans and give it all to us to do whatever we wanted.  The full-size framed painting was my favorite.

OKC.NET:  Who are you looking forward to watching at Austin Psych Fest?

OKC.NET: Will you be playing any surprise songs at APF, like perhaps some unreleased material?

TOBACCO: Always trying out something new!

OKC.NET: What is one song that you can’t get out of your head?

TOBACCO: Freescha “Babies in Your Body”.