Wes Andersonâ€™s â€œThe Grand Budapest Hotelâ€ is the education of a hotel lobby boy. This may not seem like much of a job to us today, but there was apparently a time when the task was an important one, for example look at 1930s Germany in an era historians call La Belle Ã‰poque; although here in the geography of the film you’re told it is the Republic of Zubrowka. To the boyâ€™s teacher M. Gustave, the concierge of The Grand Budapest, serving others is an exalted calling. Played by Ralph Fiennes, Gustave – the most perfumed man in history – marches down the the aisles of the hotel like a general of manners. He delivers spot-on room service. He spouts wisdom. A lobby boy â€œis completely invisible yet always in sight.â€ The lobby boy can be trusted with any secret. The boy, named Zero, wants in.

We meet Zero (Tony Revolori) after he has escaped wartime troubles in his homeland that have left him orphaned. He presents himself to M. Gustave while the concierge is in the middle of settling an issue with one of the older clients he is also sleeping with (â€œI go to bed with all my friendsâ€). Â He gives the boy a first task, light a candle for Madame D. Although in her understated distress, she asked Gustave to.

Madame D is Tilda Swinton made elderly in make-up, and named after Andersonâ€™s favorite film of Max Ophuls, a director from the same era, who fled Germany at the rise of Nazism. Keeping that historical backdrop in mind, she dies mysteriously and her fascistic family takes the reins, setting off a chain of events that disrupts the lobby boyâ€™s education and renders the film a comedy, a caper, an action adventure story. The events are caused by stubborn people who are larger than life and fantastic.

And Anderson films them with typical energy, gliding shots across the many tiered hotel (pre-produced in complete animation by the filmmakers). Swooping 180-degree pans punctuate charactersâ€™ deadpan-melodrama reactions. In movies like â€œThe Life Aquatic with Steve Zissouâ€ and â€œThe Darjeeling Ltd.â€ the â€œstyleâ€ of filmmaking didnâ€™t seem to mesh with the plot and essence as well as it does here and his last film â€œMoonrise Kingdom.â€ Thereâ€™s no dead air in the new Anderson.

The Madame leaves a painting called “Boy with Apple” to Gustave, who demonstrates with a fine pose that he thinks heâ€™s the right new owner because he looks just like the boy with apple. Â The heirs to the estate start planning. Three blundering sisters, a snake of a son (Adrien Brody) and his henchman Jopling (Willem Dafoe in killer rugby mode) go after the painting. Gustave and Zero flee. There are gunfights, disguises, a ski scene, a prison break. The young boy will keep listening to Gustave talk and talk, and somewhere fall in love with an Irish baker of intricate sweets played by Saoirse Ronan, the young stand-out of the literary movie â€œAtonement.â€

The silly but decidedly literary mood is taken from the novels of Stefan Zweig, a friend of Sigmund Freudâ€™s who was part of the productive and psychologically fragile Vienna before the great wars, cataclysmic events that seemed to follow Crown Prince Franz Josefâ€™s mental collapse, then suicide. Â The fascists imposed their might and the artists fled or succumbed to depression. Philosopher Walter Benjamin, trying to reach the U.S., commits suicide before Spanish police can arrest him. James Joyce contracts a fatal ulcer when bombs fall on the France where his daughter is being treated (schizophrenia). Stefan Zweig and his wife move to Brazil, but sadness at the loss of culture drives them to suicide; they were found holding hands.

Â Â Â “I think it better to conclude in good time and in erect bearing a life in which intellectual labour meant the purest joy and personal freedom the highest good on Earth,â€ he wrote.

M. Gustave is a frilly servant, but he embodies the ideals of this lost intellectual epoch in his good manners, his style, and his love for the varieties of life; amid misfortune, he still sprinkles a little extra salt into the mush he serves the jail bruisers. The people he meets are struck by his small acts of kindness and like in a Dickens novel his good services come back to him. The incoming class, represented by Madame Dâ€™s relatives, will call him a â€œfaggotâ€ and consider it just as well he disappeared.

Later, in a candid scene he tells Â Zero that only a few people â€œgetâ€ him, but those are the people that matter. This is as close as Anderson has come to defending himself to critics of his style. The film has a paradoxical edge that way. Anderson finally puts a word of fight in for his particular art, while insidious things like surveillance, greed, technology, poverty and rudeness keep a greater number of todayâ€™s would-be artists away from M. Gustaveâ€™s proverbial â€œfair courts of life.â€ Â Yet Wes Andersonâ€™s detailed style is not elitism. Because in its standards and beauty there is good character, which is a universal.

We see the hotel in its postwar phase, communist architecture and empty occupancy, when our narrator (Jude Law) meets Zero as an old man (F. Murray Abraham). The loss of a way of life isnâ€™t Â talked about. But it is felt with a quiet depth. Itâ€™s in the wistful bearing of F. Murray Abraham and the not-too-loud Alexandre Desplat score rolling under the surface lest it stir up any more noise. Anderson conjures delicate human mystery in making you sense a historical trauma by its absence.

And thereâ€™s Ralph Fiennes. His M. Gustave is poor, silly, and rich in personality. Itâ€™s an actor with Fiennesâ€™s gravitas who can communicate the inner nobility of the sensitive life with a character who is viewed by much of the world as frivolous. As David Carr notes, the man who played the scariest Nazi in Schindlerâ€™s List is now being chased by silly Nazis. 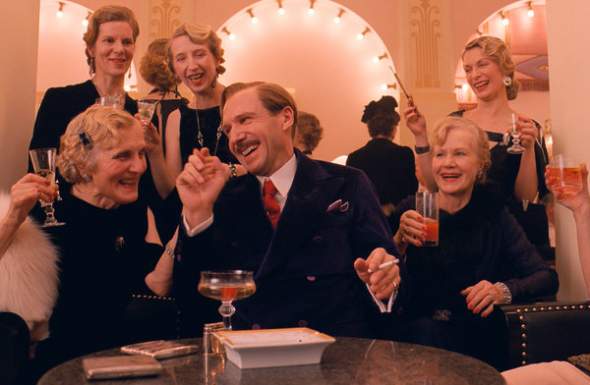 But thereâ€™s nothing silly about the insult to humanity, never mind humanity, the insult to THE HOTEL when the uniformed troops manhandle Gustaveâ€™s student on a halted train. A great actor shows us everything he has when Gustave completes this boyâ€™s sentimental education, by screaming â€œTake your hands off my lobby boy!â€ to the same nightmare of history from which James Joyce tried to awaken every time he picked up a pen. Andersonâ€™s heroic pen follows suit in his eighth lovely film.