To dress up or not dress up? I’ll leave that to you after you read the interview I conducted with SUPER! BitCon organizers Brandon Philips and David Sollars.

OKC.NET: I see that it is being put on by the RGS (Retro Gamers Society), tell me about these Ultimate VIP packs they are offering up in conjunction with the event. 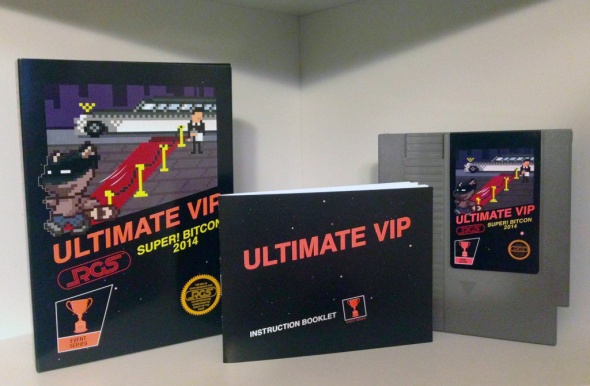 Phillips: The VIP packs are the primary advertising vehicle for SUPER! BitCon. We could have done a billboard or bus stop benches, but traditional advertising would not really speak to the core of our group. We wanted to do something more representative of who the RGS is — something eye-catching, beautiful, and collectible. The VIP Packs were born from this sentiment. Produced by a master craftsman in classic video game reproduction pieces, Vince Clemente, the SUPER! BitCon Ultimate VIP packs are the distilled essence of our convention. The packs mimic the iconic look of the first run of game packs released for the Nintendo Entertainment System, and come complete with a variety of handcrafted tickets and vouchers, as well as a handful of top secret benefits that will only be uttered to our VIPs on the day of the event. The VIP packs cannot be bought — only won.

OKC.NET:Â Why are you into these games?

Phillips: Comic book geeks of the 50s-60s collected comics when they graduated college and gained access to disposable income. GI Joe fanatics of the 70s-80s dumped boatloads of money to scoop up the toys well into their 30s and beyond at toy fairs in the 1990s. Video games are the nostalgic keystones of our generation, and now that people our age are becoming independently wealthy, the game collecting hobby is accelerating at a rapid clip.

OKC.NET:Â I see that RGS was established in 2010, can you tell me how it has grown these past few years?

Phillips: In the early days we were just a few folks in OKC hanging out, having a few drinks and pizza while playing and trading old games. Over the years the group grew in the state — and so did the hobby nationwide. Eventually RGS spilled over into Texas, then Kansas, then exploded from there. We have stayed true to the heart of the core group, however, continuing to perform our social duty via community outreach projects and fundraisers, while encouraging intra-group trading of gaming collectibles and memorabilia. We have yet to see any signs of slowing in RGS expansion! We’re excited for the future of the group and the evolution of our newly-born convention, SUPER! BitCon.

OKC.NET:Â What prompted the move to hold SUPER! BitCon?

Phillips: Our city has some incredible events with awesome gaming elements — Soonercon and Iziumicon to name a few. Oklahoma City has long needed an event to celebrate gaming in itself with due diligence. The gaming culture in Oklahoma is by far the most organized and communicative of any state in the nation. There are several dominant groups in all the areas of gaming within Oklahoma; from development, to modern tournaments, to tabletop gaming, as well as retro. It was simply time to bring all of these groups together and throw one big party for everyone. The RGS was blessed with the network and ability to host, but this isn’t just a bash for us — it’s for Oklahoma and beyond!

OKC.NET:Â What can people expect since this is a new event?

Phillips: We have packed out the Hobbies, Arts & Crafts Building at the Oklahoma State Fair Park with over 40 vendors (around 60 tables) with everything from classic to modern games, apparel, product demos, playable exhibits, and competitions. Cactus Jacks, an Oklahoma City staple, has generously loaned us a dozen of their finest arcade and pinball machines for our free-play arcade. Educational and not-so-educational panels will grace our main stage throughout the day while our side stage rocks with local bands keeping the exhibition hall energized. In the evening there will be even more contests, including a cosplay contest and a live game show. To top it off, comedian Nathan Anderson is flying in from New York to share his geek comedy set and a pair of incredible chiptune bands will bring the house down with 8-bit inspired tunes (keep an eye out for hacked Game Boys being played as instruments).

OKC.NET: Tell me about your sponsors.

Phillips: Our sponsors come from a variety of backgrounds and industries, but with a common theme woven throughout — a love of gaming. Each sponsor made an incredibly generous contribution to support our first major event — a show of faith that does not go unappreciated! We literally could not have held this event without our sponsors. As founding sponsors of our inaugural expo, they will always hold a special place in SUPER! BitCon history.

OKC.NET:Â Do you have any special surprises planned? (Not that you have reveal them)

Phillips: We have a few tricks up our sleeves, but you might need a Game Genie to unlock them before event day!

OKC.NET:Â What can you tell me about the exhibitors and vendors, and have all the spaces been filled? Can people still sign up for these spaces if they’re just now finding out about your event, or was there a deadline?

Phillips: We are proud to say that all of our vendor and exhibitor space is completely filled! We are elated with the response we have gotten from vendors not just in Oklahoma, but from Texas as well. While we never enjoy turning away potential vendors, we were fortunate to be graced with an abundance of choice for this event — meaning each vendor was hand-picked to achieve the most relevant and representative mix possible for an expo of this kind. We are very proud of our vendor list (and humbled by the excitement that they’re expressing).

OKC.NET:Â Tell me more about this Cactus Jack’s pre-party?

Phillips: Cactus Jacks could not be more of a staple of the Oklahoma City community. Everyone who grew up in the city has fond memories of tilting pins at this establishment as a kid. When we decided that SUPER! BitCon required a full arcade for our attendees to enjoy, we knew where we had to go for help in putting it together. Dan Allen of Cactus Jacks jumped at the opportunity to help us out and sponsor the arcade. To thank him, we decided to extend SUPER! BitCon to two days and hold a meet and greet at Cactus Jacks for our celebrity guests, vendors, and any attendees to come out and start SUPER! BitCon off early! We’re extremely excited about the pre-party bash and can’t wait to pack the place out and kick-off the big weekend.

OKC.NET:Â What’s the age range for this event, and how much does it cost?

OKC.NET:Â If you could be any game character, who would you be and why?

Phillips: Personally, I would be Mick or Mack from the classic Virgin Interactive Nintendo game “MC Kids”. This was a little-known McDonald’s themed video game that didn’t sell very well, but it’s a heck of a lot of fun and I would love unlimited access to Big Macs. #NoShame

OKC.NET: Co-organizer David Sollars also added to our conversation on this question.

Sollars: I would have to say Batman (if that’s not cheating). Batman is my favorite game on the NES. Sure, he doesn’t posses the powers of your average superhero, and his family history is dramatic at best. Regardless, at the end of the day, who wouldn’t want to drive the Batmobile? Also, rolling around as Bruce Wayne when you’re not out fighting baddies surely comes with its own big list perks.

OKC.NET: P.S. are all people encouraged to dress up?

Phillips: Of course! We’re hosting cosplay and costuming contests for both adults and children, with some really cool prizes — everyone at the expo is encouraged to dress up! 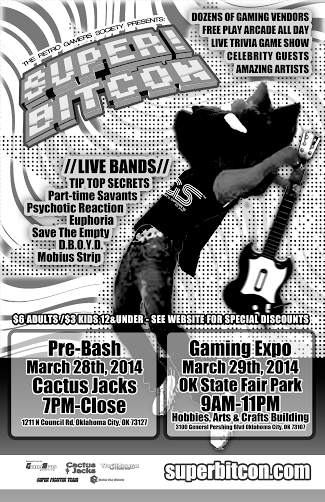