It was a busy Sunday at Othelloâ€™s as I dropped my backpack at the bar and sat next to Jennifer, the manager, who was busy moving a finger all over her iPad as Courtney, who was filling a drink behind the bar, casually greeting me. Tonight was the roast of James Nghiem founder of the comedy label Robot Saves City and popular comic in the burgeoning Norman and Oklahoma comedy scene before he left for Los Angeles on Monday. As one of the roasters I had to be mean and even harder, funny. I was nervous my jokes were not up to par, so I needed a second opinion.

â€œYa?â€ she said, taking a second from looking at her screen to acknowledge me.

â€œCan I read one of my jokes for tonight? To see if itâ€™s good?â€

Hereâ€™s the joke without any flair:

Jen adjusted in her seat a little, while Courtney was guffawing in a way a person would not expect working a Sunday night.

Jen looked further confused, â€œArenâ€™t you suppose to make fun of the person thatâ€™s getting roasted?â€

Thatâ€™s what she said, but her demeanor was one that read, â€œWhat you said was incredibly mean and hurtful, especially to a woman, but Iâ€™m a good sport.â€

My confidence in the material grew.

I read a few more jokes to Jen and there were a fewer hits than misses, but that does not a great story make. Besides, Iâ€™m not ready to describe the internal complexities of staring at an audienceâ€™s blank faces and trying to escape from the humiliation.

Jeramy Westbrook, another comedian comes with his wife, Sabre. We talk about the roast especially in regards to who we have jokes for and of course we have jokes for one another. While we all laugh it off, I canâ€™t help but wonder how racist his joke is going to be. Then James Nghiem walks in and while I canâ€™t remember what he came in doing, Iâ€™ll pretend he came in the way Iâ€™m used to remembering. He walked in with his black hoodie up before taking it off, having the trademarked comedianâ€™s slumped shoulders and looking up at us he throws up a peace sign with a head nod and maybe a smile, but mostly a hurried expression. Jen wants him to play a drinking game but he declines. He wanders off somewhere and Iâ€™m too worried about how hurtful Jeramyâ€™s jokes are going to be to bother Nghiem, so I prepare my own hurtful jokes.

More people start to entering the restaurant; comedians, roasters, friends of Nghiem, and the occasional customer. Iâ€™m too busy wandering around trying out some jokes on the tired wait staff and whoever has the patience for my ego. After a waiter lets me know indirectly that sheâ€™s busy, I finally take a hint going to a little corner behind the bar thatâ€™s the unofficial green room for comedians to work on material.

I sit in a little booth and watch past roasts to get in the mood, then Madison Allen joins me. He lets me know he has problems writing jokes for me and I tell him itâ€™s pretty easy except race jokes which are a little hack. Of course this is my opinion of most jokes about me because there are a lot more flaws to me than just my race that could be easily exploited. But itâ€™s a roast and anything goes. Hack is encouraged. Whatever you can do to get a laugh at another personâ€™s expense is welcome. Iâ€™m still nervous but Iâ€™ve written more jokes; jokes that make me laugh. Iâ€™m a little scared of bombing because nobody wants to bomb being mean to another person, you just look like an asshole. Something Iâ€™ve recently experienced.

I walk out to the restaurant surprised that the room is full for a normal open-mic, which is a good room and suddenly remember that itâ€™s past time to sign up. I rush to Jeramy Westbrook who has already written down the names of the rosters randomly pulled out of the now empty jar labelled â€œTIPSâ€.

â€œDid you put your name in?â€ he asks already knowing the answer to the question

Iâ€™m last but more people are coming in and since everybody was going on before I did, I had the advantage of watching how theyâ€™d do and reading the room. Before I know it, the host and close friend of James Nghiem, Anthony Cavazos, is bringing James to the stage where sits on the only chair. The â€œgreen roomâ€ is predictably empty as everyone is ready to see each other humiliated. The first spot on the roast is usually the hardest; you have to open the show and set a standard for the night. Dan Skaggs is on first, a comedian on indefinite hiatus and one of the first comedians I saw at Othelloâ€™s before I started doing comedy. Iâ€™m worried he might be a little rusty since heâ€™s coming out of â€œretirement,â€ but he doesnâ€™t disappoint. Dan is honest, mean, reveals some avoided truths among comedians that end up lurking as gossip, petty, and biting with his humor. He relaxes the room setting things off smoothly.

Most of the roasters do well, about two or three donâ€™t, but itâ€™s not because theyâ€™re bad comedians rather they just have a bad night. Josh Lathe, a loud and brutally honest comedian kills: Zach Smith, 2013 winner of the â€œAnnual Othelloâ€™s Comedy Classicâ€ does well; Jenny Godwin gets at everyone in the Oklahoma comedy scene, and Jeramy Westbrook makes a joke about me that helped me write one for him.

Everyone is interested and those that have been offended are recovering by laughing it off. Iâ€™m used to hearing other comedianâ€™s jokes so often that itâ€™s refreshing to hear new material when itâ€™s aimed at people you know. I get mostly racist jokes thrown my way but itâ€™s around people I trust so itâ€™s permissible particularly since I have a few of my own. I wish I could pretend that saying and doing things youâ€™re not supposed to isnâ€™t fun, but it is and when itâ€™s ok to do so, you have to expect it.

After a mixture of old comics and new comics, Iâ€™m up next. I get up on stage and shit on my friends. I do material on physical appearances, terrible sets, personal issues, race, I accidentally steal an Amy Schumer roast joke, and quote the 8 Mile Soundtrack. Not all my jokes land but most got big laughs and I am pleased with my performance, so much so that I walk out of the restaurant immediately.

I have a hard time receiving compliments for numerous reasons but mostly, they are hard to trust. I have trouble counting how many times Iâ€™ve given a compliment to avoid hurting feelings. Who hasnâ€™t given one when everyone else is so as not to appear spiteful or jealous? Besides, if you are a slave to compliments you tend to give the crowdâ€™s voice more value than yours. Itâ€™s uncomfortable and complicated, but the real reason I stepped out was because it got surprisingly emotional.

James was finally leaving. Heâ€™d talked about it a lot and it just seemed like it would never happen. James had been doing comedy around Oklahoma for years making him a staple in Oklahoma comedy. He was the first person I told I wanted to try stand-up, letting me send my jokes to him; Iâ€™d guilt him to give me rides home after open-mic on Tuesdays because heâ€™s a good friend.; heâ€™d remind me that weâ€™re all insecure tightly wound balls of razor-wire whenever I had an issue with other comedians; and politely walked away when comedians were talking gossiping about each other.

The magnitude of his absence not only made me miss him, but reminded me of where I was in life. While the Oklahoma comedy scene is growing itâ€™s not a complete or respected one. At least not yet. Itâ€™s hard to find work or get booked on showsâ€”most of the time you have to organize your own showsâ€” and itâ€™s a lot more emotionally taxing than youâ€™d expect for comedy. Moving is the best option. Itâ€™s a sign of progress and taking your comedy seriously. Lots of past comedians have moved and while few have commercially visible success, they get better in their craft as is apparent when they come back to visit. This just reminds me that I need to work on my shit.

I come back soon enough to catch the tail end of James Draperâ€™s set. Before James Nghiem can go up, Cavazos roasts everyone he can get his hands on then tells a funny story about James Nghiem almost getting into a fight over basketball. I wouldnâ€™t go into any details, but Mr. Nghiem took his shirt off–itâ€™s a surprise for everyone given Nghiem pacifism.

James finally takes the stage and of course this being his roast with the cards stacked in his favor, heâ€™s set up to win. He goes after most of the older comics and a few of the newer ones; he gets me with this gem.

â€œOsi Akenâ€™Ova in private conversation likes to refer to me as his comedy dad. It was really creepy at first till I realized that traditionally in Nigeria your dad is two years younger than you.â€

He later picked up his guitar and sang a song about Oklahoma comedy and called out Brady Leach, a newer comedian, and Amanda Webb, a supporter of comedy around Oklahoma and assistant at Robot Saves City mostly because no one went after them.

The roast is over and after I finish calling Jeramy Westbrook and Jenny Vetor-Godwin bitches for making jokes at my expense, I realize that Iâ€™m in a good mood. A few comedians and audience members leave after congratulating and thanking one another. A group of us suggests we either go Sugarâ€™s, a strip club with a bar, or The Birdâ€™s Nest a bar with no boobs, while James quietly suggests Waffle House. We head to The Birdâ€™s Nest because weâ€™re probably too tired or old to pretend to enjoy the illicitness of a strip club and some of us want to get more drinking done.
The Birdâ€™s Nest is almost empty since itâ€™s a Sunday night and I spend most of the time dancing to the pop/contemporary/ bar music theyâ€™re playing while drifting from one conversation to another. I overhear the bartender ask James to tell her a joke and instead of rolling his eyes or taking the opportunity to be rude, he explains that isnâ€™t the way it works. Such a nice guy. 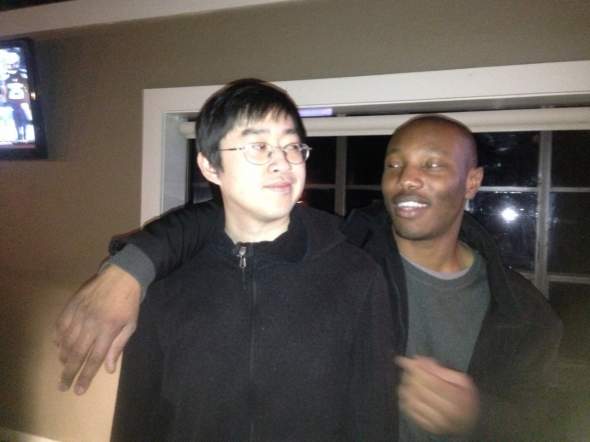 Everyone is tired at this point but the need to have more fun outweighs sleep. I ask a friend to take a picture of Nghiem and me before he leaves since I canâ€™t recall having one. I try to make it as genuine as possible so I can remember how the moment was and before I know it everyone is either heading to Waffle House or going home. Iâ€™m going home.

I say goodbye Nghiem and walk towards a friendâ€™s house with a comfortable couch, sure Nghiem would probably visit, but even knowing this, Tuesdays at Othelloâ€™s will not be the same.