You know what never fails to get a laugh on a less than stellar day? Crazy animals. Cat owners have their stories. Sure. Not that cats ever appear to be “shamed,” they’re too busy being all “LOL” up in “yr interwebz,” but if you own a dog, then you’re familiar with the look. In an AP article making the rounds, the experts on dog shaming would have us believe man’s best friend will never be sorry for pooping on the rug or stealing your sub sandwich when you weren’t looking. But this shouldn’t come as any real surprise if you own a dog with issues.

“Behaviorists insist dogs lack shame. The guilty look â€” head cowered, ears back, eyes droopy â€” is a reaction to the tantrum you are throwing now over the damage they did hours earlier.” – AP

Probably not news to anyone who’s had to deal with a naughty pooch who can’t seem to stay out of the trash or (your dog’s evil deeds here), but don’t let that stop you from shaming them online. It’s not like they’re going to know and the rest of us could probably use the laugh. 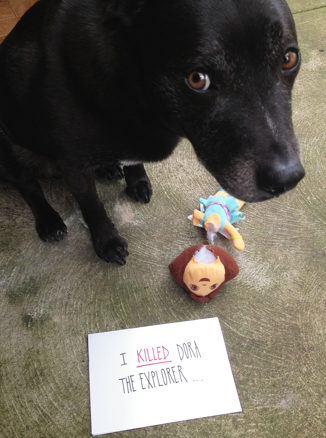 Honestly that article we linked to is complete fluff, but with like not enough pictures. Oh, alright, they did throw in a little bit of science and got a quote from “sources.” But since they didn’t bother to ask the dog whisperer his opinion, I mean really – the story came out of L.A., I went and looked up what Cesar Millan has to say on the subject of dog emotions. 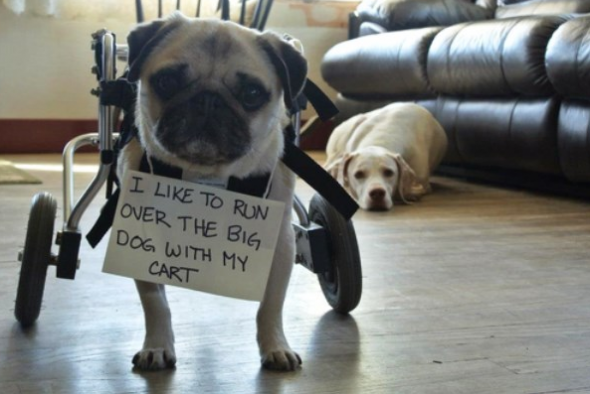 “Most dog owners are familiar with the telltale signs that indicate their dog has been â€œup to no goodâ€ while theyâ€™ve been away: the lowered head, ears swept back, the hunched posture, and a doleful gaze. Even if the fruits of the dogâ€™s bad behavior are not immediately apparent, his body language seems to point to feelings of guilt. But for dogs, the emotion is slightly less complicated than human guilt or shame. Your dogâ€™s submissive postures are the result of anxious anticipation; an expected disciplinary action. It may have been your reaction to similar behavior in the past, or it may be the change in your energy and body language when you discover his actions in the present. Your immediate reaction in any disciplinary situation creates an association for your dogâ€¦ he now knows that his actions will lead to discipline or punishment.”

You can go down the rabbit hole on his site later if you’re looking to seriously address a known issue with your pet’s behavior. But most of us know enough to admit we shouldn’t have left a sandwich within the reach of any short dog. I have no source to fall back on, but let’s entertain the idea that some of this shame is a little about us being ridiculous too. 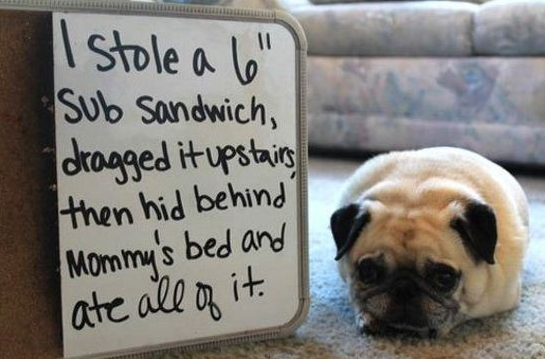 All said, some of us have some pretty unrepentant, quite possibly dumb-as-brick dogs. Well, I say that, I know there are some dogs out there that are not quite that stupid, sometimes you have to be clever enough to get into something, so some are just that relentlessly sneaky. And we know no matter what we do, whatever weird quirk they have will to lead an “incident” sooner or later, which is why we must be proactive about not giving these little scavengers opportunity! 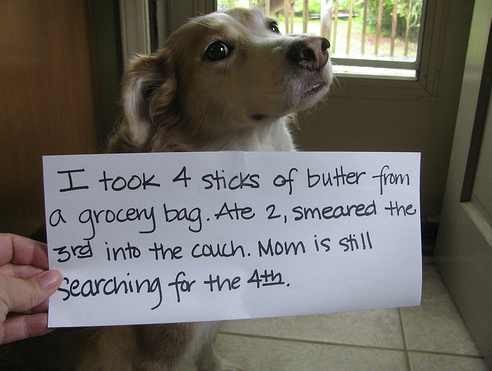 Clearly “dog shaming” and its popularity on social media and websites is more about giving us the opportunity to laugh at someone else’s crazy pet problems and not feel guilt about shaming our own dogs since man’s besties don’t seem to be very aware of the Internet either, unlike LOL cats and children (<— who have the most potential to be emotionally scarred in this group). And obviously it gives us an immediate outlet for our own anger when our pets do something destructive because they know in their furry little hearts that for one bright, shining moment of glory and instant gratification they can absolutely get away with mayhem. 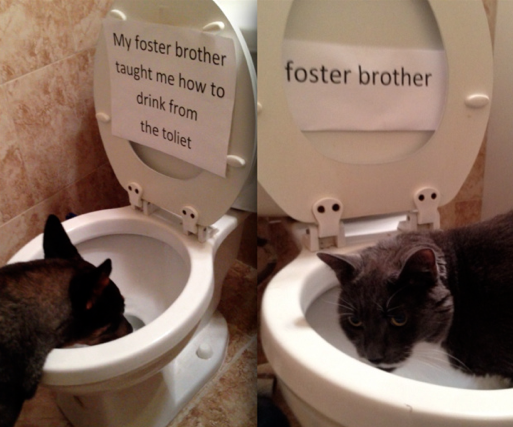 Science has determined cats have no shame and will smugly laugh at you, if not challenge your dominance, from their haughty place in the animal kingdom. Remember, you feed them, not the other way around. And your crapper is a fresh and fragrant waterfall compared to their dirty, festering box which you, the lowly human, are to clean by hand regularly. [Citation needed]

So take home message of the day: learn to laugh it off. Plus take photos. Then share them. 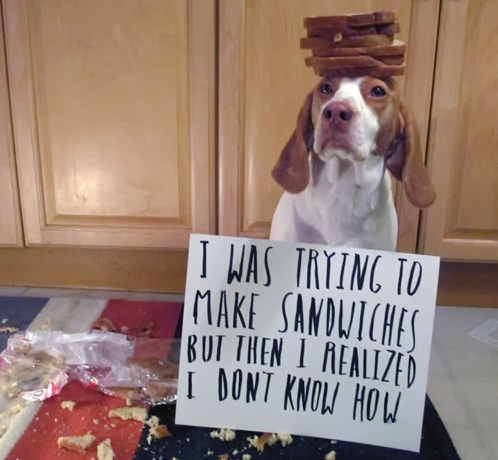 Ok, one more. Because you clicked this “article,” and I use that term very loosely, for pictures. We know it wasn’t because you wanted to read about “science,” cats, or be convinced that laughing at doggie misdeeds is indeed still ok. Also seriously, dogs are G-R-O-S-S. But that won’t stop us from encouraging you to adopt or foster them. Just do it knowing that things like this will happen and you’ll probably feel more shame than this dog when it does. (P.S. spay and neuter! P.P.S. also mounting is a behavioral problem you can fix, no pun intended.) 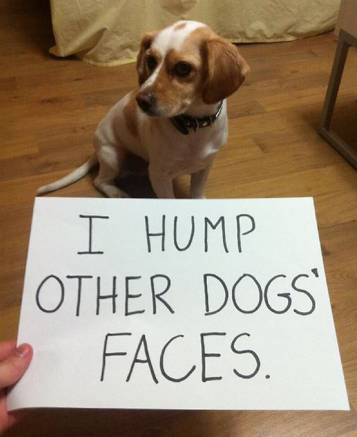