Mayoral candidate Ed Shadid has made public safety one of the core issues of his campaign, noting the increase in crime since 2004 and what he contends is a pattern of under-funding and under-staffing core services. Shadid has been endorsed by the Fraternal Order of Police and the Firefighters Union on his promises to prioritize police and fire protection, including in the hiring of new officers. Mayor Cornett has pointed to increases in the police budget over time and to recent success in reducing crime. There are also questions as to how additional police presence would actually reduce the crime rate.

I have crunched some of the numbers to see what we can learn about crime in the city, the number of police on the beat, and whether increased police presence leads to lower crime. Sources used: City of Oklahoma City Office of Budget unless otherwise noted.

Increase of 23 citizens per officer

Increase of 3 citizens per officer 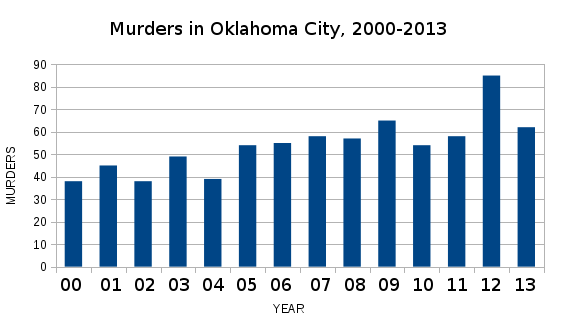 What accounts for this?

Certainly part of the reason is increasing population. More people means more demand on public services. The state of the national economy may also be a contributing factor, drawing people into the city and also motivating property crime. But why did crime seem to jump after 2005, and why did the murder rate shoot up so dramatically in 2012?

The next most important question is: if crime is up, will hiring more police cause crime to go down?

The answer is yes. Sort of.

Multiple studies in the past decade have shown that in situations where there is artificially higher than normal police on patrol in a city, property crime drops, often significantly. This has been shown in multiple cities in the US and reproduced globally. The average impact seems to be that an increase of 10% police presence leads to a decrease of crime by 3%. 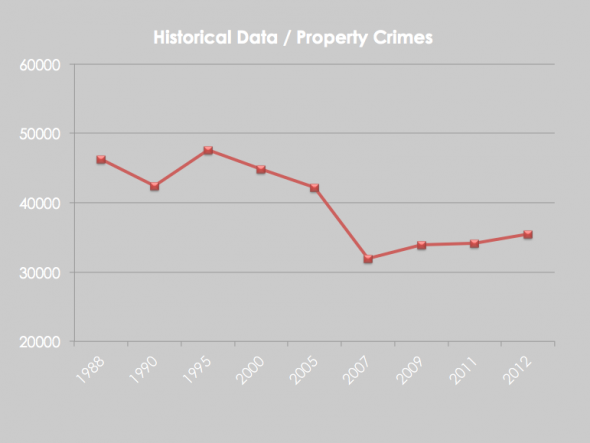 Obtained from the OKC Public Safety Meeting on Feb. 13th. 10% more officers on the beat could cause this trend to reverse by 3%.

So, great news, right? If you own a car or a house or a bicycle, yes. If you are in an abusive relationship or if you live in an area with a lot of violent crime or if you engage in activities that put you at a high risk of encountering personal violence, the effect of greater policing is much less significant. The police rely on community involvement and cooperation in more serious crimes much more than they do in property crime. Shadid claims there are not enough police on the force to answer calls quickly enough let alone have officers available to engage in “proactive” police work. Cornett said in interviews that he knows of “no magic number.”

You can see some of this in the way that rape statistics vary so wildly over time. Rape is one of the most underreported crimes nationally; women are far more likely to tell their friends or doctor about a rape than to tell the police, if they tell anyone at all. This leads to incredibly difficult to quantify statistics. A rising rate of rape reports might actually be a sign of better policing and community outreach or it could also mean a very statistically significant rise in the rate of rape. I’m inclined to believe that this may be what is at work in the crime statistics for 2013: crime overall went down in every category except rape, and from what I know it’s rare that one crime shoots up while others are decreasing without something dramatic happening. 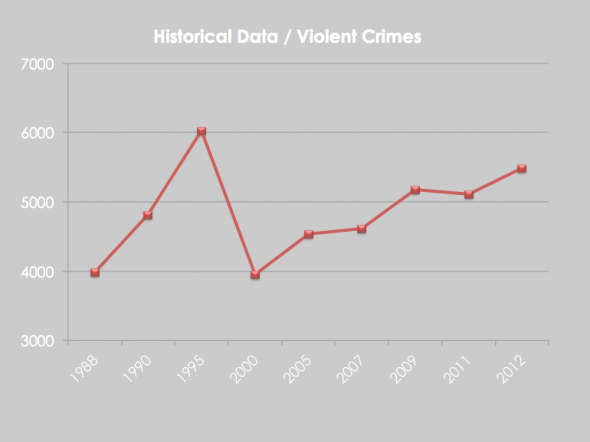 Obtained from the Public Safety Meeting on Feb 13th. It is unclear how a stronger police presence could reduce violent crime outside of being more proactive in the community. Although response time would be faster if there were more officers on the force.

So: The good news is that most forms of crime are down from 2012. The bad news is that it’s up for the decade. Our police budget has increased, but individual officers are under more pressure. The number of police per capita in OKC is slightly lower than the average for cities of our size, but is not significantly out of the ordinary. Will hiring more police bring down the overall rate of property crime? It almost certainly will. Will it bring down the number of more serious crimes? That is less clear. No matter who gets elected March 4th this issue will require further investigation and perhaps require more community input and involvement than we’ve seen this past decade.