When last I spoke to Austin-based musician Sam Chown, he was touring with his other band Zorch and they’d just played Womb Gallery at the invitation of Wayne Coyne. Now he’s back in OKC with his solo project Shmu supporting the release of his EP “Chroma Key.”

I wasn’t sure what to expect since I had only had Zorch for comparison, but I liked this EP. And as I pledged sometime ago, I’m only writing about music I really like and this hits the spot for me. Shmu’s musical tag: “dream pop/shoegaze meets glitchy psych fusion sexy baseball.” How do you make sense of this? Well, if you’re like me and enjoy Flying Lotus, Thundercat, and others like them on Brain Feeder’s label, Shmu’s glitchy-psych fusion is a sonic vortex you’ll want to get lost in. As for “dream pop” and “shoegaze,” I especially loved the ambient synths and airy samples on “Chroma Key.”

You can hear dreamy haze right off the bat in “She’s Leaving,” which is quite possibly my favorite song on the “Chroma Key.” Chown’s voice in “She’s Leaving” also reminds me of Justin Vernon’s (Volcano Choir, Bon Iver), chiefly in the chorus when his falsetto soars high above a sonic collage of glitch, drum machine, and the repetitious phrase, “she’s leaving.” The next track “Mollasacre” recalls the likes of Toro Y Moi and Washed Out with it’s chill synth and beats, plus I like the funky bass line. From there the next song that really stood out to mind was “Do You See What I See,” which for whatever reason reminds me of a glitchy, chillwave version of a spacey, extra fuzzy Tame Impala track, a la “She Just Won’t Believe Me.” If I had more time to suss it out, I’d tell you why this is the case – maybe I’ve listened to too much Tame Impala lately.

I could sit here and compare Shmu and “Chroma Key” to other artists and albums, but honestly, Chown manipulates a familiar sonic palet and creates something all his own. As of late, I’ve not heard or read any buzz of any local band in the OKC metro that compares to Shmu’s style of music. But take a listen for yourself and see if you don’t end up liking some or all of “Chroma Key.”

And since I enjoyed the EP, this lead to a chat between Chown and I about the music comparisons, Shmu, and the upcoming show with Bed People and Eureeka at The Blue Note, 2408 N Robinson, OKC, this Saturday January 18th, 9 p.m. $5 cover.

OKC.NET: Did I just completely go off base with my first impressions, or are those artists influential for you?

CHOWN: That’s funny that you think my voice reminds you of Justin Vernon on ‘She’s Leaving’ because I always saw my vocals on ‘Do You See What I See’ as Justin Vernon-esque on top of Radiohead meets Thundercat musically. I like all your comparisons!

I’m a fan of Toro Y Moi, but my style is something I have developed organically and independently over time. It’s really hard to boil down how I got what sounds or why I did certain things at certain times musically. I will say though that I really love the first Thundercat album & that really inspired me to make something that sounded like shoegazer/dream pop music being fused with psychedelic RnB. Then take all that madness and put it through an electronic/glitchy blender, which I think Thundercat does perfectly on that debut album. Kinda like Shuggie Otis meets My Bloody Valentine through the telescope of Squarepusher with hints of CSNY vocal harmonies. Or, If Steely Dan was still relevant or cutting edge, like 2010s Steely Dan?

OKC.NET: Oh, Steely Dan. I guess after seeing Zorch, I was expecting more frenetic music, but as Shmu, I feel this is more chill by comparison. Still energetic, but not frantic. Who all contributed on “Chroma Key,” or was it all your handiwork?

CHOWN: Yes, Shmu is a lot smoother. It’s the more gentle & feminine side of my musical voice. I played almost all the instruments on the record, however I do sample Zac Traeger from Zorch as well as collaborate with my longtime pal Geoff Earle on ‘Mollasacre,” who also has a record coming out with that song on it. We’re kinda doing a Puff Daddy/Ma$e thing where we both release the same song on our solo records, brilliant marketing strategy a la 1997. Evan Kleinecke & I mixed and mastered it together as well.

OKC.NET: Is Shmu completely solo or will you have touring band members with you at The Blue Note?

OKC.NET: Where do your touring plans take you after this?

CHOWN: This is the first Shmu tour ever so I’m not really sure. After this tour, I’m going to start writing and recording again as well as playing out with Zorch, all this is up in the air at this point. However, you can be sure to catch Zorch all over Austin during SXSW & maybe Shmu as well.

OKC.NET: Can you tell me a little bit about the other bands playing with you that night, like did you know them before this date, and if so how did you guys come to find each other’s music?

CHOWN: Bed People is Grace Gordon’s dirty, fun rap project. I’ve never seen them live, but I’m very excited to see how they shred live. Check out this video, it’s so raunchy that Grace has been disowned by her boyfriend’s rents! I’ve never seen Eureeka either, so we’ll all be new to each other!

If you didn’t catch it the first time, Chown said this got Gordon disowned by her boyfriend’s parents, so think probably NSFW if you happen to be reading this in a cubicle somewhere with a mouth-breather, middle management type lurking around looking for subordinates to shame/write up. If this doesn’t apply to you, dig in.

Keep track of Shmu via the following ways: 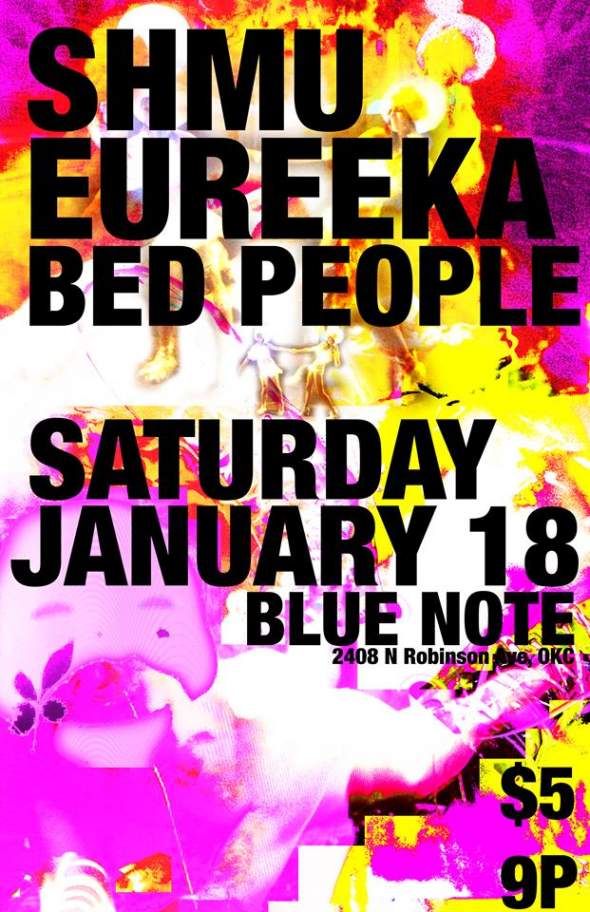