Can this be true? We live here forever for just a brief moment. – Netzahuacoyotl, 1470

Don’t be afraid little bud. Death is the greatest blooming. The most profound of awakenings. It is journeying through Mictlan. Shedding every last bit of carbon until youâ€™re as pure and slick as the day you were born. Shimmering and smooth as obsidian, dark and reflective as the night sky and just as endless and eternal.

The Aztecâ€™s celebrated those who took this journey. They called it â€œMiccailhuitontliâ€ and â€œMiccailhuitlâ€ the Small and Great Festival of the Dead for children and adults respectively. It was traditionally held in the month of August or â€œTlaxochimaco,â€ meaning â€œThe Birth of Flowers.â€ Altars were adorned with â€œCempoalxochitlâ€ or marigolds and â€œCopalli,â€ which means â€œblessed is the pathâ€ was burnt. Urns were put on altars, mummies were unwrapped, all the dead, physically present or not, were ritually fed chocolate, fowl, corn, squash, beans, cactus, chile and amaranth. This was done because the people of Aztlan understood the symbiotic relationship between the living and those returned to â€œHuehueteotlâ€ or â€œThe Great Mystery.â€ 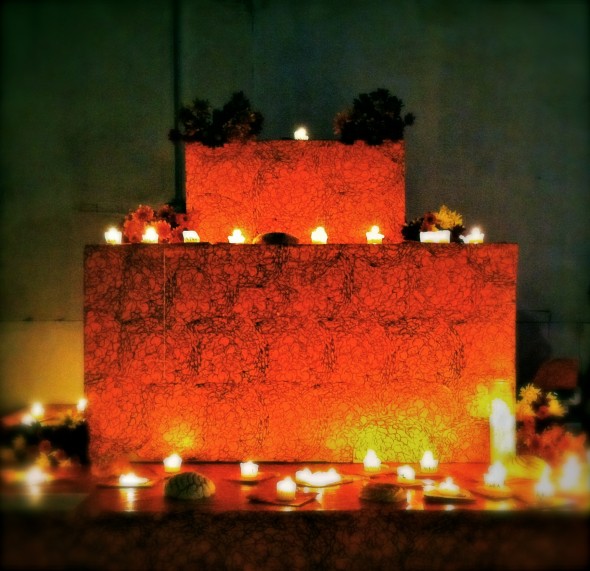 The ofrenda at the IAO and Film Row October Premier was built by Alicia Smith and was on display at Odd Fab Design Lab. It was also used by HASA at OU for their 2nd Annual Day of the Dead celebration.

In this way you could call upon your ancestors for guidance and they could you in turn. There was singing and dancing to help lead the spirits back to their loved ones. People covered their bodies in ash and wore bones. A Xocotl pole was erected and bloodletting was performed. A mock battle was staged in front of the temple of the sun. People from every class came to throw marigold blooms at each other. Delicate petals bursting from their buds.

â€œThough the feast fell in August, I suspect that if it is an evil simulation (which I do not dare affirm) the pagan festival has been passed to the Feast of Allhallows in order to cover up the ancient ceremony.â€ – Fray Diego Duran

Europeans spread like the pox in Aztlan. The feverish conquest lasted 2 years. The Spanish were victorious. They were quick to destroy the temples as churches erupted like pustules on an already blighted landscape. The children were taken by the priests and forced into Catholic schools. Some adults, or those found â€œirredeemable,â€ were enslaved. The church allocated how many Indios would be put in the â€œcare ofâ€ each conquistador. 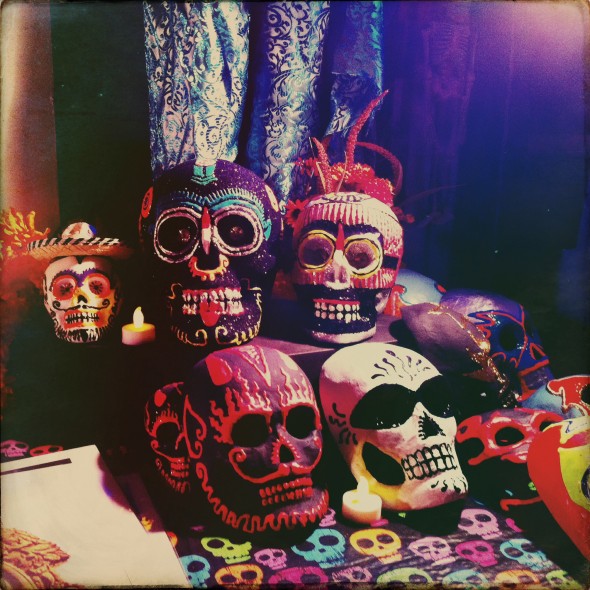 Their hair, which was believed to keep part of their souls intact, were cut. If they were caught speaking their native tongue, they were beaten. Women were raped, creating â€œmetisâ€ or â€œmestizos,” in an attempt to dilute the indigenous blood of later generations. They had very nearly eradicated our philosophy, knowledge and customs. Until All Saints and All Souls Day had been taught to them. And how appropriate to honor the dead in the ancient way and on the day when the blessed who werenâ€™t canonized are to be honored? And following that, a day to honor all faithful people? Fray Diego Duran was aghast when he found the Indians making offerings in the cemetery on All Saints day. â€œI was told this was in honor of the children. I inquired whether offerings were also made on the Day of the Faithful Departed and the answer was ‘Yes, in honor of the adults.'” How heroic that in spite of their world shattering around their trembling skin, in the wake of conquest and severed souls, the Aztecs held fast to tradition. Tall and strong as a Xocotl pole. And just like that, the scabs fell off. 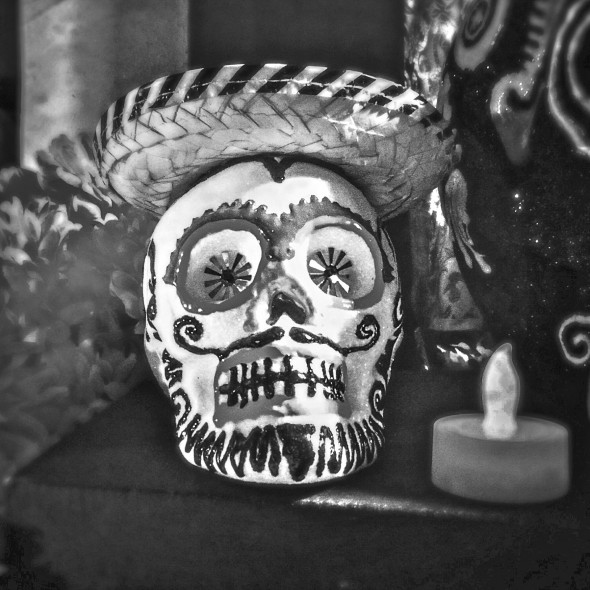 “The Mexican. . . is familiar with death, jokes about it, caresses it, sleeps with it, celebrates it; it is one of his favorite toys and his most steadfast love. True, there is perhaps as much fear in his attitude as in that of others, but at least death is not hidden awe….Death as nostalgia, rather than as the fruition or end of life, is death as origin. The ancient, original source is the grave, not a womb” – Octavio Paz 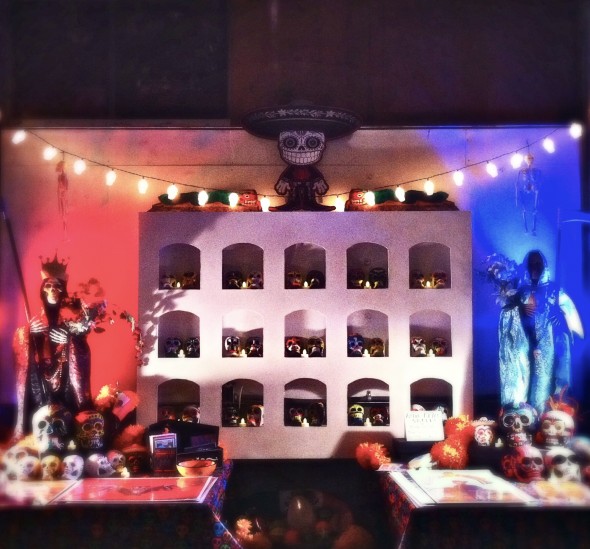 A scar is a veil. Opalescent memory. If Dia De Los Muertos were flesh, it would look like Xipe Totec. True to its roots; the skin of the enemy is draped over tradition. Today in Mexico marigolds are brought to the cemetery, copal is still burnt, filling the air with the sweet smokiness of a juniper-like scent. Ofrendas or altars are built in honor of the dead and dressed in photos, candles, food, and flowers. People paint their faces and wear skull masks. Calavera, Calacas, and Catrinas dance and sing and celebrate in the streets. In Guatemala they beckon souls with brightly colored kites. A flower must die before it releases seeds. Weâ€™re no different. Everything has â€œInamicâ€ a polar opposite. No matter the sickness the ritual still thrives. Strong as volcanic glass. Death is not an end, but a reflection of life. 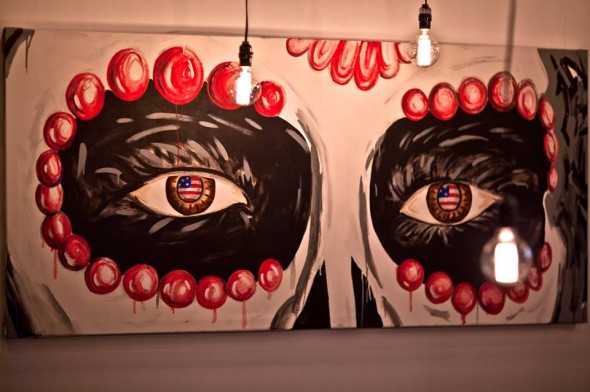 IF YOU WORE A SUGAR SKULL MASK OR FACE PAINT FOR HALLOWEEN! IF YOU ENJOY DIA DE LOS MUERTOS ICONOGRAPHY, PLEASE READ:

I heard a story this week about a Honduran man trying to get over the border to find work so he could send money back to his sister, who was ill.

That’s how all the stories seem to start.

He heard about this woman who was a coyote, who would help people like him cross into the states. When he and his brother went to her, they were beaten and put in handcuffs. They were kept in a holding cell with many other people and forced to give phone numbers to family in the states to pay their ransom.

During their transport to another holding place, a pregnant woman, fell and sprained her ankle. One of the accomplices to their ransom and kidnapping attempted to help her.

“Plaza Mayor is pleased to announce its Second-Annual Fall Festival which will celebrate Halloween and Day of the Dead (DÃ­a de los Muertos) combining both traditions from the United States as well as traditions from Latin-American countries. This event will be held in conjunction with the Oklahoma City Public Schools, with support from local businesses and independent artists, from Friday, October 31st through Sunday, November 2nd.”

“OUâ€™s Day of the Dead is geared toward college students and children, with free admission, face painting, food vendors, a ferris wheel and even llamas in costume (llamas are a symbolic animal in many Hispanic cultures). The group Yumare will perform a folkloric dance, and local bands Tequila Azul and Clips and Hips will perform.”

“Day of The Dead, or DÃ­a de los Muertos, is a celebration of Hispanic heritage which honors loved ones who have passed away. The event is held at Living Arts of Tulsaâ€™s new location, 307 E. Brady, in downtown Tulsaâ€™s Brady Arts and Greenwood Districts. This time-honored tradition has been celebrated by Living Arts for 20 years. An extremely popular event, it captures the attention of thousands each year.”