Oklahoma City Councilmen Ed Shadid (Ward 2) is running for mayor. Not everyone is thrilled – The Oklahoman attacked his candidacy immediately after it launched, characterizing it as negative and defined by “class envy,” and the response to his candidacy on our Facebook pages has been mixed. We can’t tell you who to vote for, instead we can tell you why we support Dr. Shadid. And then encourage you to meet him and decide for yourself.

We’ve had a chance to meet the councilman and talk to him about his campaign and his ideas for where the city is headed. We’ve heard what Shadid has in mind for OKC and we are excited about his vision for improving infrastructure, transportation, and creating a bottom up, community driven model of development. Our progress over the last two decades has indeed been extraordinary, but we are moving into a new phase now.

In terms of what drives cultural change, I don’t believe in the “zietgeist” or any of that metaphysical mumbo jumbo. Structures and processes drive everything, and this entire part of the country is undergoing massive structural change at the moment. Expect lots of new neighbors, increasing urbanization, and the social and political change that comes with it. Choices we make over the next 5 years will determine what kind of community we have in 30 years. This is a chance for the people of OKC to say that we are interested in putting the resources of the city at the disposal of the people. As much as some of our city leaders want to take credit for our recent development (and they have been important, don’t get me wrong), in the end progress always comes back to the community stakeholders: residents and businesses.

Would you rather live in Houston or Denver? Both were mid sized regional energy economies not so long ago. These are exciting times, and we need dynamic independent leaders to keep up with them. 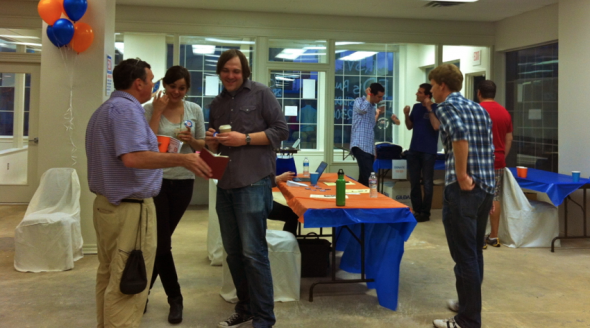 You can meet Ed and find out about his vision for the city at The Farmer’s Public Market tomorrow night at 6pm.