The In Color Film Festival was the place to be last Saturday. Film Row was buzzing with people who were just exited to be present. I was one of them. This being my first film festival, I didn’t know what to expect. But I was pleasantly surprised at the end of the night.

The In Color Film Festival is one of a kind here in Oklahoma. Its mission is to draw attention to films from minority independent filmmakers and others whose films highlight multiculturalism in Oklahoma. It was organized by Nathan Lee, of Inclusion in Art, in conjunction with Individual Artists of Oklahoma and The Paramount. The all-day affair included many different kinds of films; from documentaries to short films.

There was something for everyone. For hip-hop buffs, there was American Beatboxer: a film that followed professional beatboxers as they competed and made a name for themselves. On the Grind, which has been making its rounds at several film festivals, focused on the struggles of inner city youth in California as they expressed themselves through skateboarding.

The film I Said I Would Never Paint This Way Again followed the lives of Native American artists has been four years in the making. Artists expressed their desire to come together and teach people through their art and to challenge the stereotypes of Native American people. And regardless of your feelings about our current governor, the film First & Female is an important one that all young, female Oklahomans should see.

Danny Marroquin’s film Skywriters featured Oklahoma artists Jabee and John Fullbright. The focus of this film is storytelling. Both artists tell stories about growing up and show the places they’ve come from. Marroquin also gives a new meaning to the genre “folk music.” He emphasizes that the term “folk music” should not be limited to the kind of music John Fullbright makes. Folk music is redefined as any kind of music that tells stories.

The film that hit closest to home for me the most was Transcend. Transcend was a documentary on African American art in Oklahoma. The film followed 5 black artists as they discussed matters of race, religion, and sexuality and how they all have an impact on their art. This film brought up the unfortunate fact that art is not as highly valued in the black community as other things. One filmmaker says that this is a result of a new middle class in the black community. Because of this unfamiliarity with art, the definition of African American art has been skewed.  And in the end we were all asking the same question as the filmmaker: what is African American art?

In Color was a great first film festival experience for me and I’m looking forward to next year. 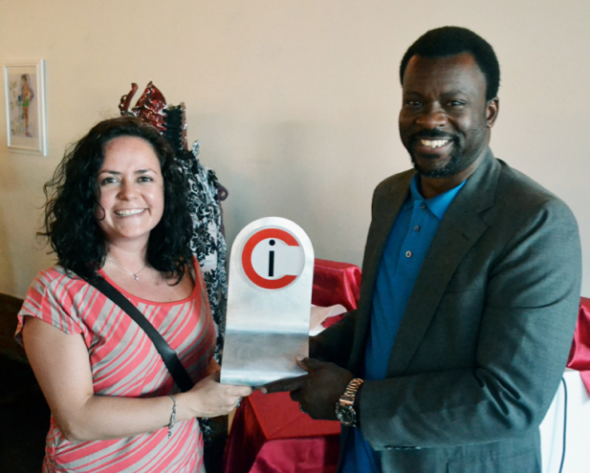 If you’d like to see photos of the event, check this link.