â€œElysiumâ€ is a science fiction film that takes place during the year 2154 in Los Angeles. It involves a fictional space station called Elysium. While planet Earth is poor and has very limited access to health care, the citizens of Elysium have equipment that will heal any ailment, from a face that has been blasted off by a robot to cancer.

Matt Damon plays Max. From flashbacks at the start of the film, Max is presented as the only hope. He is in love with a good woman and has been raised by Mexican nuns (the cast has basically a 90 percent Mexican American population and a game Damon). Max has found no outlet for his skills except to steal cars with the criminal underground (whom Diego Lunaâ€™s Julio is a part; he also worships Max). Though at present Max is trying to good by working his factory job.

Still he is being harassed by a robot bureaucracy and a boss who really has it out for him. When he is asked to retrieve a pallet from a dangerous location Max is accidentally doused with radiation. He will die in 5 days if he doesnâ€™t get to Elysium. Since fate has forced his hand, Max returns to the criminal underworld. Meanwhile the military leader of Elysium, to keep poor people out, has hired a mercenary of unsavory and underground power (think Blackwater). He is played with humor and ferocity in a stand out performance by Sharlto Copley — the star of the director Neill Blomkamp’s innovative and successful debut â€œDistrict 9.â€ 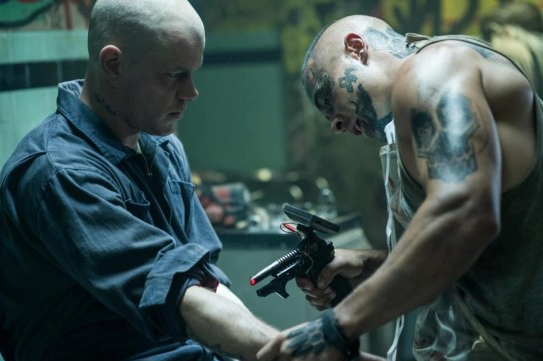 Maxâ€™s journey is filmed very impressively for a summer blockbuster, and with a kind of frenetic, brutality-tinged humor that welcomes comparisons to Paul Verhoevenâ€™s “Robocop.” In the future, there is no place for smart ambitious guys like Max, or passionate defenders of justice like Robocopâ€™s Murphy. And both directors really put their heroes through the ringer. Here Max has a ghetto robot suit drilled into him by tattooed gang members in an operation room from hell. He gets radiation poisoning. Heâ€™s chased and beaten up by Jodie Fosterâ€™s mercenary team. His boss hates him. Will he make it to Elysium in time to stay alive to maybe have something to offer the love he hasnâ€™t yet pursued, Fray (Alice Braga).

If he got to Elysium would he even like it though? Itâ€™s hard for the viewer to know. Blomkamp has such an abiding interest in constructing the ghettos where society puts the sick and unwanted that he completely forgets to portray Elysium in a way that would make the inhabitants relatable, or what makes them the kind of enemy we infer them to be. We know they have beautiful women, yard parties, and those cure-all machines. But if the poor people arrived (and they keep on trying in this film), what would they make of this brave new world? This is perhaps why Max carries a locket with Earth in it, a present from the nun who raised him, and a humanistic sentiment that we are all children of the world.

I canâ€™t imagine Elysium will please all. Someone around me mentioned he thought the lines were cheesy, but the visuals stunning. I give it credit for handling ambitious material, working on a tight budget with casting (they could’ve saved money by not casting Foster) and for creating an interesting and grungy desert world where itâ€™s even more dog eat dog than even the shabbiest parts of our big cities today. I viewed it as a pretty bold statement on our vanishing middle class and flawed health care system. I mean, 46 poor people are shot out of the sky and murdered by Elysium and the president (a high achieving Patel) lets them get away with it. Certainly Blomkampâ€™s not unpassionate vision is more pointed than anything Iâ€™ve recently seen on television about the income inequality topic. Science Fiction, posing as strange future, has long been a clever disguise for the malfunctions of our own existence. “Elysium” fits right into this tradition.

I imagine the road to success in Hollywood is most efficiently traveled by keeping a healthy dose of cynicism in mind as a defense. Blomkamp doesn’t have much of that, something else rather. By creating an all suffering lead he has given a spiritual dimension to the issue that seems to escape talk on the subject (Paul Verhoeven who also took this angle, in “Robocop’s” corporate state run and bankrupt Detroit, spends his non-filming time on an actual religious panel of thinkers from across the world). That Blomkamp has woven this potent dilemma into a fast-paced, relatively short, suspenseful movie that entertains is a bold signal that after one hit he is a director with as much on his mind as he has technical skill. Heâ€™s one to watch. As is the film.