A few months ago the Paseo Arts Association started a new arts scholarship geared towards hosting an installation within the association’s gallery. Artists were encouraged to submit proposals of what they’d do with the space and a stipend of $500. Narciso ArgÃ¼elles’ proposal was selected from the pool of applicants.

ArgÃ¼elles wanted to bring the culture of Chicano street art to a traditional gallery space. Additionally, he wanted encourage gallery visitors to interact with some of the installations. Think of it as an opportunity for a “cultural exchange” of sorts. If you’re not a Spanish speaker, just know that “Y Que?” means “And what?” So if you’re a bit confused as to what Chicano art is, don’t worry. This installation aims to give you an experience and some cultural perspective.

Narciso ArgÃ¼elles is an artist and educator who grew up in Mexico. I first encountered his art photography at OKCMOA’s bi-annual PhotoSlam series and I’ve seen his work and proposals pop up in a few other gallery spaces since then, including Tulsa’s Hardesty Arts Center. His art has been exhibited all over the world including: the Ninth Biennale of Sydney, Australia; and the First Johannesburg Biennale in South Africa. ArgÃ¼ellesâ€™ goals include the promotion, preservation, and celebration of Mexican, Chicano, and Indigenous art.

Earlier this week I popped into the Paseo Art Association’s (PAA) gallery to check-in on Narciso’s installation project set to debut Aug 2nd during Paseo’s First Friday Art Walk.Â  I wasn’t entirely sure what he’d been planning to do with the space, so I have to admit I was surprised to find a chrome Low Rider bicycle hanging up-side down from the ceiling when I first walked into the gallery. It’s was certainly an eye-catcher. 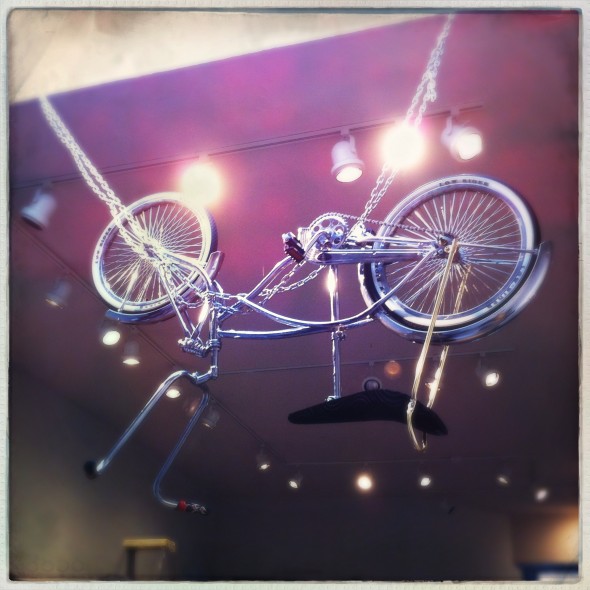 Yes, I used Hipstamatic to snap this pic. Narciso doesn’t like to get too detailed about his methods; I noticed in conversation is hesitant to name his art suppliers, and I get that.Â  But I’m a little different. I will tell you this was done with a custom setting I named “Loftbusta.” I felt it was appropriate for this lofty Low Rider .

As I walked around the space, I noticed ArgÃ¼elles had a wall dedicated to sticker bomb art, with additional space designated for gallery visitors to add their own sticker bombs throughout the installation’s month long residency. On the opposite wall there were framed pen and ink drawings. There’s also a neon light installation going in, but since he was still assembling it the evening I visited it will be a surprise to see what it looks like once it is completed. ArgÃ¼elles also told me he’ll have a vinyl sheet with some graffiti-style art hanging on another one of the gallery’s walls.

If you’re like me, you’re probably curious as to how far $500 will take you. Not very far, says Narciso. He’s recycled a lot of older projects, but he’s spent money out of pocket too. Fortunately he’s got teaching job, but it isn’t about the money for him as much as the process of bringing a project like this to fruition.

I asked ArgÃ¼elles to explain the impetus behind his desire to do this project. This is what he had to say:

“An urban artistâ€™s media can include paint, spray paint, stickers, markers, paper, wood and fabric. Surfaces may include walls, billboards, and windows. Art on walls has a long tradition in the Mexican culture that I belong to. From Aztec murals, to the murals of Diego Rivera, and to the Chicano murals of the 1960â€™s, there is a rich history of art on walls. For me this is my culture. This is not Street Art.”

You can catch the full experience this Friday and through the whole month of August. There will also be an artist talk with Narciso so stay tuned for details about that date, time, and location.