Burlesque is an art form still happening under the radar in Oklahoma. Even in liberalish cities, such as Norman, venues are not allowed to host a show as it is considered “stripping,” (golly!), therefore it’s not allowed in establishments within city limits. Although there is one establishment that has been grandfathered in, so it continues to offer a steady supply of strippers.Â  Regardless of the ordinances, I know burlesque happens in Norman because I’ve been invited regularly to friends’ private shows.

The main difference between stripping and burlesque is that one is more about theater and being sex positive, while the other tends to feel seedy and exploitative. This isn’t to say there aren’t enthusiastically joyful pole dancers out there, but you typically don’t find them in high concentrations here in Oklahoma. I guess it’s revealing to admit I’ve seen more Oklahoma burlesque performances than strip shows. This is because I find the latter typically lacks humor and creativity. And if you go by the billboards on the highway, it seems the dominate mode of sexuality in these parts not only lacks a cheeky sense of humor, but it is reductive and, to me at least, not that titillating.

Thankfully there is an alternative and 2013 marks the first time it’s become a festival. Since burlesque isn’t really about the explicit limberness of a dancer on the pole, and more about the inventiveness of a theatrical act, it can vary greatly between performers. There’s costuming and narrative at work. Song choice, props, and routine are developed in such a way so that it advances the narrative. And while “words” aren’t being used directly between the performer and the audience, visual puns are certainly at play.

With that in mind, I’ll be writing about a few of the notable performances from this year’s festival which was held at Oklahoma Contemporary Theatre in Oklahoma City. While I did not go both nights, I did attend Saturday, which is the same evening awards were given to those performers who stood out in various categories over the course of the two days. I mention this because two performers on Friday won awards for sets I didn’t see. And as it turns out Red Rum, who I missed, had been awarded a Bedazzled Buffalo for being the Most Original act that weekend. Her costume was based on The Twilight Zone episode “Nightmare at 20,000 Feet.” She was the gremlin. I hear it was awesome. 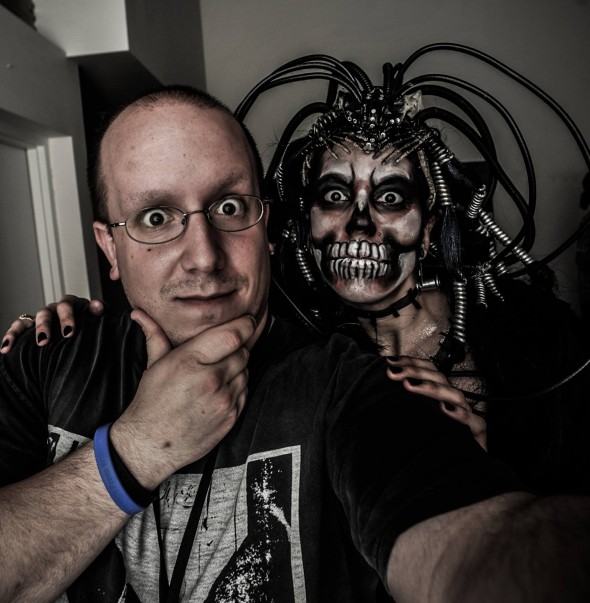 Doug Schwarz was the official photographer for the event. Here he is with Red Rum on Friday night. Photo credit: Doug Schwarz Photography

Alright, Goldie Goldstien emceed Saturday night’s show. The first act saw her in a sequined gold wig as she explained to the audience the rules of burlesque. Typically you’re not allowed to photograph the sets unless you’ve gotten special permission. Which isn’t to say that I didn’t see the occasional audience member taking a photo on the sly, but since Goldie didn’t make good on her threat to have all the phones, set on vibrate of course, confiscated and placed in her panties, this is probably to be expected. Even though I had special permission to take photos, I decided in advance that I would honor the rule about not photographing the “full pastie-twirling reveal.”

All said, the audience was packed Saturday night. There might have been a chair or two empty, but for the most part both act one and two were well-attended. After intermission Goldie returned to the stage bedecked in a corset accented by sheer fabrics and sporting a blue wig. Between sets jokes and singing ensued, and while there was an unexpected delay at one point, Goldie handled it pretty well. This was accomplished by finding an audience member who wanted his birthday spanking. 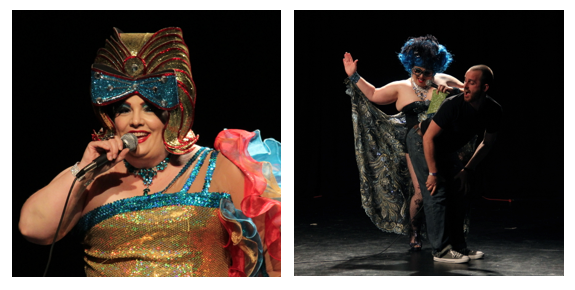 The birthday boy was really into it.Â  Since this is about the art of the tease, Goldie’s hand hovered until the much anticipated blow was delivered. And since turnabout is fair play, the emcee receive a generous pat on the rear for a job well done.

When I interviewed festival organizer Adele Wolf this past week, I discovered a fair number of performers were from out of state. Bianca Boom Boom from Toronto caught my attention with herÂ raucous Alice in Wonderland-themed act. You see, the Queen of Hearts finds an invitation to eat magical jam, as she licks the spoon, she discovers the more she licks the more it all becomes too hot to handle. Where does the “boom boom” fit in? Oh, about the time the bass line to Queen’s “Another One Bites the Dust” starts thumping. Naturally her act ended with not only the big reveal, but with a dusting of red glitter that was blown from her mouth. 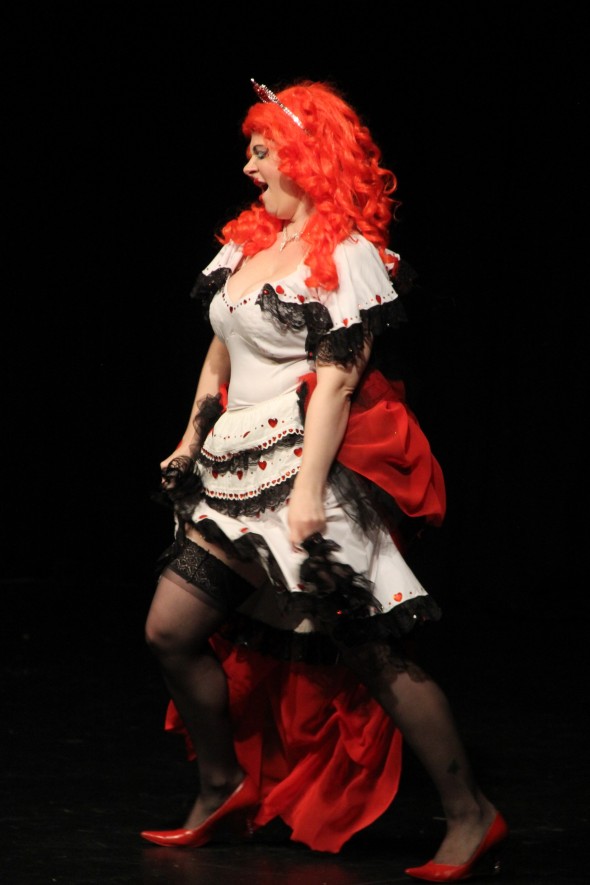 Bianca Boom Boom will rock you.

I was pretty amused with the majority of performances. I also appreciated how the line up alternated between fast and slow jams. For instance, Yvette D’Sin, from Kansas City, MO, used Julie London’s “Go Slow” during a sensual dress down, but there was also a songstress in the line up too. Lyric Laveau, from Dallas, wooed the audience with Ella Fitzgerald’s “Too Darn Hot.” My favorite part of Laveau’s routine, besides the fact that her song choice name checks Alfred Kinsey, was that her big reveal was a tease in every sense of the word. At one point you think she’s undoing her top for the big finale, but alas, it’s as the song says, “It’s too darn hot,” so a red fan pops out from behind her back instead. 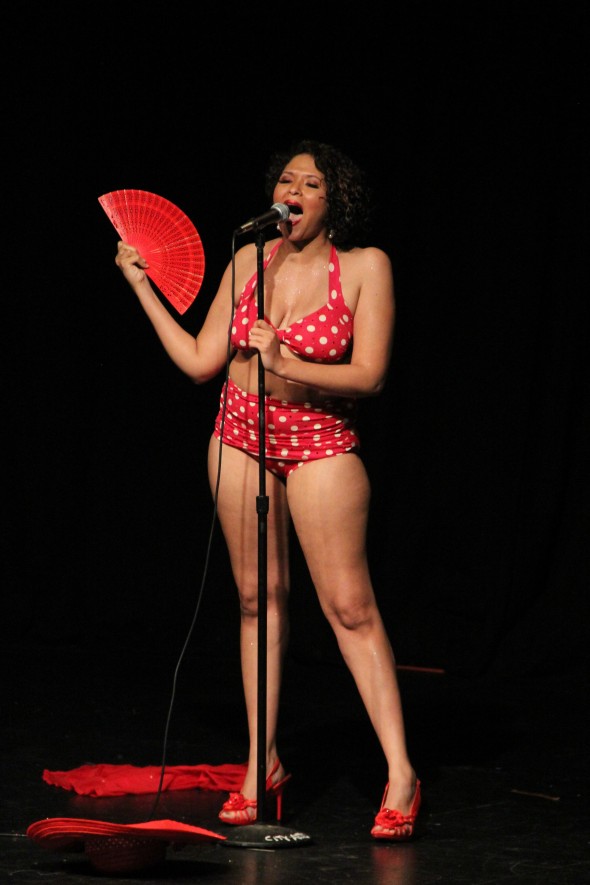 Oklahomans, I’m sure can relate to the sizzling sentiment.

Another favorite that evening was Dangerrr Doll (NYC), who’s song I can’t even remember now, but what I do remember is her charged attitude and the teasing game of peak-boob she played with the help of her folding umbrella. I think what I enjoyed most about her performance was that she was totally into what she was doing, a quirk of the lips and sly look, reveling with delight as each was button popped, there’s a reason she won an award at the Oklahoma City Burlesque Festival. Turns out she had the Best Costume. 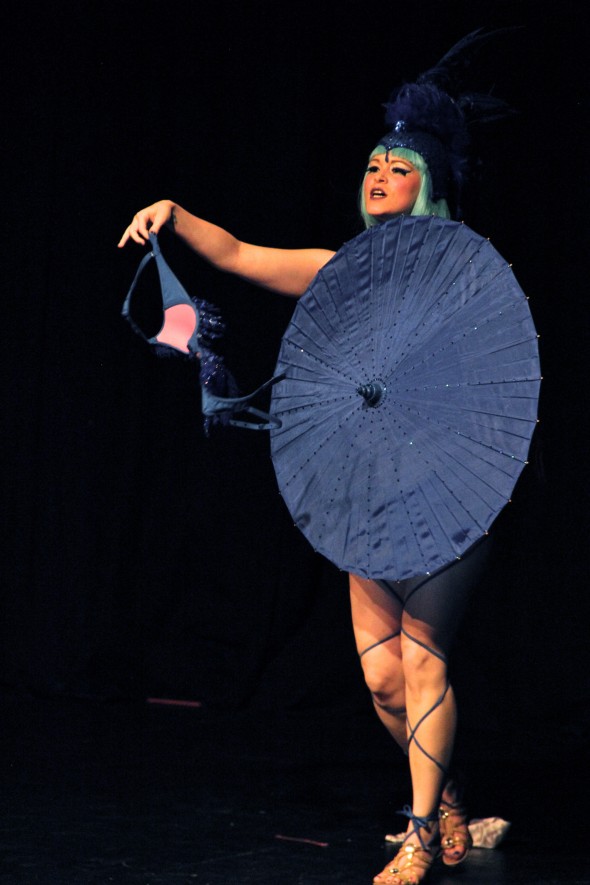 There were Oklahoman performers that evening too, but Adele WolfÂ  caught my attention as she paid homage to her native heritage pretty cleverly. From behind a white round screen that had been back lit, think something in the way of a full moon complete with a lone silhouette, emerged a sultry wolf. Wolves are actually shy animals by nature, so there were several retreats made to the white screen. Eventually, though, the predator emerged. 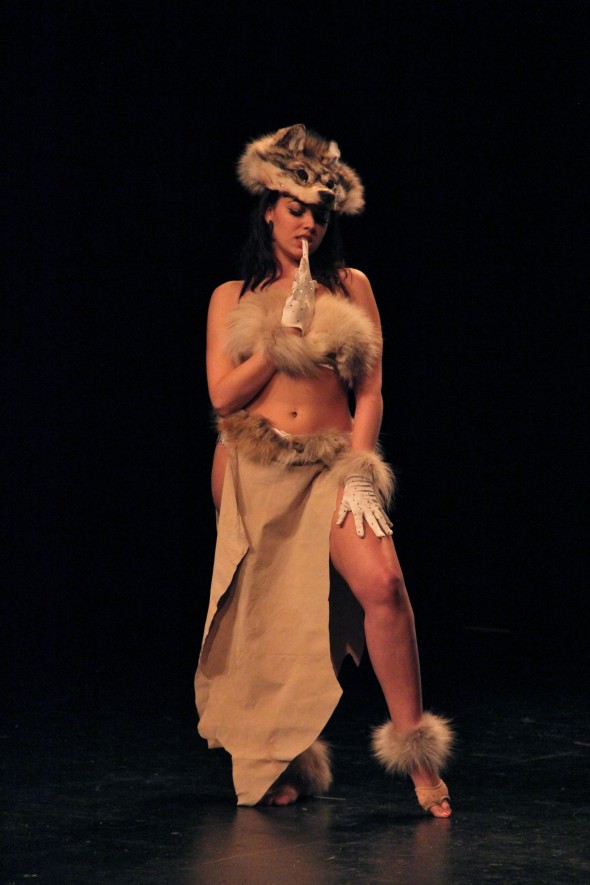 Bazuka Joe, from Chicago, was one of the headliners on Saturday night. Not only was he the only guy in the line up, but his version of Speed Racer shifted gears right into “Greased Lightning.” Needless to say, it was quite the finish when he got down to waving the checkered flag. 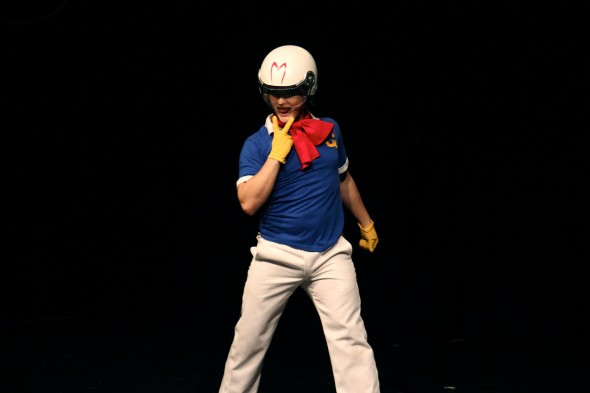 I don’t remember that move in the title sequence to Speed Racer. There were other moves, pistons, one might say, were definitely pumping.

The last act of the night was performed by Mosh, from LA, who used a bamboo prop to sit and slip around on. Her entire performance was reminiscent of an old school Hollywood film, like King Kong or some other Island jungle tale. 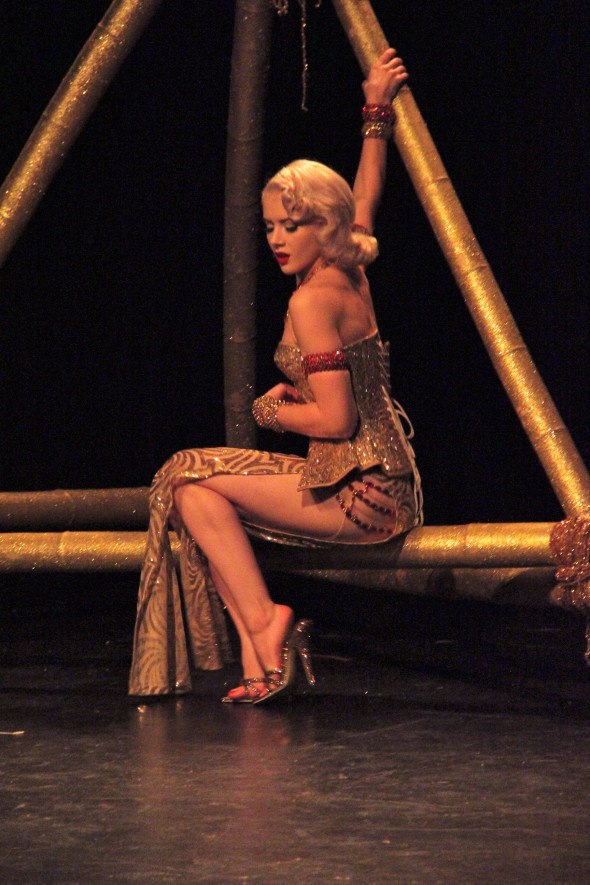 As I mentioned golden buffaloes were handed out for specific categories. They went to performers for acts that took place either on Friday or Saturday. I didn’t see who the panel of judges were, but after the last act wrapped, the awards and announcements started. The winners of the Bedazzled Buffalo Award were:

Overall I enjoyed Oklahoma City’s first Burlesque Festival. The vendors were tucked away in a back room, so it was almost too easy to overlook them if you didn’t know they were there, but this did not stop me from getting a little feathered-hair barrette from Incorrigible Dames (TX) and a curiously eccentric ring from Amelie’s Anomalies (OK). Even so, if the success of the weekend is any indicator, I expect next year’s event will be bigger and more varied. Honestly, it’s pretty heartening to see a more empowering form of sex positive art take root in Oklahoma. If you’d like to see more photos check OKC.NET’s Flickr. 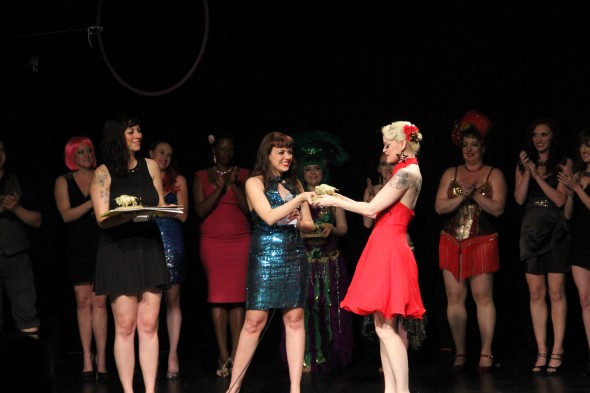