I don’t know about the rest of you, but for the past month I haven’t exactly felt like rainbows are shooting out of my eyes and that everywhere I turn there’s a faint glow of sunshine sparkles glimmering through cotton candy clouds. In fairness it could be because I live in Moore. So to perk myself up I’ve been hitting the Interwebz in search of the ridiculously awesome. And there is nothing quite as ridiculous as art inspired by pop culture.

Now when you combine pop culture with arts and crafts sometimes what you get is either something that belongs on a website like the now defunct blog Regretsy or some other site dedicated to well-meaning, but total craft fails, like Pintrosity (which is where Pinterest crafts go to die).Â  Rather than trashing trash, I decided true pleasure can be found when you find something to enjoy that knows it’s better than bad, it’s good! If you didn’t just hum in your head that Ren and Stimpy log jingle, then you weren’t a 90s kid.

So where does one cruise for some fine ass crafty kitsch? Um, on the corner of capitalism and cottage industry, duh. Which is where you can pick a fine piece, if you know what I mean.

And what better website to pimp such awesomeness than Etsy.

Behold our first example: this Game of Thrones Tyrion Lannister tee. To say this imp has a little thing for whores would be a huge understatement. 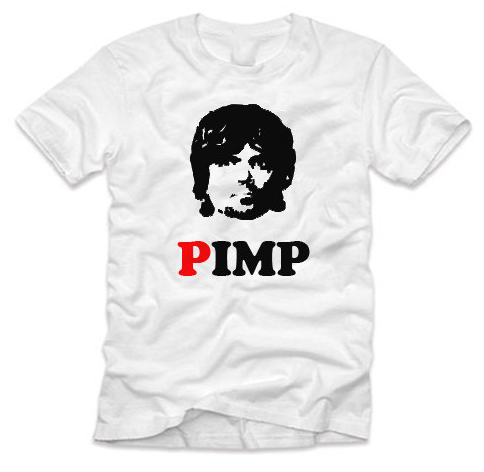 Notice how they tastefully chose not to go with that ever popular phrase “Big Pimpin’.” Just think, for $14.46 plus S/H you could be the smoothest mac daddy this side of Westeros at your next GoT watch party.

If you’re going to hold a watch party, then you’re going to need invitations. And if you’re not looking to make a subtle point about the importance of attendance, then you can get this print via Knerd Kraft.Â  It’s an instant PDF download, so just pay the nice man his money, all $4.50 of it, and remember what the Lannisters always say. 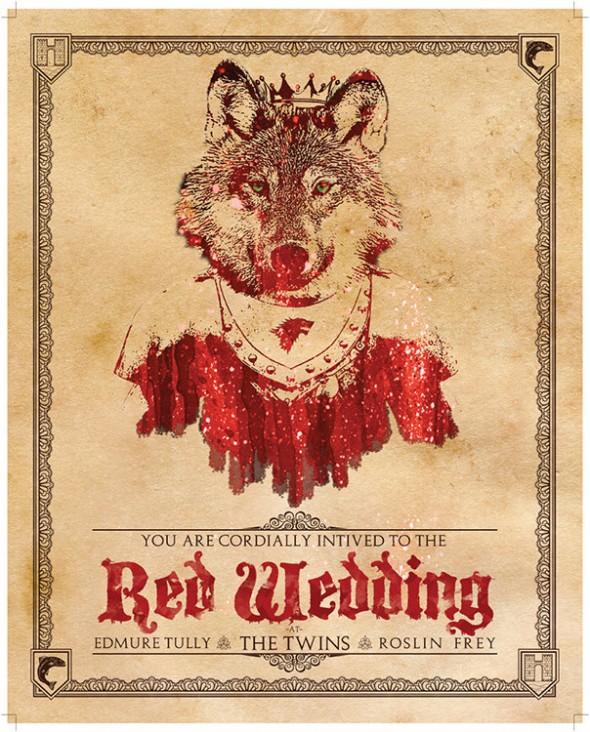 Just think there are so many ways this could have gone wrong in the hands of a lesser artisan. Believe me, I’ve seen too many examples (cough, eBay, cough), but I find this one to be well-executed.

Like many a person I’ve seen at the local RenFair, you only wish you could travel to Westeros and Essos. So in the spirit of fantasy land travel, here are these lovely early-1900s travel poster inspired prints via TeacupPiranah. This set of 5 is going for $48.34, not including S/H. 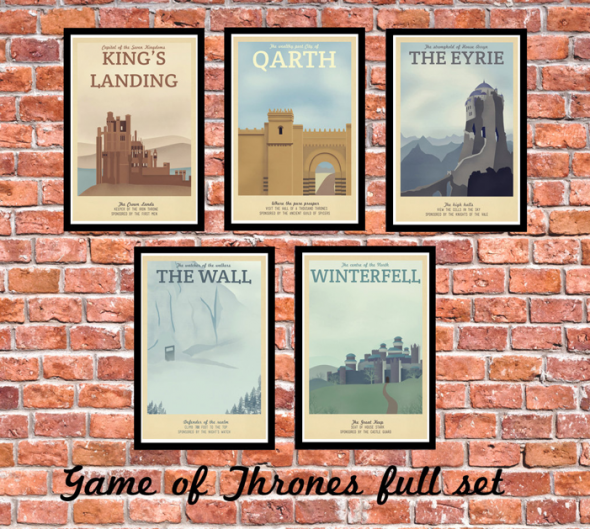 You know with all this George R.R. Martin fandom shiz, and the speculation about him finishing the last two books before the HBO show catches up to book 5, reminds me of something else that has stalled for quite some time. It also involves not only rich people problems, but flirts shamelessly with incestuous family relations too.Â  The next round of ridiculously awesome pop art goes to Arrested Development. Which I’m not going to lie, I binge watched all of Season 4 the day it became available on NetFlix Instant. Did we make “There’s Always Money in the Banana Stand Muffins”? Yes. Yes we did. Sufficed to say we hid a generous dollop of Nutella in the muffins and concealed the evidence of that little deposit with a finely-sliced sliver of banana. But that’s a post for another time.

Alright for some the ability to paint a portrait hasn’t advanced beyond Kindergarten. Speaking of things that are often cockeyed, take a look at Kitty! If you’re a fan of the show, then you’ll know what happens to Kitty’s eyes when she takes off her glasses. Alas, you won’t be getting the original painting as this is a print from FeatherStonePortraits. It’s going for $45.00, not including S/H. 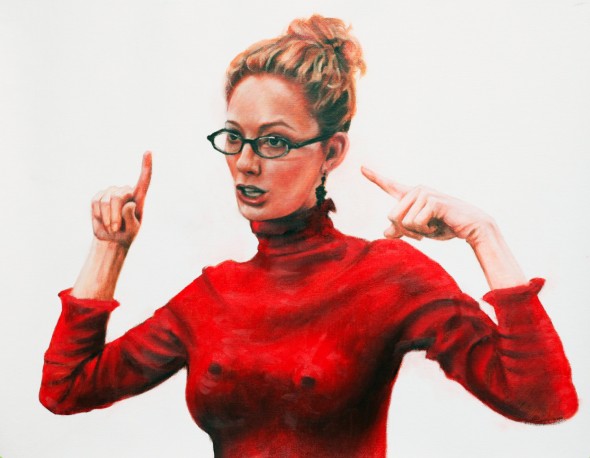 I’ve always wondered if the reason she was named Kitty is that she’s George Sr.’s mistress. Because as we discovered in the show, “pussy” is only censored with a bleep when it is not being used to as a term of endearment, i.e. “He’s as sweet as pussy cat.” or “Michael, you’re such a big pussy.”

Also in line with a little word play, and in regards to a character who’s not that into pussy, comes this wonderful poster from Bantergreetings. TobiasÂ FÃ¼nke tends to say whatever is on his mind, but his phrasing, well…yeah…just take a look below. 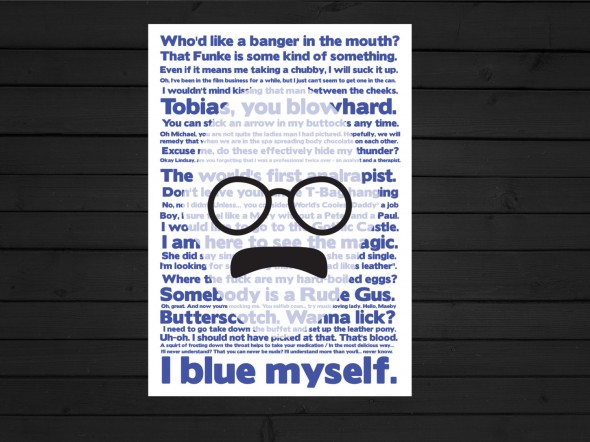 I particularly like his license plate in Season 4 “ANUSTART,” which, wouldn’t you know, also can be found on Esty. You can also find metal stamped trinkets that read: “It’s pronounced a-NAL-rapist.”

Other things that blow, smoke that is, is this art print of Gob (pronounced: Job) Bluth from CastlepÃ¶p. It’s going for $20, not including S/H. Here’s the deal. This gets points from me for several artfully intertwined facts. Fact 1: If you’ve watched the show and see this print, there’s a good chance you’re going to get Europe’s “Final Countdown” stuck in your head as that’s Gob’s theme song for his magic routine. Fact 2: This print is also inspired by Alphonse Mucha’s Job cigarette ad. Fact 3: Alphonse Mucha was a European, see Fact 1. 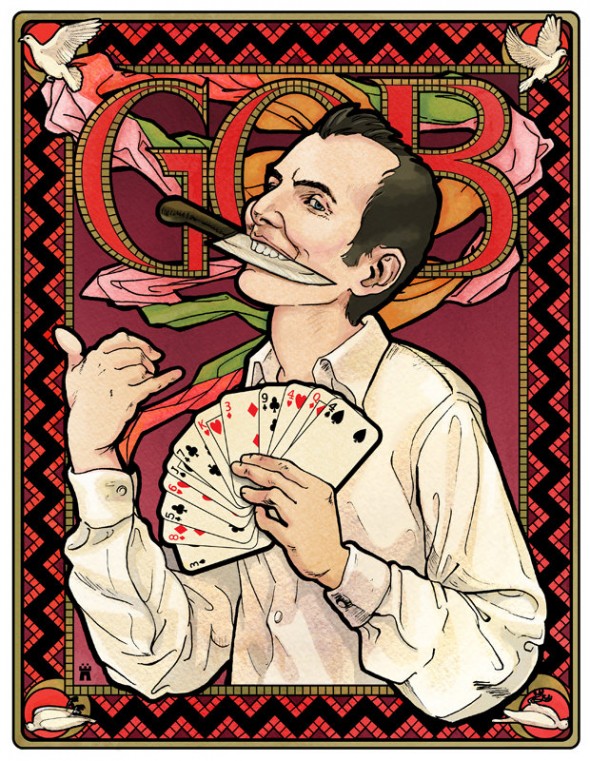 “Illusions, Michael. Tricks are something whores do for money…”

Since I sort of referenced music with the inclusion of Europe’s “Final Countdown,” and this list could go and on (especially if I allow myself to go on a Wes Anderson kick), I’m going to end with a few of my favorite things. How many things is that? Like 5.

5. “…when I’m feeling sad, I simply remember my favorite things and then I don’t feel so bad.” – Sound of Music, also set in Europe. Boom! So if you need to examine your attitude and then adjust your perspective, there is a print from ThePressingPigeon on special. It’s going for 2 for 1 at $8.99 not including S/H. So if one of your favorite things is gifting sentimental pop art, you’re in luck! 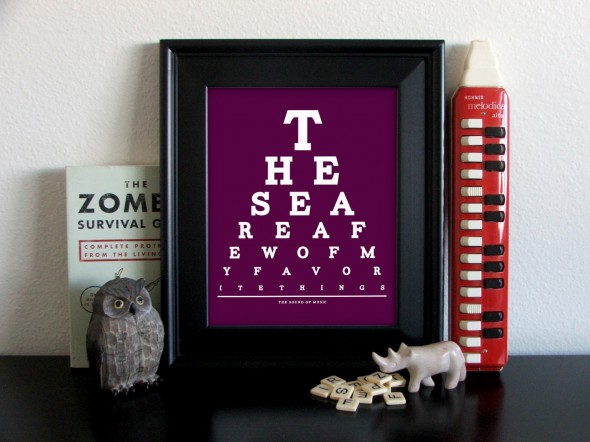 I also happen to like owls, scrabble, zombies, and melodicas. Rhinos are o.k., I guess.

4.Â  Since the preceding pop art had purple in it and it dealt with eyeballs and feeling sad, it reminded me of this watercolor print from sleepybowie. Seeing as there are few artists out there who could rival the ridiculousness of Prince in whatever incarnation, and no Garth Brooks as Chris Gains does not count, this version of His Royal Purpleness costs $30, not including S/H. “Dig if you will the picture…” 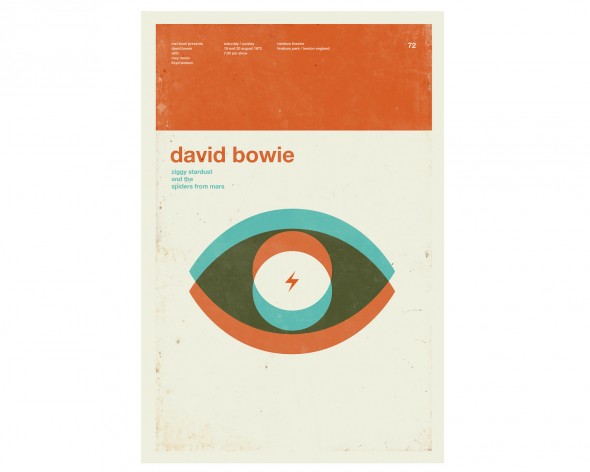 David Bowie, how I love thee. Let me count the ways: 1. This clearly references Ziggy Stardust. 2. Bowie’s eyes are trippy in real life, not because they are two different colors, but because an accident causes one pupil to remain dilated, and 3. 1972 is the year the album came out.

2. It was tough not to go with another blatant David Bowie pop art reference, try as I might. In searching for an obscure way to wink and nod back to Bowie, I discovered a horrible oversight within the arts and crafts community. Honestly, I could not find an Etsy listing for a Seu Jorge print. He is the link between Wes Anderson’s “The Life Aquatic with Steve Zissou” and Bowie’s songs. How no one has doodled an adorable version of him in a trademark team Zissou red knit cap as he strums a guitar aboard ship is beyond me. So, I had to think about what I could go with instead.

So sort of in line with the “Rise and Fall of Ziggy Stardust and the Spiders from Mars” is “Moon Rise Kingdom.” For starts, there’s the vinyl connection and music is pretty prominent in the film. This decorative vinyl record is from AceTroy. It’s selling for $30, not including S/H. 1.Â  Maybe it’s because there’s a boat in more than a few of these TV, film, and musical references, and the fact we started this Pop Art journey with pimpin’ of a sort, but as it turns out Jay-Z is on Etsy as well.

First reaction in a word: “subversive.”

Full explanation: I saw this print and thought it could be at a Pottery Barn, Target, or maybe at Garden Ridge. Its innocuous enough that I’m pretty sure your Granny wouldn’t really get it, is all I’m saying. This “Big Pimpin'” print is from LyricalArtworks and costs $19.95, not including S/H. 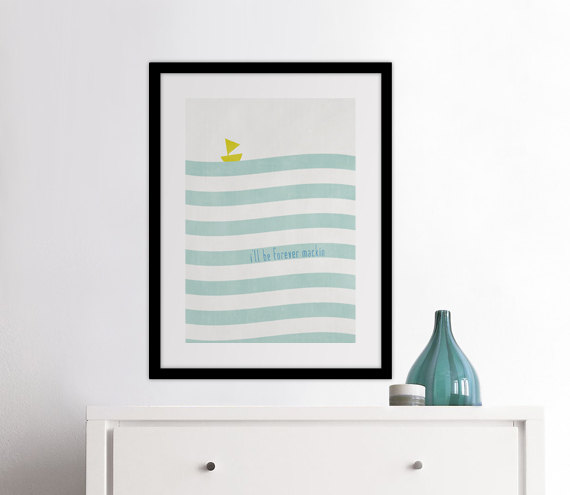 Like party boats, framing and matting is where you’ll be spendin’ Gs.