I love documentaries, I love progress, and I love it when people seize the opportunity to become genuine stakeholders in their own lives. So it is only natural the short documentary “This is Normal” caught my eye in the list of “Okies in Your Corner” shorts. This is not to say the others lacked these qualities, I’m really looking forward to watching all of them to be honest, but “This is Normal” reminded me of another film that screened at deadCENTER earlier this week called “The Cherokee Word for Water.” It is about Wilma Mankiller and full-blood Cherokee organizer Charlie Soap. The two join forces to battle opposition and build a 16-mile waterline system using a community of volunteers. In the process, they inspire the townspeople to trust each other, to trust their way of thinking, and to spark a reawakening of the universal indigenous values of reciprocity and interconnectedness.

But beyond the issue of access to clean water, the other similar element between these two films is that it focuses on Oklahomans who are taking ideals akin to the “reawakening of the universal indigenous values of reciprocity and interconnectedness,” and applying them elsewhere in the world. Where the two films differ, other than “The Cherokee Word for Water” is feature length and not a documentary, is also in location. “This is Normal” focuses on Africa.

I had the opportunity to preview “This is Normal,” and I was happy to see this isn’t a film that lionizes the efforts of foreigners and reinforces the troublesome savior complex, one that doesn’t empower indigenous peoples, and which is seen in some interventionist stories set in Africa. The key players in this documentary are Water 4, a non-profit based in Oklahoma City and founded by Dick Greenly, and the people Water 4 interacts with, chiefly a well digger from Samfya, Zambia Jimmy Kamfwa and Petronella, a mother of eight who lives on M’bala island in the middle of Lake Bangweulu, also in Zambia. Director and cinematographer Derek Watson films with a powerful aesthetic that focuses more on humanity than the stark reality of the situation. And in doing so, it is the beauty of the human spirit and focus on interconnectedness that is most often touched upon in the rural scenes of daily life in Zambia.

I was so taken by this film, I felt compelled to interview the director. Keep in mind, however, it screens with a number of other short documentaries about Oklahomans changing the world. So if you’re not a pass holder, you’ll pay $10 to see all of them in one block.

THIS IS NORMAL
Run time: 22 min and screens with â€œOkies in Your Corner Shortsâ€
Playing at 6:30 p.m. on Saturday at Harkins theater
Non-pass holders: $10 per ticket.

OKC.NET: How did you find this story or did someone reach out to you about efforts to install water wells?

Derek Watson: I’ve been really fortunate to have the opportunity to work on several projects in the developing world, from Central America, Africa, the Middle East, and southeast Asia and I would see the same thing everywhere I went: women and children walking long distances to collect water that was slowly killing them. It seemed so normal to these people. They either had no idea that there was another option or there was absolutely no other option afforded to them and they knew their drinking water was making them sick, which I think is worse to be honest with you!

OKC.NET:Â Do you remember what your first reaction when you learned of the death tolls caused by poor drinking water?

Derek Watson: I was appalled, as I’m sure most are, by realities of the water crisis. What’s incredible is that this is shockingly normal for a large portion of the world’s population and it has been since the dawn of time. Moreover, we don’t have to go that far even in our history here in Oklahoma for those numbers to be felt. As early as 100 years ago Oklahomans were losing their children in the same way to the water they drank. So obviously there is hope for a solution and I think this film points to one of those potential solutions. 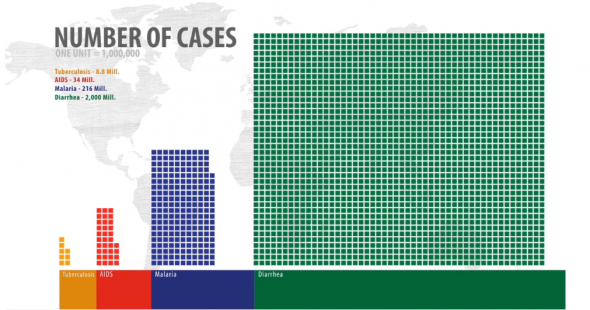 Diarrhea diseases kill more than Aids, Malaria, and Tuberculosis combined. Image via “This is Normal.”

OKC.NET:Â How long did it take to shoot and edit this documentary?

Derek Watson: We began research and preproduction in September of 2011. Our first shoot in Zambia was in January of 2012 and took 3 weeks in the remote village of M’bala. We went back in May of 2011 to follow up on the story and were through with our final cut in September of 2012.

OKC.NET: Who all helped to finance this film, or did you have to pay for the majority of the costs yourself?

Derek Watson: Financing was made possible through the support from generous donors through Water4.

OKC.NET: Have you kept in touch with any of the people featured in this film?

Derek Watson: Yes! We have heard from our drill team who we follow and they have drilled or rehabbed 79 wells. Over 8,000 people have gained access to clean water through their work. The village that is featured in the doc now has 6 wells and all of the villagers, who say “now our health is improved. Before we had stomach problems and diarrhea but now no more,” want at least 2 more wells.

OKC.NET:Â This is a short documentary, was it a hard call to decide which shots would make it into the final edit?

Derek Watson: Absolutely! There are some great scenes left on the cutting room floor. It’s painful to cut those scenes that you and your team have worked so hard to capture, but I hope the result is a succinct and powerful story. It’s incredibly difficult to make those decisions for the betterment of the entire film.

OKC.NET:Â Were there any scenes you wish could have made it in, but overall just didn’t fit? If so, can you recall a story for one specific scene?

Derek Watson: One specific scene is of one of our subjects, Water4 founder Richard “Dick” Greenly, who tells the story of his wife’s great-grandmother Luella Zachery who received a track of land from the land run. Dick succinctly describes how Oklahoma 100 years ago was not that different from current day Africa and Oklahoma conquered the water crisis in 50 years. It was quite touching and as an Okie hit close to home.

I also don’t know if anyone could capture how hard our subject, Petronella works. We followed her non-stop for almost 2 weeks and she is the hardest working person I have ever met. Her life is incredibly hard, but the strength in which she approaches her challenges is nothing short of inspiring. We have hours and hours of scenes of her in the field, cooking over a hot stove, grinding cassava by hand, and cutting firewood and the list goes on and on. There are no breaks, no vacations, no weekends for her, because if she stops her children will not survive and collecting water was taking up most of her time.

OKC.NET:Â In retrospect, did you have any preconceptions about the drinking water issue and level of hardship associated with it that were dispelled the more you learned about the subject and the human cost?

Derek Watson: To be honest, I wasn’t expecting the radical change that we saw when we went back to the M’bala 4 months later. Call it cynicism, but I truly wasn’t prepared for the drastic life-change of these people.

We’ve all heard the phrase “water is life” and it is kind of flippant for us. Even here in Oklahoma when we go through drought, for most of us it doesn’t really effect us besides not being able to water our lawn or go to the lake. But for most in the world, a lion’s share of their day is spent simply collecting water, walking hours to dirty sources. It’s hard to fathom that until you live that life for several weeks.

OKC.NET:Â I’m impressed with the level of visual aesthetic in the establishing shots of Petronella and her family, as well as other people featured, they’re beautiful and some scenes feel as intimate as looking through an album of family portraits. Do you feel despite the hardship these people face that there is a kind of rustic beauty to their way of life? 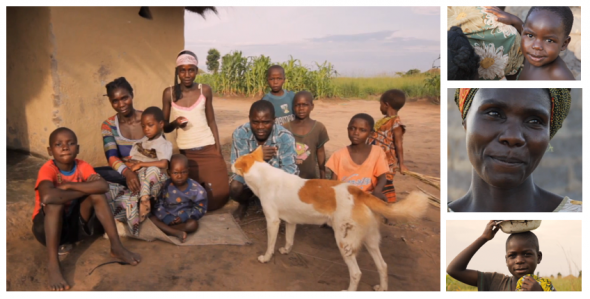 Petronella and her family.

Derek Watson: Thank you for the complement! I really wanted the beauty and strength of these people and their homeland to be felt through the film. I didn’t want this to be another “Africa film” where all we see is the harshness of the continent. This is a story of hope and we wanted the beauty of our subjects to come through aesthetically. The brilliance of the Water4 model is that it empowers those in the developing world to help themselves. They are truly capable, bright, hard-working people, they just need a little bit of assistance. I hope that the film captures that through the cinematography and the content.

OKC.NET:Â Is there anything I haven’t asked that you feel is important for readers and potential viewers to know about the documentary or any of the people featured in it?

Derek Watson: As an Oklahoma Filmmaker, I’m incredibly honored and grateful to deadCENTER for giving us a venue to screen this film in our home state. This is a story of a handful of Oklahomans changing the world and it’s thrilling to get the introduce the story to an Oklahoma audience.