Rick Sinnett has reached the Kickstarter goal. And from the spectator standpoint it’s been amazing to watch support for the Silo Art Project take off like a whirlwind. “This Land,” the title of the mural, will be the largest project Sinnett has ever worked on, and to-date will be the tallest of its kind in Oklahoma. The grain silo it is to be painted on measures 100 ft by 128 ft. The “wow” factor is sure to be impressive once it is completed. 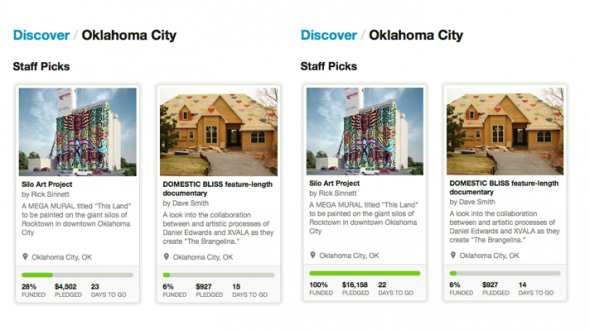 The Silo Art Project has picked up so much momentum in just a few short hours. The screen shot on the left was taken at 9:00 am on May 9th when it was announced by Sinnett that the Kickstarter Staff picked it as a top project to back. The screen shot on the right was taken at 11:00 p.m. May 9th. The project reached its financial goal via a generous donation from Downtown OKC, Inc.

Sinnett posted the following press release on his Facebook page:

Downtown Oklahoma City, Inc., made a $10,000 donation to the Silo Art Project this afternoon to complete the fundraising for a giant mural to be painted on the Rocktown Climbing Gym.

Jane Jenkins, Downtown OKCâ€™s president and CEO, said, â€œWeâ€™ve been saving money in our Initiatives fund for multiple years, waiting for a project like this to come along. We all love this mural and its symbolism, and of course, are proud to help fund anything that improves the downtown community.â€

Downtown OKC called Sinnett to inform him about the donation and he said, â€œWow. I canâ€™t tell you how grateful I am. This is one of the reasons I love this state. Everyone is willing to help each other out and have really stepped up to support public art. This is such a blessing.â€ Downtown OKC has also offered to pay for the necessary permits needed to install the art and to help with that process.

The mural will be painted on an old grain silo on SE 4th Street which is now Rocktown Climbing Gym. The location is visible from the Oklahoma River and Interstate 40. â€œItâ€™s a prime area to showcase some high-quality and meaningful art, as well as beautify the skyline,â€ said Jill DeLozier, Downtown OKCâ€™s marketing director.

Downtown OKC will make its contribution to the project through its 501(c)(3), Downtown Oklahoma City Initiatives.”

Naturally I was curious as to what comes next so I fired off a few quick questions about the surge of public support, the donation, and how Sinnett will have to proceed.

okc.net: Did you expect the momentum to build so quickly?

Sinnett: I could tell that momentum was building, but I certainly didn’t expect this. It’s still going.

okc.net: Yeah, a few minutes ago I noticed the Kickstarter page listed 76 backers. I just checked and now there are 100 backers total. Did you have any inkingly that Downtown Oklahoma City, Inc. was interested in funding this project at all?

Sinnett: I had no clue that Downtown OKC, Inc was interested.

okc.net: Will you still post progress updates via Kickstarter for people to watch this mural come to fruition?

Sinnett: Yes! I will still stay very active with updates and posting. We still have 23 days to go.

True to his word, the most recent update was posted very early morning on May 1oth via the Silo Art Project Kickstarter page:

“We can officially announce this evening that the SILO ART PROJECT has reached it’s funding target today!!! It is an amazing feeling to know that you all believe and support this project so much.

A very special thank you to Downtown OKC, Inc. who contributed $10,000 today and made it possible for us to reach our goal in just a matter of days. We still have 22 days remaining on the Kickstarter campaign!

That said, there’s still all these Rewards for those who wish to participate to this ongoing campaign. We even have one more massive mural for anyone else out there who might be interested in the $10K reward level!

We thank each and everyone one of you – from the $2 donation all the way up to the highest level – you all have made this project possible. There’s more updates to come…we’ll keep you posted.” 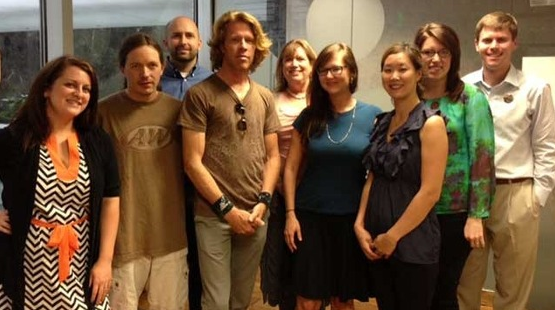 Oklahoma City residents and organizations like Downtown Oklahoma City, Inc. have spoken. The mural is a solid go. And Arcadia, Oklahoma, which is where Sinnett said any extra funds would be channeled to in the event of a surplus, is about to get some Pay It Forward-style momentum for their next public art mural too. At any rate, those Kickstarter backer reward incentives, like the postcards and signed fine art prints, are sure to become collectibles once the Silo Art Project fundraising campaign officially ends. If you haven’t backed it yet, you might consider it still. 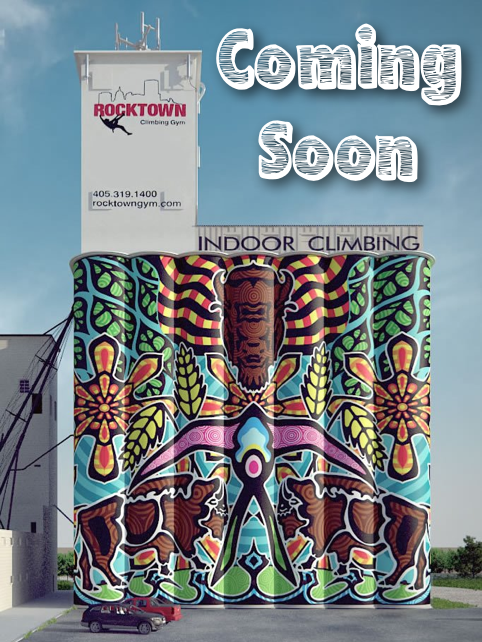