Today, on the 18th Anniversary of the Oklahoma City bombing, I decided it was time for fellow editor Colin Newman and I to visit the Oklahoma City National Memorial on the very day it had been marred by violence all those years ago.

We parked nearby and gave ourselves 45 minutes to absorb all that took place around us. For me this wasn’t about reconciling a loss, but more about taking in the magnitude of the day. Keep in mind, I did not grow up in Oklahoma. In 1995 I was living in Hawaii, another state with its own tragic history. Even though I’m as Hawaiian as I’m an Oklahoman, which is to say I’m not really either of those things, I feel like my life path has certainly been influenced by the nature of war and terrorism. My father’s military service both at home and abroad has allowed me to visit a number of memorials, former concentration camps, Holocaust museums, and mass grave sites the world over. And what I’ve learned, quite sadly, is that each of these places has the power to resonate decades after their horrors have been put to rest.

I’ve also learned that memorials at any other time of the year are not as potent as on the day of the event they commemorate. It’s not that they aren’t as big and beautiful and sad the other 364 days of the year, but what they lack is a sense of meaningful activity. It is the activity of the community that makes these monuments mean something more than the original event. As I watched various people congregate into groups, it made me wonder who they’d come to remember.

As someone who doesn’t really have a true sense of place, for me the stories that have the most potency are those of the individuals effected by events. Give me a person to connect with, not a timeline or historical marker. Facts are cold, but empathy is warm. A chair any other day of the year is an empty reminder, but a chair with handful of change is another thing all together. 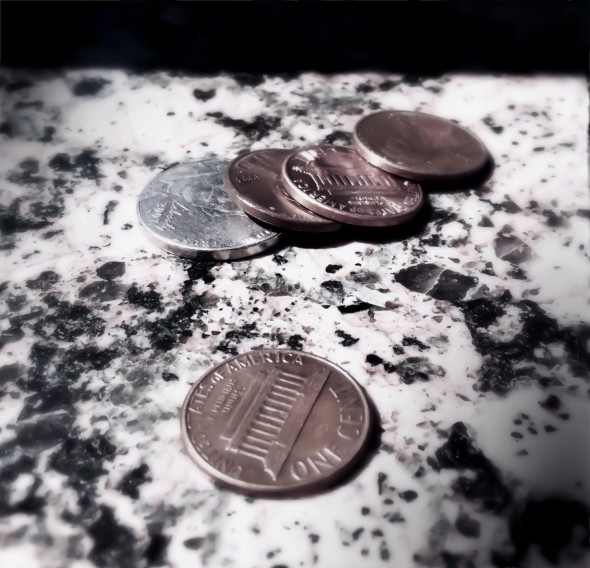 Retired Oklahoma City Police Chaplin Jack Poe took a moment to tell me why he placed a penny on Thomas Lynn Hawthorne’s chair.

By-passing the news cameras and people weaving in and out of the crowd, my eye had been drawn to a solitary man who approached a chair. He’d worn a black leather jacket this brisk April morning. With his eyes fixed on Thomas Lynn Hawthorne’s monument, I saw him reach into his pocket, regard thoughtfully for a moment what was in his hand, and then place a penny on the cold marble. I was intrigued. All the chairs were decorated. All of them had flowers, no doubt a service provided by volunteers, but others had been adorn with sashes, pictures, teddy bears, and the like.

Yet this chair, in addition to its solitary yellow rose, also held a little mound of loose pocket change. I’m not really sure what prompted me to approach this man and ask him the meaning behind the gesture. Maybe some free-word association latched onto the idea of “change,” but whatever the case, the idea of transformation on this day in particular was not lost on me.

I introduced myself, and in turn Jack Poe told me not only about himself, but about the life of Thomas Lynn Hawthorne. Poe said Hawthorne had been on the first floor assisting a friend from the United Rubber Workers Union who needed help getting benefits from the Social Security Administration. It was Thomas’ mother, Betty Hawthorne, who explained to Poe the significance of remembering her son with pennies and loose change.

Poe, now a retired Oklahoma City Police Chaplin, had been helping victims’ families with counseling services and seminars in the wake of the attack. He’d been assisting Betty in moving her luggage out of her hotel room after one of these seminars, when they’d discovered a single penny sitting on the threshold. Poe said Betty recounted for him the time she and Thomas had been walking home from Bricktown. She’d found a penny and went to pick it up, but Thomas told his mother to let it be. His rationale was that there’s nothing more exciting in life than being a kid who discovers loose change on the ground. As it turned out, Thomas told his mother that he would drop pennies and other coins purposefully if he spotted a group of kids nearby in the hope it would be discovered.Â  So at her son’s request, Betty left the penny where she and Thomas had found it. Poe said finding that stray penny on the threshold gave Betty a sense of peace. In a way it was a sign that Thomas would always be with her.

I asked Poe about the importance of sharing stories even all these years later and what he said made all the sense in the world to me.Â  Essentially Poe said that having place to share stories, no matter how painful it might be at first, gives people the opportunity to take all that emotion stored deep within and process it in a way that helps them transform grief into healing.