In the most unorthodox yet entertaining interview Iâ€™ve ever been a part of, DEERPEOPLE gave me the rundown for their show at Kampâ€™s this Friday which also features Jabee and Prettyboy (a.k.a. Jacob Abello). I didnâ€™t know what to expect before interviewing DEERPEOPLE band members Brennan Barnes, Alex Larrea, Jordan Bayhylle, Julian Shen, Derek Moore and Kendall Looney.

In retrospect, no expectations was the best way to go into it. Hoping to get the breakdown of their music and inspirations, I got that and more from the band. Including a few well-placed jokes from Jordan, Kendall who popped in to say hi then quickly disappeared, Brennan who declared the interview â€˜weird â€™ and suggested that we all meet at bar but then left the interview to head back to Stillwater, and Derek who was completely MIA, but peeking in on what we were talking about as Facebook has a way of telling on you when you’ve read a message. Nevertheless, the remaining band members answered the questions of a weary interviewer to the best of their abilities and light years above her nonexistent expectations.Â  Check out the very interesting interview below. 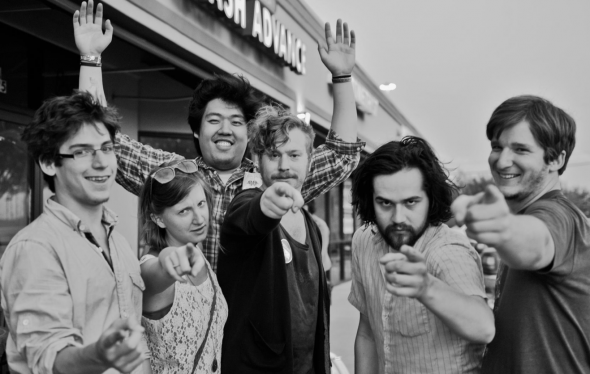 Okc.net: Â I saw on the FB event page that you haven’t played in OKC in a long time. What made you want to play here now?

Okc.net: What made you choose Kamps for your venue?

Alex: We’re always open to trying a new (new to us) venue out, especially close to home. Kamp’s has a good reputation and has been hosting shows for bands we admire. We found a mutual date that worked and that was that.

Okc.net: Is it true that you all decided to throw this show to help fund your new album?

Alex: We would be ready to play OKC again, forthcoming record or not. But, you could call it the reason to do any show at this point. We love performing, but free time for DEERPEOPLE is a sacred thing and has to be split to hell to make this work sometimes. We want the album out as soon as we can, but we are also funding it by ourselves. If we took six months off to knock out the record by using practice/performance time to record instead… we would go broke. Which is fine, because most of us go stir crazy if we aren’t out playing live.

Okc.net: Does the new album have a title or release date yet?

Alex: Neither. We could estimate a date, but it would only get pushed back or sound unreasonably far into the future.

Okc.net: Where do you all pull inspiration from for your music?

Alex: You’d have to get a separate answer from each of us. We all have different interpretations of what this band is and how we write. For myself, I draw inspiration from the other members of DEERPEOPLE (totally gonna get picked on BY THEM for this). We challenge each other in the best and worst ways. I think you can hear it in the music, and you can definitely experience it after spending time with us.

Julian: For myself, it’s all a means of expression. I can write parts for our songs, but the truth comes out in live performances. How you play a part changes and develops every single time you perform, and it’s definitely a two way communication with the audience.

Jordan: Inspiration can and probably does come from everything. At the risk of sounding like a complete and total d.b. I think I can safely say that.

Okc.net: How would you describe your sound? Or do you have a specific sound at all?

Alex: On my most objective and humble days, I still turn up thinking that we are truly unique. But, that’s a hard statement to really sell as lots of bands are unique to themselves and would readily say the same. Part of the beauty of offering your music up for free is that it can speak for us on our “sound”. So, hopefully no one takes offense when we say, “please just go listen to it.”

Julian: We are unique in our combination, but I definitely draw examples and direct references from others. But please just go listen to it.

Jordan: King of the Hill. Brennan watches a lot of it and heard the character John Redcorn say the word and thought it was funny. And since we’re all bad at naming stuff no one could come up with anything better. We hate names. I do, however, like the fact that the proper way to spell DEERPEOPLE is one word in all caps.

Okc.net: Â Why did you choose Prettyboy and Jabee to be a part of this show?

Okc.net: Will you all be having more shows in OKC after this one?

Jordan: We will play in Oklahoma City as long as people will have us. That being said, we don’t have anything scheduled at the moment.

Okc.net: What can I expect from the show on Friday?

Alex: You can expect to pay $7 for a diverse and active line up of original Oklahoma music. If you end up with confetti in your car and beer in your hair on your way home, that’s just a bonus.

Iâ€™d like to think that Iâ€™m skilled in the area of describing music, but after listening to DEERPEOPLEâ€™s two EPâ€™s, I canâ€™t find the words to describe it. Besides the fact that it is amazing music, you canâ€™t say that they sound like this or that other band. Their music is something all its own. They were very right to say that you simply have to listen.

DEERPEOPLE is playing this Friday at Kampâ€™s with Prettyboy and Jabee. Doors open at 9pm, cover is $7 and the show is 21 and up. Hope to see you there.

This song was posted by Kerry Amanda Myers on the Facebook event page. Myers calls it the “Sexiest song ever.” If the devil’s pulling at your strings, or as the song goes “It’s just the devil’s hold on me,” then yeah, you know what she means.