Have you ever read a book on drugs? â€œLow Down Death Right Easy,â€ a new novel from writer J. David Osbourne, is just that. It is a seedy, gripping tale of murder, deceit, the bond between brothers, and the decay of the rural-American dream. Does this give you any idea of what your in for? Good, now imagine Osborne stuffing that mixture into the business end of a pipe, tamping the lot down with the butt of a gas station lighter, and lighting the thing as readers inhale until it is cashed.

Osbourne paints a picture of what family means to most in rural American culture. His character, Arlo Clancy, just wants his younger brother Sepp to stay out of trouble. Sepp on the other hand gets caught up in a business venture with his junkie friend, Lucas, that might possibly put the both of them behind bars or in coffins. Both quickly discover that mo’ money definitely means mo’ problems. Hardly able to hold down a steady job as a cashier in the athletic section of a department store, Arlo wants to leave the life he is living behind and go somewhere he and his wife Jennifer can both be happy, somewhere exotic.

Another character, Danny Ames, is a security guard in a dive bar who moonlights as a gritty enforcer in the local drug trade. Danny just wants to find his missing brother Thomas before their doting mother becomes hysterical. Thomas, a good kid in his mother’s eyes, has been missing for a week before they go to the police. Even so, Arlo decides to take he investigation into his own hands. With the aid of his borderline sociopathic right hand Rafe, Arlo works his way through underlings, dealers, and the saltiest scum of the earth to find Thomas. Both Arlo and Danny are willing to accomplish their goals, but then you throw in a load of drugs, a rotting head in a fishing hole, and prose that seems like a heavy piece of oak that’s been whittled down by hard times and a coke-crusted razor blade.

Osbourne, at times, reflects blue-collar prose like that of Charles Bukowski, which is to say if Bukowski were geared up and looking for vengeance. Overall I found Osborne’s characters to be moderately developed. Much like when reading about Bukowski’s Henry Chinaski, readers get an honest look into each of the minds of Osborne’s characters, especially whilst toiling in the banal repetition of everyday life. As the book progresses, readers get to see characters escape from such banality, be it into art, drugs, or violence. Though I would say that there is no true protagonist in this book, save for the times the characters are facing down their own personal demons. Osbourne’s ability to maintain pace with the constant shift in viewpoint is admirable. I would even say that the book escalates at neck-breaking speeds into a collection of separate but intertwined events. I felt changed after reading it, like I needed a shower… or something stiff to ease my nerves. Above all Osbourne delivers. The product may not make you feel great, but after a taste, it is all you want.

I got an opportunity to ask Osborne a few questions about his work. I wanted to explore where the story came from and delve into the artistic choices of its author. 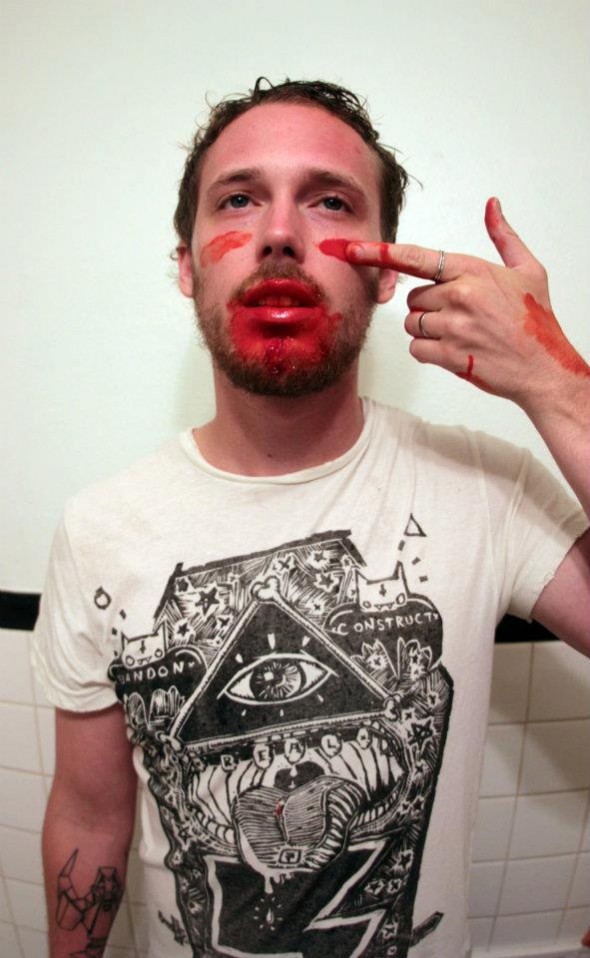 I didn’t exactly ask for permission to pull this one, but I liked it as it holds a certain appeal.
Photo by: Chase Spivey. – Managing Editor

okc.net: How would you say your decision to set the piece in rural Oklahoma affected the final product? I understand that “they” say, write what you know, but I feel that there was a statement you were attempting to make. I personally have a bit of family in the Ada area, so I have spent some time there. You nailed it.

Osbourne: My first novel was based in the 1950s in Soviet Russia. I had to do a shit-load of research for that, in order to not sound like a fool. For the second book, I wanted to touch on something a bit closer to home. I’m originally from Lawton, and I believe that that town is evil. There is something about it that is deeply off. The people there, I love a good number of them. My mother lives there. But a few years ago my personal life went down the shitter and I moved back to that town and just spiraled out of control. I was living in my car and on friend’s couches and all around me there was this desperation and awfulness that I thankfully was able, with the help of loved ones, to pull myself out of. It was the crossroads. Do I go this way and never come back? Or do I do the hard thing? In the book, all the characters are stuck in similar situations: they are in poverty, in a town that wants them dead, and they have choices: they can go the easy route, they can give in to that immense pressure, or they can develop a bit of a backbone and do the hard, right thing. Do you sell drugs or hurt people? Do you stay with a job that you hate because it’s stable? Or do you batten down the hatches and do the right thing? This being a noir, they’re not going to. And the consequences they have to deal with are my way of saying: you have to be strong.

okc.net: Where do the fraternal bonds you intricately developed in your work come from? Do you, yourself have a brother? If so, what is he like?

Osbourne:I love my little brother in a way that I don’t love anyone else. We were each other’s best friend since the day he was born. We were inseparable for years and years. Because I’m the older brother, I had an influence on him, both positive and negative. And I wanted to write about the responsibility an older brother feels toward his younger sibling. I saw my brother emulate the choices I made in life, and I’m not talking about the bad stuff, but at the time I lived in a very bad way, and I realized that there was a chance that I could influence the person I loved most to also go rotten. So yeah, there’s a big theme of the book that goes: “The choices you make don’t just affect you, you don’t live in a bubble, so act accordingly.â€

okc.net: What authors are you reading? From whence do you draw your literary inspiration?

Osbourne: My favorite authors are David Foster Wallace and James Ellroy. I tend to be influenced more by the latter, because DFW was so singular that it would be silly to try to emulate him. I’m concerned mostly with concise, minimalist prose. I am obsessive about word choice. It took me two years to get this little book right. So Ellroy is a big inspiration for that. James Sallis is another author who can create something deep and beautiful with very few words. Daniel Woodrell, Tom Piccirilli, Toni Morrison, Cormac McCarthy, and the older stuff. Jim Thompson is one of my heroes. Chandler and Hammett. I could go on and on.

â€œLow Down Death Right Easyâ€ is the LitReactor Book Club pick for April. Other things to know about Osbourne? He’s lives in Norman with his wife Stacey and their pooch Kahlua.

Purchase the book in Paper Back:

Purchase the book on Kindle:

One comment to “LITERATI: “Low Down Death Right Easy””