I’m going to start writing a weekly feature about obscure, under-appreciated, or hard to find records. Please don’t email me to tell me that my pick isn’t obscure enough because you’ve had it for ages. Good for you, you know more about something than I do. I don’t know how many of these are still in print, but Size Records and Guestroom Records will be happy to find out for you. 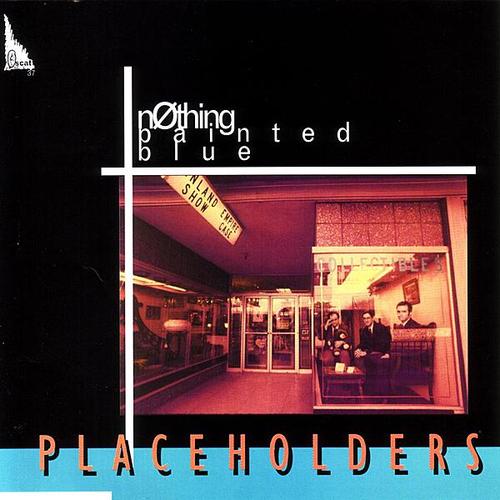 I used to joke about how 90’s nostalgia was just around the corner. I thought the premise itself was funny because in 1999 it didn’t seem to me that there was much in the 90s to be nostalgic about. The 9/11 decade proved me wrong quickly enough. Aside from peace and prosperity, it turns out there were a few other things to be excited about at the time. For one thing, DIY culture had not yet been completely co-opted by corporate America, so there was a lot of really cool stuff just below the cultural surface. I was pen pals with zine girls, I read alternative comics, I spent countless hours trolling through the racks at CD Warehouse looking for anything weird that showed up. If this makes me sound like I was a cool teenager, please understand that I was actually just trying too hard.

One record that showed up randomly back in those days was “Placeholders” by Nothing Painted Blue. This was prior to mp3s giving anyone with an Internet connection access to all of recorded music, so many times I ended up with albums without having anything more than a vague idea of what they would sound like. If I hadn’t heard of a band and the cover looked cool, I would usually buy it. I’m pretty sure this was one of those discoveries justified by my general policy.

The only description of this band and album that sounds accurate is â€œreally fuzzy college rock.â€ Franklin Bruno delivers, perhaps needlessly, dense and literate lyrics in a Lou Reed monotone. Musically the band kind of sounds like REM as interpreted by The Pixies, alternately distorted and jangly. The standout tracks bring together all of these elements. â€œHouseguestâ€ is a funny little story song about the passive aggressive revenge of a housesitting ex: â€œI’ve done things in your room you’d be embarrassed to accuse me of.” “Career Day” makes the college rock connection explicit, with a wry critique of the idea of college as corporate trade school and recruiting office: “They say UC’s overgrown/with Marxists and Maoists but mostly I’ve known/only fresh faced recruits.”

After 13 tracks, the distinct sound of this record makes the tracks begin to blend together. There are a few tracks on side two that just don’t work, although I appreciate the math pun in the title of â€œCan’t F(x)â€

Franklin Bruno is now a sometime member of The Mountain Goats, which makes sense. Both bands are lyrically inventive, favoring short vignettes over the typical pop fare, and resolutely lo-fi. “Nothing Painted Blue,” however, is much much louder.