Iâ€™m no librarian. My wife, who is a librarian, will remind you that anyone calling themselves a librarian better have the professional degree to back it up, along with a commitment to the profession that goes beyond the daily tasks of sorting books and helping patrons. I have neither of those things.

What I do have is a contract which says that from January through the middle of March, I am the librarian who is solely responsible for all administration of the FAAâ€™s Mike Monroney Aeronautical Center library. This contract will not be renewed in March, because the library has been officially closed to the public as of February 22nd and, unofficially, will not be reopened.

The library is attached to the FAA academy, where our nationâ€™s air traffic controllers and inspectors are trained and re-trained. By the time I began my short term in January, the rumor of the libraryâ€™s closing was already well circulated. As a contractor in the FAA, I am told virtually nothing by anyone, but the basic gist seems to be that the Employee Association (EA) â€œbookstoreâ€ wants the space for itself, since its own building is old and relatively far away from the wallets of the academyâ€™s students. I put quotes around the word bookstore because youâ€™d be hard-pressed to find many books there. Itâ€™s mostly a souvenir gift shop, specializing in FAA-themed t-shirts and colorful ID badge lanyards.

I was called into a meeting a few weeks ago to discuss the possible closing of the library. Career FAA decision-makers assured me and an assisting librarian from the Civil Aerospace Medical Institute (CAMI) that they werenâ€™t â€œlibrary haters,” and that they were making these decisions as rationally and objectively as possible. The implication being that anyone wanting to keep the place open was being irrational and over-emotional, and only the serious people could be trusted to make the brave decision to flush the FAAâ€™s history down the toilet. When it was asked if the FAA training academy could keep its accreditation without a library, the academyâ€™s â€œVirtual Libraryâ€ was offered as a solution. That would be great, I guess, if the virtual library had any content of its own instead of linking to a couple dozen other websites.

Of course, no one in the meeting would say definitively â€œthe library is closingâ€ or that a decision had been made. But the next day, people from the EA Bookstore were in the library with blueprints and measuring tape, visualizing the optimal locations for greeting card racks and aviation-themed OKC Thunder t-shirts. Emotions were running strong, but as a temporary contractor, I hadnâ€™t developed much of an attachment to the place. The same could not be said for the FAA old timers who came to look over their favorite items one last time, soaking up the memories they had, and reflecting on the years of service theyâ€™d given the agency.

I wasnâ€™t sure what to expect when the Terrys showed up. They came from the FAA headquarters in D.C. One is the law librarian for the FAAâ€™s general counsel; the other is the FAAâ€™s professional historian. I thought they might be like vultures, looking for tasty morsels to strip out of the collection before it gets trashed. Instead, they turned out to be just as mortified about the doomed library as I was. Every item they pulled to take back to headquarters in D.C. was selected for the sake of preservation and accessibility.

Until they arrived, I had never realized what kinds of treasures were in my stewardship. We found tomes by Lindbergh, Earhart, and the Wright Brothers. I have pristine volumes of hard to find aeronautical journals. I have reams of byzantine orders which have changed over decades, shaping the most regulated industry in the world. Sure, those regulations can be found online in their current form, but anyone interested in their origins and their evolution would be completely lost without the libraryâ€™s holdings. When it comes to the collected history of civilian flight in America, there was no other collection like the one we had in Oklahoma City.

After the Terrys and CAMI took their pick of what they could over the course of a week, limited by their own space and budget issues, the obvious destination for what remains of the collection is a university. OU and OSU both have aviation programs and strong library systems, so it seemed like a no-brainer to offer them what we could. The universities would get their hands on a valuable collection with minimal transport costs, while the FAA keeps its valuables intact. It would take a lot of work to get everything moved, but itâ€™s as close to a win-win as we could get. Unfortunately, after OU showed interest, a new rumor made its way back to us: no donations. When the library closes, anything left will be put on the federal governmentâ€™s excess property clearinghouse. Anything not claimed by another Federal agency will almost certainly be destroyed. Damn.

This news came an hour after another FAA decision maker came by to reassure us that she loves books and libraries. The reality is that weâ€™ve struggled to get the support we need. We asked for over a thousand heavy duty shipping boxes that weâ€™d need to pack a fraction of this collection, and instead someone showed up two days later with three used printer paper boxes. By the time we got supplies that were actually usable, we hardly had time to get things packed up for headquarters.

The Terrys have since left for HQ, and I was left with a library to pack up, a task that to do properly would take one person the better part of a year. I was given two weeks. My contract was not extended, on the pretext that the fiscal cliff and sequestration has tied their hands. The reality is that the decision was made months or even years before I even got the job, and the sequester has given the decision makers a way to shift blame away from themselves while continuing to provide the least amount of support possible. These are career-minded bureaucrats who described the library as â€œprime real estateâ€ and slowly strangled its support until no one would be shocked when it went away for good. 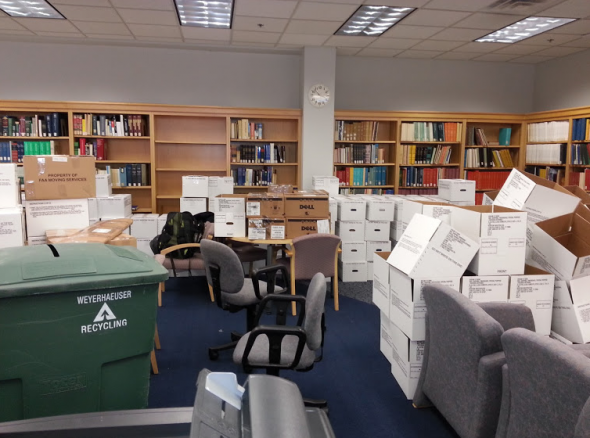 Theyâ€™ll make some short term budget gains that will look great when theyâ€™re up for their next promotion, but in doing so theyâ€™ll be throwing away millions of dollars and an unquantifiable amount of care and expertise that the Mike Monroney Aeronautical Center Library represented.

Donâ€™t take your libraries for granted, people. If you forget about them, they go away. And chances are, someoneâ€™s career depends on you forgetting about them.