Itâ€™s Tuesday at noon and Iâ€™m looking for Headhunters, a bar downtown thatâ€™s hosting â€œThis is Austin, Not L.A.â€ an unofficial comedy showcase with a very punk rock vibe. The goal today is to tell some jokes in the heart of the festival. Cameron Buchholtz, comedy mega brain and former Oklahomie, has messaged the showâ€™s curator on my behalf. Thereâ€™s no guarantee that he can get me on but if I show up and thereâ€™s an open slot, all bets are off. This all hinges on me finding the place.

Fifteen minutes have elapsed and Iâ€™m still pacing between the same stretch of buildings, trying to call anybody who knows this city.

â€œI think I see it. What the fuck is a steam punk lounge?â€

If youâ€™re not a manly man, you might have some questions running through your head right about now. The first of which being, “Whatâ€™s Bar Rescue?” Well, have I got a manswer for you. Bar Rescue is a popular show on Spike where a very American Gordon Ramsey rip-off tries to save failing bars ala Kitchen Nightmares. It sounds dumb, but I watched a mini-marathon in my hotel room last year before doing a show. Itâ€™s amazingly addictive.

â€œYeah. They thought it would make the bar more marketable this way. But who knows.â€

As I walk towards the building, I see bands hauling gear in every direction. Their aura reeks of excitement and anxiety, which Iâ€™m guessing stems from the rat race mentality that performers fall victim to at large festivals. Iâ€™ve been there before and Iâ€™ll be there again. Being in a band whoâ€™s playing in the daytime at SXSW is like being a young Goran Dragic at the NBA All-Star game. You know you have the potential to hoop with best ballers in the world, even if the world doesnâ€™t quite know it yet.

Inside Metal and Lace, no one feels this pressure. Itâ€™s non-existent. Everyone is laid back and friendly. Iâ€™m hanging out at the bar, taking shots with other comics when the show starts. For 1 p.m. in the afternoon, the energy in the room is great. Or itâ€™s possible, Iâ€™m just happy to hear new jokes in a new city. Cameron shows up three comics into the show, taps me on the shoulder and says Iâ€™m next. I do five minutes and have more fun doing comedy than I thought was possible this early in the day. This is SXSW and so far, so good. 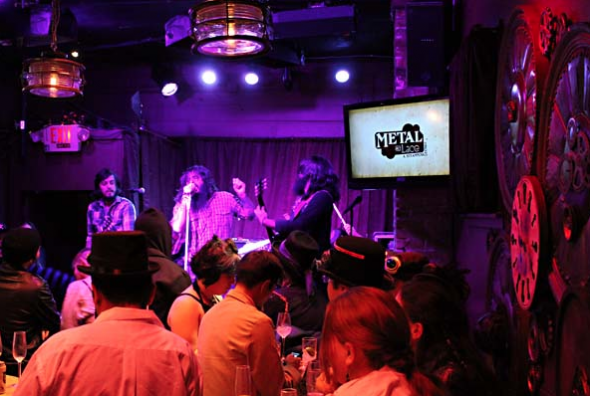