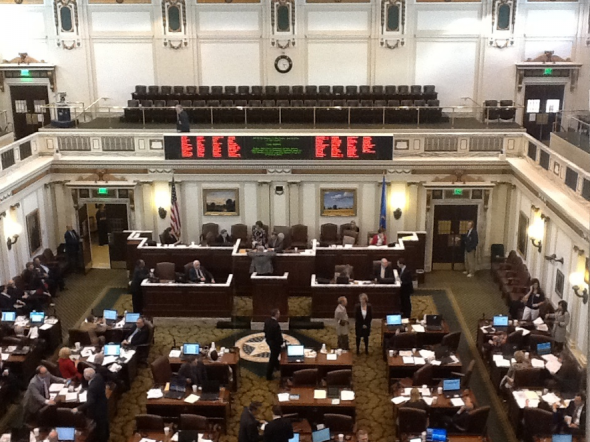 It kind of goes without saying that I’m a nerd. I write a blog called â€œOdd Oklahomaâ€ where I explore the weirdness that makes this place interesting. That said, there are categories of nerd, and one of the subreddits of nerdery that I enjoy is parliamentary procedure or Robert’s Rules of Order. Back in my college days, I spent some time in student government, Oklahoma Intercollegiate Legislature, and even model United Nations. Yes, I’ve been a parliamentarian and a chair.

So I had a bit of a nerdgasm yesterday when the Oklahoma House Democrats got pissed off and decided to show the House Republicans that they aren’t as powerless as everyone thinks.

The story begins with the second bill of the afternoon, HB1721 by Rep. Leslie Osborn of District 47. The bill changes the cap for OHLAP, a state program that covers the cost of college tuition for students whose parentsâ€™ gross income is less than $50,000 at the time of application. Students usually apply while they are in high school. If their parents’ income grosses over $100,000 by the time the student enters college, the scholarship is revoked. Rep. Osborn is trying to lower that cap. In the original version of the bill, the cap was $75,000, but Republicans in the House amended it down to $60,000.

Of course, most of the House Democrats were opposed to the bill because by lowering the cap it assumes people above a certain income threshold should be able to pay for their childâ€™s education, and it is no surprise that they wanted to debate since wealth distribution is a hotly-contested topic right now. During the Q&A for HB 1721, House Democrats were asking some uncomfortable questions, so when it came time to debate, Assistant Majority Floor Leader Paul Wesslehoft moved to limit debate from the full 60 minutes down to a scant 15 minutes.

Oklahoma House Republicans must have forgotten that it doesn’t take many people to bring legislative gears to a halt when they passed the motion to limit debate by a vote of 51-29. Their action provoked the House Democrats, and that’s when the legislative-shit hit the fan.

The play-by-play? House Democrats would make a motion. If the motion was a proper one, it would immediately be moved to be tabled by one of the Republicans. This would require a tallied vote, and essentially it had the effect of killing time. If the motion was ruled by the chair to be out of order, there would be a motion by a Democrat to overrule the decision of the chair. This action would also require a tallied vote. For the next hour Democrats proposed motion after motion, failing each time by wide margins, but they did prevent any forward movement whatsoever on the bill. It was mentioned on more than one occasion that if the Republicans had just allowed a debate on the bill, it would have been a non-issue.

The Democrats knew they wouldn’t win any of these votes. They were just trying to prove a point to House leadership and other members. If they wanted to, they could completely gum up the legislative session, making any progress nearly impossible. You can’t filibuster in the Oklahoma House, but you don’t need to if you have a few members that are willing to coordinate to make life a nightmare for the chair. Isn’t parliamentary procedure cool?

So, after an hour of this, Representative Wesslehoft apologized on the house floor to the minority and majority parties, moving to rescind his motion to limit debate. The motion passed easily with a voice vote. At that time, an hour debate on the bill began. Seven Democrats spoke against. Three Republicans spoke for. Ultimately, the bill passed 56-37.

If I were the Republican party, I would get my most extreme bills up for a vote pretty quickly. The Democrats could cause real trouble if they let the more reasonable stuff by before completely shutting things down. They could prevent most of the genuinely awful bills from ever seeing the light of day.

Do you have kids that will likely go to college in Oklahoma? You might want to consider the effect this bill will have on your future when you take the reality of the middle class earns into account:

I couldn’t have written this story without the wonderful tweets by Oklahoma Capitol Source. Peter Rudy is there every day covering the legislature. He doesn’t just sit in on floor sessions. That guy is usually one of the first people at the committee meetings. And if you appreciate that kind of dedication to local politics, you should give that website and twitter feed some love.