It heartens us to see the United Filmmakers of Oklahoma community grow. We met them back in the summer of 2011 at the deadCenter Film Festival. Since then they’ve been making movies as a group, holding showcases, and advancing everyone’s indie film cred. This Saturday they will host another screening at Istvan Gallery.

United Filmmakers of Oklahoma (UFO) is hosting its 2nd Annual Independent Filmmakers Showcase on Saturday, February 16th. Â The event will take place at the Istvan Gallery in Oklahoma City at 7pm. UFO will be showing an eclectic mix of cross genre short films and will feature UFO produced short films as well work from its members.

You’ll walk into Istvan Gallery and be greeted by a warm group of people. You’ll pay your $5 admission fee. You’ll be treated to refreshments. Mingle if you like, talk about Zombies or Wolfgang Petersen’s “Das Boot”, whatever floats your boat. Find a seat. Wait for the magic.

3. Something you didn’t know before that you will now.

Founder and DirectorÂ Jena Collins says:Â  What are our future plans? We are striving to become not only a film company for all independent Oklahoma Filmmakers but also to become a film school down the road. There is parking at Istvan and across the street there is a lot by the apartments that is available to use. That the show case is a great opportunity for Filmmakers to get their work shown! That is something UFO does proudly!

4. Details about the United Filmmakers of Oklahoma.

UFO is an expanding group ofÂ directors, writers, actors, artists, producers, crew people and moreÂ who come together for the sole purpose of creating independent films. Future plans include two independent features to be shot in Oklahoma and a variety of diverse film projects later this year. All skill levels are welcome to join UFO.

Established in April 2011, UFO has already grown rapidly due to public interest and a prominent presence in local events such as, the Plaza Arts Districtâ€™s â€œLive on the Plaza.â€ UFO has competed in numerous film festivals and won Best Micro Comedy Short at Bare Bones International Film Festival.
Check their website.
Check their FB community.
Hey, you can RSVP to the event. 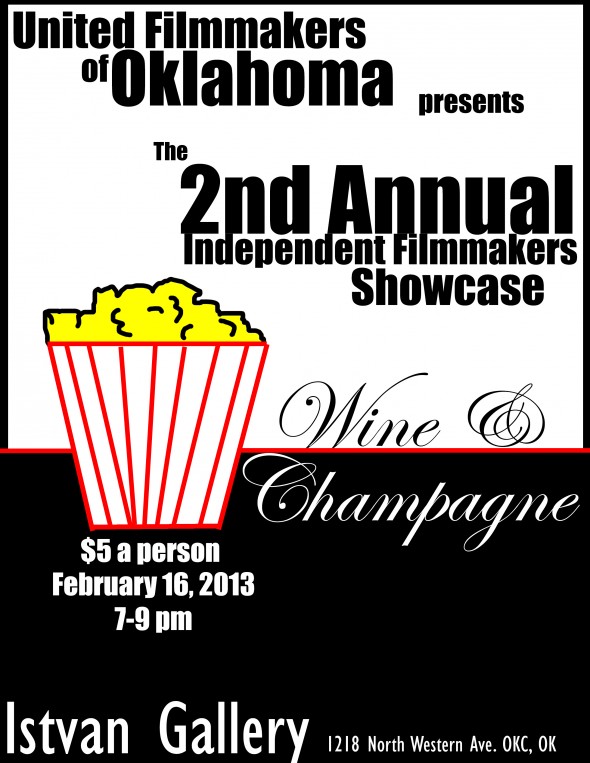