Have you ever read U.S. public school textbooks and wondered who controls the information that is printed?Â  Well, you’re in luck curious patriot! There’s a film that documents this process and it has been causing quite a stir. “The Revisionaries,” which had a theatrical release in October 2012, screens free of charge on February 2nd at the University of Central Oklahoma, 100 North University Drive, Edmond. The film starts at 7:30 p.m. and will be in the UCO Constitution Hall theater, which is located in the Nigh University building. Here’s a map. Parking is free in parking lots east of the building.

Essentially the film looks into how 15 people who sit on the Texas State Board of Education decide what will be taught to school children, but how their choices effect the whole nation because of how the American textbook industry operates. Director Scott Thurman writes, “…I discovered a survey stating that half of the American public did not accept the theory of evolution and so I decided to focus my film on a Biology teacher and the lessons on evolution. Not long after I started following these classroom discussions, I learned about the political debate on the State Board of Education in Texas over how evolution would be taught in science and later how the concept of ‘separation between church and state’ would be understood in social studies, among other controversial topics.”

In the director’s statement, I found it curious that Thurman wanted to have a character-driven documentary as well. He describes why he chose to follow Don McLeroy, chairman of the Texas State Board of Education. Thurman notes that McLeroy is an “outspoken creationist on a mission to convince the public and next generation of students that evolution is not sound science and that America is exceptional in part because it was founded on Christian principles.” With some dedicated effort, the director eventually succeeds in getting full-access to McLeroy’s working life, the fourth grade Sunday school class he teaches, and looks into his home life. It seems Thurman is not out to demonize McLeroy, but prefers to explore the man’s way of thinking beyond the stereotype so that the “compassion and complexities” of McLeroy’s character are also portrayed.

These seem like fairly compelling issues to examine within the context of a national conversation about culture, religion, and public policy. Why? Because rarely are the people who influence movements simple creatures, especially when there are a myriad of factors at work.

Since I was curious about the film screening, I talked with AOK President Red McCall about the movement to bring the film to central Oklahoma. It also bears mentioning that I recently noticed a map that placed Oklahoma City 15th in the nation for “America’s Most and Least Bible-Minded Cities.” 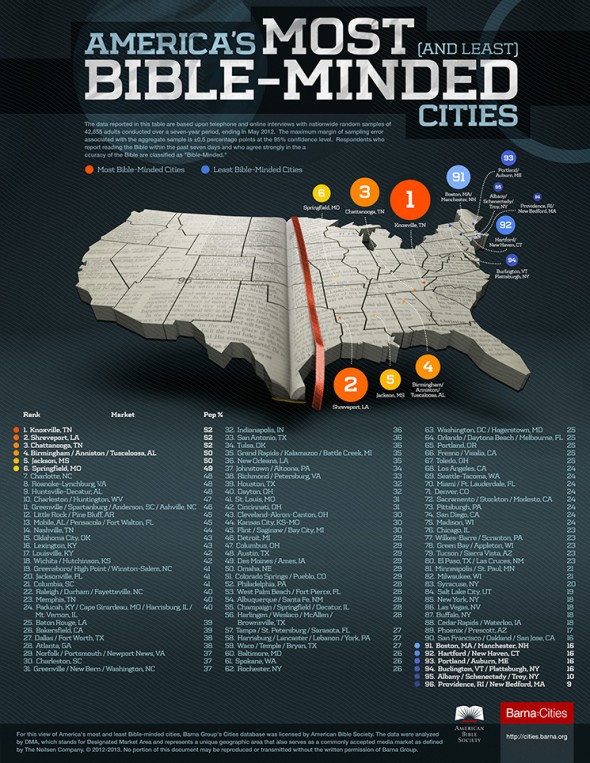 Other notes? Tulsa places 34th. Perhaps it is kind of ironic that Texas is not in the top 5, 10, nor 20 as Dallas/Ft. Worth appears to place 27th. (Image credit – Barna:Cities)

okc.net: What was the impetus behind Oklahoma Atheists (AOK) screening this film?

McCall: I posted a picture of the movie poster on the public AOK page on Facebook. Kathryn Schwartz saw it, and asked if there would be any interest in people donating money to get the rights to the movie. When we got the movie, we booked a 200-seat theater, but then we were upgraded to a 500-seat theater by professor Caleb Lack at UCO. Church and state separation is something many atheists hold dear, and we thought that this film would be something that members would like to see. When we got the 500-seat theater, we figured we might as well show it to as many people as we can.

okc.net: AOK members donated money to get the rights to show this film, how much did that cost?

okc.net: What does AOK hope to accomplish by screening this film free of charge?

McCall: By purchasing the rights to the film we are not allowed to charge.

okc.net: Do you think there needs to be a national conversation about the issues this documentary raises?

McCall: Absolutely. Texas has too much power over the content that goes into public school textbooks. Today’s children are tomorrows leaders.

okc.net: Have you met any resistance in trying to bring this film to the OKC metro?

McCall: I have not. It has been advertised mainly inside the atheist community. Though we do know that there will be other groups attending. At this point we are unsure of the actual numbers.

okc.net: Exactly how large is the theater it will screen in?

McCall: It holds 500 seats, but I am not sure on the volume.

okc.net: If you fill most of the seats, do you think AOK will host other film screenings?

McCall: I hope so. There are not a lot of films that come along that can gather this kind of speed in our community. If Religious 2 comes out, I think that we should purchase rights to that film as well.

okc.net: Is there anything I haven’t asked that you feel is important to know either about this film or the event?

McCall: It is co-hosted by the UCO Skeptics.

Other points of interest? Rotten Tomatoes is giving the film 91% based on 11 critic reviews.

If the event interests you, you can check it the event page on Facebook too. 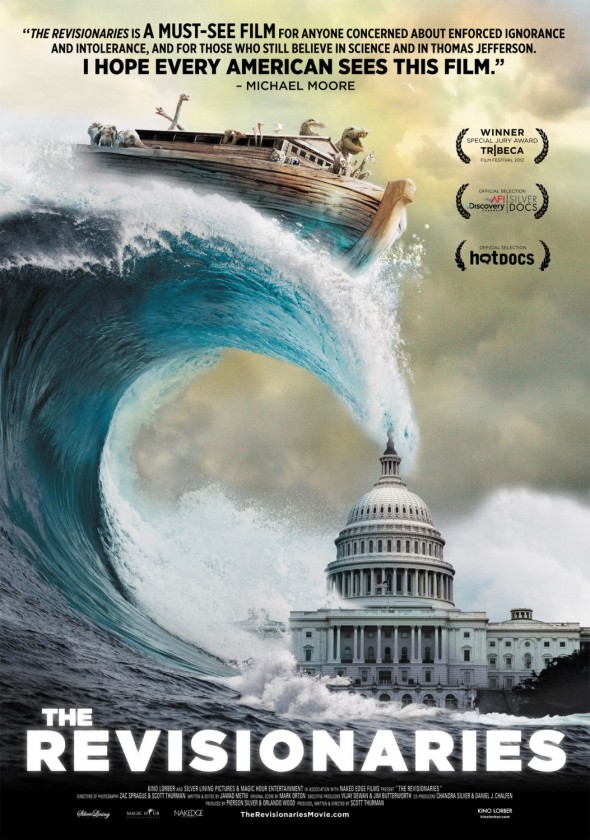