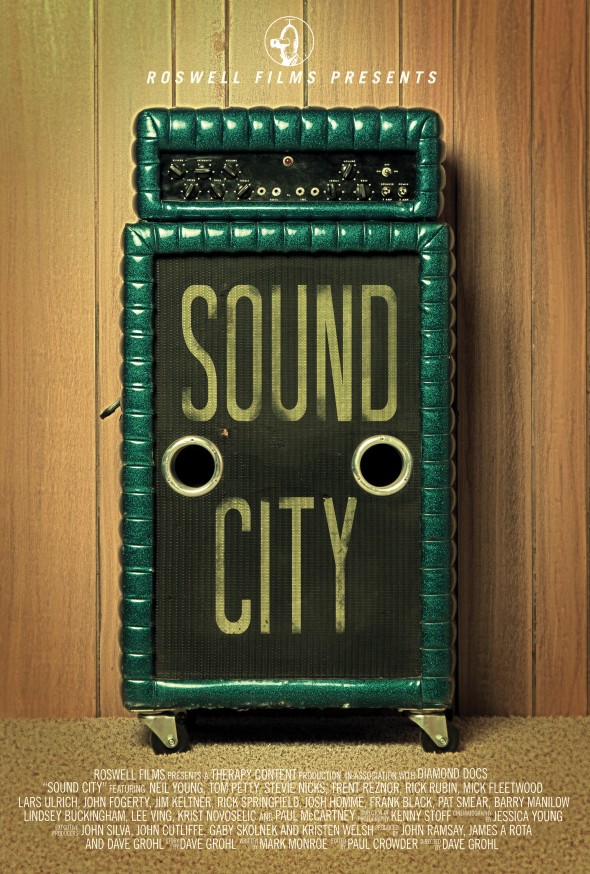 Dave Grohl’s got a soft spot for this relic of the analog era, which is well past its heyday, but still fondly recalled in this new documentary. The one-night-only screening happening in select theaters hits OKC at Harkins Theaters in Bricktown Jan 31st, 7:30 p.m.

Before anyone gives me crap for choosing “ode” over “ballad,” let me take a moment to point out that an ode is to commemorative praise as a ballad is to any old story. And these days, especially, ballads have become synonymous with love.

Does Dave Grohl have love for Sound City?

Is his love for Sound City so all-consuming that is backed by a choir and a full orchestra?

I don’t know. But I guess we’ll find out after we’ve watched the documentary this Thursday. Previously it has only been screened at Sundance Film Festival, so there are not tons of reviews out for it, although Metacritic is giving it a 78 out 100. And in searching around the web it seems like it is receiving generally positive reviews across the board. I’m just going to say now: if people hold up lighters at the end of this film, I may very well change the title of this article. Although given that any open flames in a theater = bad, I feel pretty confident I won’t have to do that.

Upon viewing the trailer and reading the press material, it seems “Sound City” is more like an ode. Snippets of interviews and quotes suggest all parties involved with this film are commemorating the good old days of analog, specifically the equipment and rooms only found at Sound City. Because, you know, that’s just how it was man. First impression: is this nostalgia for the sake of it? Maybe a little bit, yes. On the surface, I find it hard to buy into the idea that the “human element” has been lost in making music as the film asserts. Although as an avid NOT-listener of contemporary pop music, maybe their not entirely off the mark either. But setting aside preference for how musicians produce music along with the debate between analog and digital formats, Grohl’s director’s statement still peaks my interest. It would seem that in digging into the history of this previously unsung recording studio, he hopes for others to be inspired by music all over again.

“As a first time director, my main intention with “Sound City” was not only to do justice to the incredible legacy of the studio, but to celebrate the human element of music, and to inspire the NEXT 40 years of musicians to find that magic within themselves. That feeling that I had sitting on my living room floor, listening to album after album, swimming in the history of music that came before me. That feeling that I had when I picked up a guitar for the first time and strummed the riff to “Smoke on the Water” by Deep Purple… without anyone showing me how! The realization that I could do this too. That music is human, and real, and beautiful in its imperfection and feel.”

I don’t know how many out there reading his statement can gel with that sentiment. We’re not all musicians nor are many hardcore audiophiles. But even so, it makes perfect sense to me. The first time I picked up a bass guitar, some old pawn shop thing, the random notes I plucked led me to string together the ones to “Louie Louie,” because stringing musical notes together by ear runs in my family (thanks, grandma!) and translating the random things that pop to mind is not exactly exclusive talent as it innately human. But alas, I’m a professional writer and not a professional musician. And a professional writer tells you that the proper title to “Louie Louie” includes no comma because Richard Berry, who wrote the song in 1955, says the correct way omits the comma. Another random fact about “Louie Louie”? The Kingsmen, who popularized Berry’s song, made a few mistakes in not only rhythm, but in phrasing too, thereby changing the way this song is remembered. So, don’t be fooled by the slick gloss of high-end professionalism. It would appear the film also seems to suggest that great things can happen when you create art organically.

I’m thinking if you nerd hard for music trivia and history, this documentary will prove to be a goldmine of little known facts behind some of the most influential albums recorded at Sound City. Plus it seems there are some full band reunions involved too, in addition to new and collaborative music being made with that old Neve 8028. So who else makes an appearance? Neil Young, Tom Petty, Stevie Nicks, Trent Reznor, Rick Rubin, Mick Fleetwood, Lars Ulrich, John Fogerty, Rick Springfield, Josh Homme, Frank Black, Pat Smear, Barry Manilow, Lindsey Buckingham, Lee Ving, Krist Novoselic and Paul McCartney…and the list goes on. 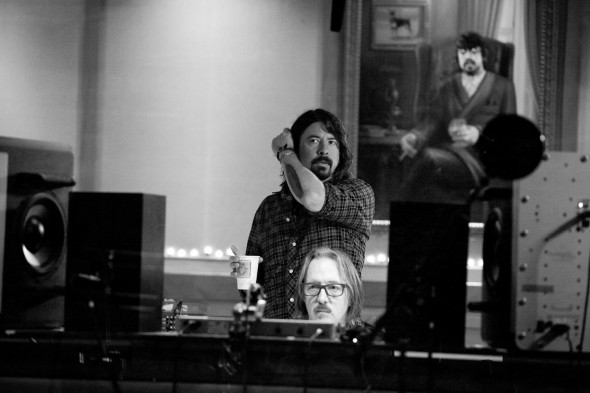 As it has been said, “there ain’t no school like old school” and looks like Dave Grohl is the headmaster. Actually, there’s no crime involved here as Grohl is now the proud owner of Sound City’s Neve 8028. Photo credit: Variance Films.

I’m going to pull a LeVar Burton circa his “Reading Rainbow” days and say “you don’t have to take my word for it.” Mostly because I hate hype machines, so you can watch the trailer and decide if it is worth seeing. If it tickles you in all the right places, get your tickets here.