Did I just mash up two Bond film titles? Yes. But the more significant question is this: does Skyfall redeem the franchise after Quantum’s big flop, and if so, can it revive the series making it once again the epitome of spy action-thrillers the world has come to know and love?

The answer: YES! And in an outstanding fashion! 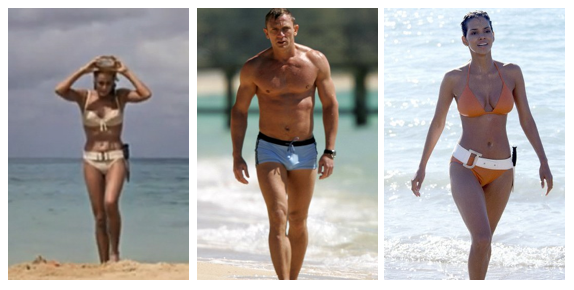 Since the opening credits to “Skyfall” see James Bond plunging into the water, we thought it would be fun to review a few iconic “rising out of the water” scenes. Left to right: Honey Ryder (Dr. No), James Bond (Casino Royale), and Giacinta ‘Jinx’ Johnson (Die Another Day).

Skyfall is such an exquisitely constructed film that Iâ€™d have to be only the most cantankerous of film reviewers to say that I remembered any of its very minor flaws. The thickly engrossing narrative dares to wade into the dark waters of the human soul. It is the kind of exploration of character that’s often found in the novels. We see the demons of nearly every main character come out to play, especially those of Bond and the villain, Silva (Javier Bardem). And Silvaâ€™s demons have put him in a vengeful pursuit of M (Judy Dench). Naturally Bond must find out why and how to stop the terrorist before Silva can succeed in his personal vendetta against M.

I have to say that Bardem’s Silva is one of the more amazing Bond villains I’ve seen to-date. He is far more multifaceted. He is both amusing and disturbing, yet pitiable and vile. Silva’s character is a near perfect foil for Bond and his introduction into the storyline proves as much, from his tale about the last two surviving rats on an island down to his playful examination of Bond’s physique and psyche, Bardem as Silva nearly steals the scenes he is in.

Skyfall’s drop-dead gorgeous visual storytelling and clever screenwriting builds momentum and suspense that’s been seen in some of the earliest Bond films, yet it keeps pace with the new series featuring Mr. Craig. Iâ€™ve said time and time again: his is the most accurate portrayal of Bond, if you’re a fan of the novels, since Sean Conneryâ€™s premiere in Dr. No.

The sets and locations transport one back to sweet memories of Bondâ€™s old school style of field-work and Casino routine: go in, get the money along with the information (and a girl or two), start a fight (or finish one), and then make a dramatic escape. However, Craigâ€™s edginess provides the level of grit needed to make physical tussles hard to watch, but hard to turn away from too.

It might seem like I’m stuck on the idea of â€œoldâ€ meeting â€œnew,” but thatâ€™s truly what this Bond film is. It combines the best of the past and present movies into a engaging interplay between old-school conventions as toyed with in new twists. And it all done with the kind of smug aplomb that is befitting of Mr. Bond himself. Some may complain and say itâ€™s not like many of the past Bond films, and therefore not a “real” Bond film itself. However, in my opinion it IS the best one since the originals (before they got goofy), and I have never had so much praise for one Bond film in all my years of watching them. For the movie nerds out there, it is worth mentioning that “Skyfall,” “Tomorrow Never Dies,” and “Die Another Day” are the only Eon Studio-produced Bond films to have no direct relation to the original Ian Fleming novels. But what I find even more intriguing is that “Skyfall” is clearly setting up the whole cast for a new reboot too. Q is younger, Moneypenny’s recasting is a nicely updated twist, and not to give anything away, but M’s office changes decor too.

I could write more, but that would be explaining too much and still wouldnâ€™t do the film justice. Go and see it for yourself! Itâ€™ll leave you wanting to spend the rest of your hard earned money on another monthâ€™s worth of tickets!