While carpooling on the way out to the Choctaw Oktoberfest, Stefan and I discovered that we had a mutual appreciation for John Carpenter’s 1986 movie “Big Trouble in Little China.”Â  I also have fond memories of “The Golden Child,” starring Eddie Murphy and a bowl of blood oatmeal, but Stefan informs me that my affection is misplaced as he’s seen it recently and believes that “The Golden Child” did not age well. Naturally all the talk of 80s movies with mystical Chinese-themed plot summaries led me to this question: “Is there such a thing as a good Asian beer?”

I mean, I’ve had Asian beer before, but it wasn’t remarkable enough that I would call it good. I don’t even remember if what I had, had been brewed by Sapporo or Asahi. At any rate, once I started on the path to serious inquiry, I decided that it was necessary to pair characters from “Big Trouble in Little China” and their various factions with a beer that best represented each of them.

Below are the results of my research. 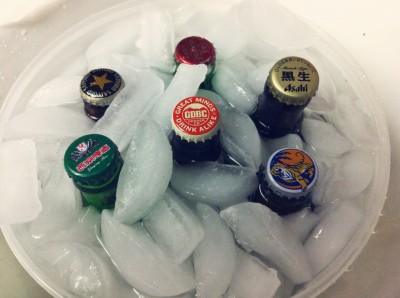 A motley crew indeed. The center beer would be a Yeti Imperial Stout. It is like liquid dark chocolate with roasty notes of espresso.

It is worth noting that I tried very hard to get Stefan to write a portion of this review. But given how he feels about Asian beer in general, no amount of love for “Big Trouble in Little China” would convince him to put into words his lack of interest in the selections we found. Even the surprisingly, not completely awful beers were enough to sway him to at least attempt a light-hearted snark fest.

If Jack Burton were a beer he’d be a Tiger: 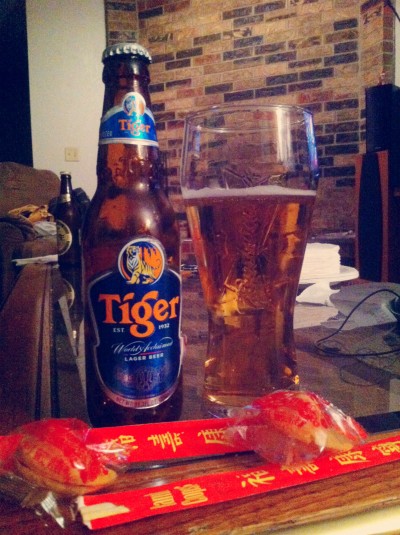 I would like to think Jack Burton has enough taste to drink the Tiger beer and not the extra skunky Yanjing beer. But who knows, he might drink the Yanjing while gambling, because it puts hair on your chest or something.

It poured clear, had medium to high carbonation. While it wasn’t what I would call outstanding, I do remember that it was several notches above being terribly offensive in taste. Of course, in double speak, that means it was more bland than anything else, but pleasantly so. Is there such a thing as unpleasantly bland, though? Yes.Â  I think the crowning achievement of this beer is that we didn’t take a few sips and then pour it down the sink. Which is not unlike Jack Burton, as he is fairly likable, despite his rough edges.

“We’re off to see the wizard, the wonderful wizard of…OH, wrong movie!” Although Jack Burton, pictured center, is a bit of tiger. Rawr! 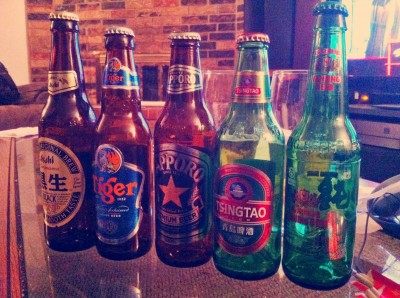 From left to right in order of preference: Asahi, Tiger, Sapporo, Tsingtao, and Yanjing Beer. We selected these beers because the Asian cast in the movie most certainly was not a 100% Chinese.

Review: I got hints of roasted malts. It was dark and didn’t seem to retain much of a head. Overall, this was not a bad beer. Of all the beers we tried, we ranked it first because it had a detectable flavor that wasn’t terrible. Like if I were ordering sushi and watching questionable Japanese game shows at some all night dive bar in Tokyo, I’d drink this.

Review: This poured clear and golden, retained little head, didn’t have much of a smell, seemed pretty carbonated, and overall tasted passably bland as it could have been worse. I don’t think I’d willing drink this again as I’d rather get a sake or some plain H20.

Review: I’m really sorry if this is as the label claims “the #1 selling beer in China.” This is like Chinese Coors Light but skunky and chalky. It’s carbonated, doesn’t have much of a beer smell, and no, I would not drink it again. 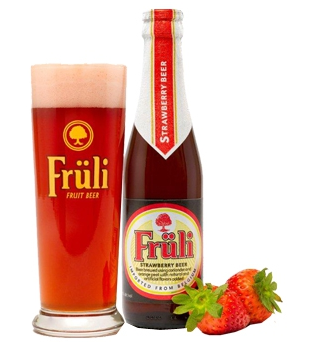 While Gracie Law is a blond American with green eyes, and she’s not exactly one of the guys. Fruli’s Strawberry beer starts with a base of Belgium White Ale which is then mixed with spices and strawberry juices. We think this is sweet enough for a social justice crusader like Gracie Law. Plus red is China’s lucky color.

Style: Fruit Beer/White Ale base with added flavors of spice and strawberries.

Review: We originally tried the Fruli Strawberry at the Oktoberfest in Choctaw. My preconceptions were completely blown out of the water upon tasting this beer. This is not like an Abita Purple Haze or Seadog Blueberry Wheat fruit beer, wherein the fruitiness is lightly hinted at, rather this thing bombards your taste buds with sweetness, more sweetness, and then it heaps a pile of strawberries on top of that. It’s more like Strawberry juice with beer added into it. It pours cloudy red. And it did not have much of a head when it was served to us in our plastic cups at the Oktoberfest. It is truly candy sweet, like one of those little strawberry hard candies with extra liquid strawberry syrup inside, and while it is highly carbonated, it is ever-so cloying. Which is kind of like Gracie Law, who has a way of showing up and sticking to you whether you wanted her around or not.

Gracie Law is not afraid to go after illegal sex-traffickers. There is no small amount of situational irony to be had when she nearly becomes a Chinese milky-eyed zombie bride. 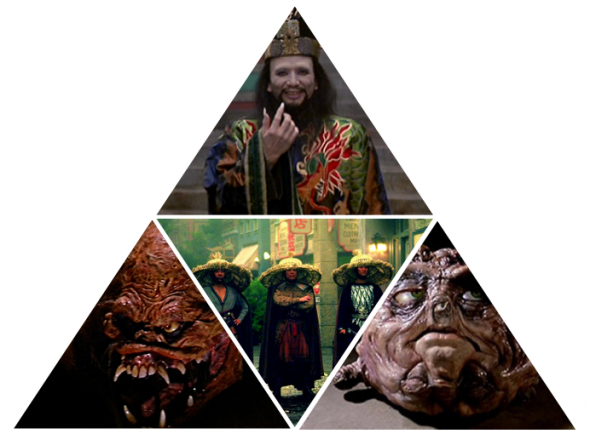 I’m betting for most crime organizations there is a pyramid scheme of evil at work.

Review: When Stefan suggested this as an alternative to Avery’s Demon series, I didn’t really care one way or the other. I’d given myself over to the fact that this particular episode of beer tasting would probably yield both good and bad results. Besides, we’d picked Great Divide’s Yeti as a fail safe of good taste to lift our spirits should the Asian beer portion of this review be really, really awful.

Honestly, I thought I must have been coming down with a mild cold that night (I was), as I’d been disappointed that I couldn’t really smell the Asian beers we’d tried. Even the skunky one was a bit light in odor, not that I wanted a nose full of it. But then we cracked open the Maudite, and low and behold, it was like autumn in a cup. So delicious was its smell. Hints of pears and raisins, a bit of sweetness, it was all I could do to not just still there and breathe deeply for awhile. Eventually came the tasting. This beer pours a nice amber red, retains its head, and is just delicious. Malty sweet notes combine with a hint of spiciness, but all said, the taste isn’t quite as strong as the smell. Even so, I am totally drinking this again. It’s a nice complex beer to sip on while watching movies. 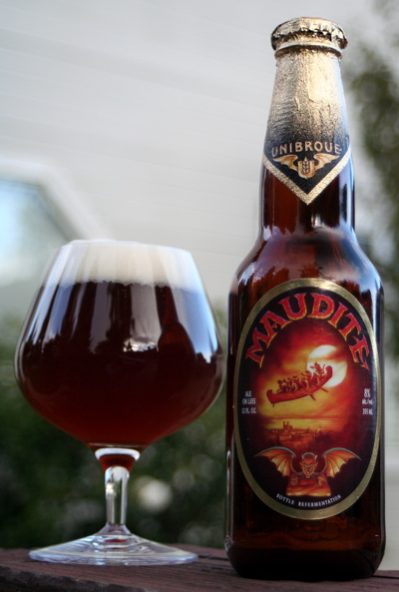 Review: The only Yeti I could ever love comes from the Great Divide Brewing Company. Oh, Yeti, you are so good to curl up with during a movie. Ok, honestly, Great Divide makes magnificent stouts. This pours dark like liquid espresso. I put mine in a Guinness glass and was surprised that it didn’t have much of a head although it did retain a ring of foam. This is just deliciously dark. Roasted malts bring in flavors from dark chocolate to toffee and caramel. And as far as mouthfeel goes, this stout is like velvet glove for your tongue. And at 9.5% ABV it is so strong, you only need one, maybe two if you’re feeling a bit impish. Sadly, this beast is way sexier than the freakish Yeren that carries off Gracie Law in the movie.

Exhibit A: This Yeti is brewed in the style of a Russian Imperial Stout. Also Russia and China are geographical neighbors. Additionally, China is near Nepal and Tibet. And in the movie there is a Yeren, which is the Chinese version of the Tibetan and Nepalese Yeti, so case closed.

Conclusion: If there are better Asian beers out there, it seems like Oklahoma does not carry them. We searched several liquor stores, admittedly we skipped the little Asian District so perhaps we might revisit this query again, but it was slightly disappointing that we could not find at least one exceptional Asian beer at any of the stores we went to. But maybe, like in the final scene of “Big Trouble in Little China,” this isn’t the end.