I can sometimes be oblivious to the world around me when commuting from one place to another. Traffic laws and safety necessitate that whole “eyes on the road” thing. However, since okc.net’s building seems to be in a state of perpetual construction, it only makes sense to get out of the office every so often just to be free of it. It was during one of my photo walks that I caught a glimpse of a familiar sight: porcelain corsets. 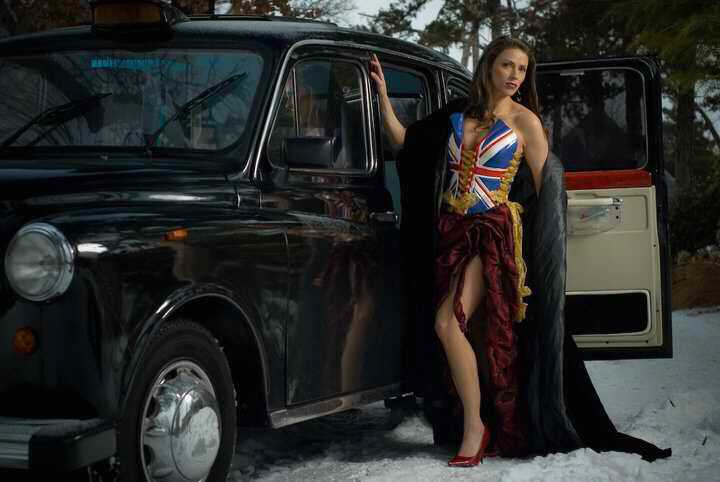 To the best of my knowledge the only woman I know making this style of corset in Oklahoma City is Nicole Moan. Not that I’ve had the occasion to try one out, but I’m going to guess that it might be nippy, but probably in that ever so slightly, naughty-good way. Photo by: Gary Thomas.

Catching sight of Moan’s corsets peaked my curiosity. Had she opened a new gallery and how long had it been open? Naturally this line of inquiry led to an interview with David Ribaudo, owner of Oculus. Nicole Moan, as it turns out, is the gallery director.

When I walked into Oculus for the official “interview,” it was Moan who greeted me at the entrance to the studio portion. You see, Oculus is one part art gallery and one part events space. As you walk-in off the street, it’s all art at first, but beyond the rows of corseted mannequins and mixed-media wall hangings and paintings you’ll find this deceptively small space functions as an antechamber to another much larger room, which while adorn with art, is used primarily for hosting events and classes.

As I met Moan that morning, she struck me as a much more approachable version of Lisbeth Salander. Clad in a black leather jacket that had been both feminine yet striking, she sports a piercing just below her lip. Her hair is longer and braided off to the side. She has a few subtly dyed streaks in shades of purplishy-pink. As we start talking, Ribaudo appears in the doorway between the gallery and the studio. Dressed in a monochromatic black-striped shirt, he has what could be fairly described as boyish good looks with the charm to match. But even as we make our way through formal introductions, I’m curious to know what their relationship at the gallery is like, so I ask.

Ribaudo sends a longing, although impish, gaze to Moan and says, “I love her. I want her to be with me all the time.” At this point he can’t keep a straight face anymore and starts laughing as does Moan. “What are you talking about,” She says, “I’m never here!” They get off topic until I ask them if they’re married. Magically, as if sharing a twin brain, both respond with a long drawn out: “Noooo!”

It turns out the friends met almost two and half years ago. Ribaudo is a photographer, in addition to his other entrepreneurial endeavors, so when he noticed Moan’s Union Jack corset it caught his interest. At the time he’d been importing London taxis for a high end limo service, so when Moan put out the call that she needed a photographer to take photos of her corsets, Ribaudo contacted her to offer the use of his London taxis as props.

Ribaudo at one point had been in the US Army, but after he left he started a series of small businesses and never looked back. The taxi service was one, as were a chain of computer stores, car washes, and he’d had a brokerage firm too. The myriad of these enterprises took place in both North Carolina and Oklahoma, but it was his family ties that settled him in the Oklahoma City area. Even so, when he conceived the idea for Oculus over a year ago, he decided he would ask Moan to oversee the art gallery portion of it as he had never managed an art gallery. It took Ribaudo awhile to find just the right location because all along he’d planned to offer fencing lessons as it was, in his experience, a proven source of income. He needed a space that could both accommodate art and provide uninterrupted room for fencing practice. The Plaza District had been an initial candidate, but it seemed no available store front had the most optimal layout.

23rd Street, where Oculus is located, is currently undergoing its own form of revival. Many of the larger store fronts are being transformed into new businesses. While not easy initially, Ribaudo began a series repairs and preparations to bring the gallery and events space to fruition. Moan brings the art and the know how to pull together a themed show. So far they’ve put on two gallery openings. This Friday, Oct 5th, they present: “Multifarious.” The reception begins at 7 p.m. The featured art work includes: Nicole Moan, Albert Riddle, Chase Vegas, David Ribaudo, Lindsey Webb and Kelly Brinkmeyer. If you’re an artist looking to submit work, Moan says they’re already booked three months in advance, so if you want to apply you need to take this time frame into consideration.

Other events showing up at Oculus? October 20th sees “Dress Me Up in Ceramic.” It’s a party where guests will be able to try on ceramic corsets and be dressed in matching skirts by none other than Nicole Moan herself. They’ll also be treated to getting hair and makeup done by other attendants that evening. Guests will come play dress up, participate in their own lavish photo shoot, and at the end leave with girls’ night photos. And if you’re into it, Oct 31st is a very special evening indeed. Actually, I’m curious to know if there will be a porcelain corseted Dr. Frankenfurter present that night as they’re doing a round of “Rocky Horror Picture Show.” It is another night of dress up, but with more acting involved since audience participation is strongly encouraged as Oculus intends to provide patrons with both toilet paper and water guns. And because they like things a little edgy, on November 2 they’ll be doing a “50 Shades of Grey” show. Guests will be invited to play in the red room. And as another dress up masquerade, naturally, you’ll want to get your photo taken on the big round red bed.

Stop by the gallery to learn more of their class scheduling for fencing, yoga, and Zumba. I hear they’re also in need of a yoga instructor. There’s also some great art on display, one particularly winsome print for sale is a photo of Ribaudo took of a blond model. She stares into the camera with her fencing sword point near eye-level. Beyond the hilt in the area of focus are a pretty set of 60s era doe-eyes. I feel this photo more than others really gets the point across as to the kind of artistic bent that both Moan and Ribaudo seem to share.

2 comments to “Oculus: Tis All In The Eye”