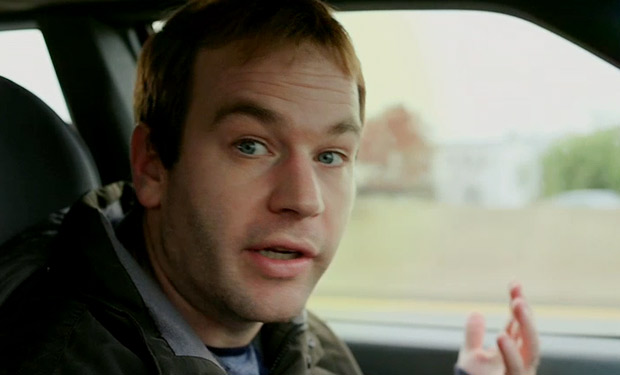 Comedian Mike Birbiglia adapts his one man show Sleepwalk With Me – photo courtesy of IFC Films.

If you are a rabid follower of either public radio or the film festival circuit, you most likely were one of the 500 people who crowded into the OKCMOA Noble theater tonight for Sleepwalk With Me.

Mike Birbiglia’s film version of his comedy set/one man show/book treads familiar thematic ground, but it does so with a doe-eyed charm that makes even well-worn cliches seem cogent and sometimes profound. The story of a thinly disguised Birbiglia (Matt Pandamiglio in the movie) trying to balance a burgeoning comedy career, a stale relationship, and a sleep disorder is the sort of madcap but heartfelt narrative that is the stock in trade of Birbiglia’s stand up comedy and producer Ira Glass’ popular public radio program “This American Life.” Birbiglia proves himself a competent actor and director, balancing an affable innocence with an understated intelligence. His character comes off much like a grown-up Ferris Bueller who has run out of clever schemes and has been reduced to mopping the bathroom of his neighborhood bar.

Birbiglia’s relationship with hapless longtime-girlfriend Abby is so obviously doomed from the first moments of the film that it flirts with Roger Ebert’s famed Idiot Plot – “A plot that requires all the characters to be idiots. If they weren’t, they’d immediately figure out everything and the movie would be over” – but because it’s based on Birbiglia’s actual life, it still manages to ring true. I generally find the stereotypical commitment-phobic male vies with baby and marriage crazy woman trope (which is all to familiar in any number of romantic comedies) tiresome, but the film is salvaged in my cynical eyes by the fact that there is clearly no happy ending in sight. It’s rare that the most depressing moment of a film is the marriage proposal, but anything else would have been dishonest.Â  Birbiglia is brave enough to not paint himself in overly positive light, reminding the audience directly at one point to “remember that you’re on my side.”

It’s easier said than done at times; it’s an open question whether Birbiglia refuses to face reality either in his relationship or in his potentially very dangerous medical condition out of obliviousness or fear, but either way it’s often cringe worthy watching him struggle to come to terms with reality. The end of the film is satisfying if abrupt, and points to the possibility of growth and hope even in the midst of our myriad of flaws.

One of the treats for comedy buffs in this film are the many cameos by comedian friends of Birbiglia (David Wain, Marc Maron, Kristen Schaal, Wyatt Cenac, and probably more that I didn’t catch) but this is not, as they say, a laugh riot. It’s clever and funny, but with a chewy core of sadness and sincerity.