The Dark Knight Rises takes place 8 years after the events of The Dark Knight. Bruce Wayne must decide whether he returns to the vigilante mantle thatâ€™s left him physically disabled and worn to shambles. Despite hanging up the cape and cowl, itâ€™s apparent to the majority of Bruceâ€™s close friends, Alfred Pennyworth and Luscious Fox, that Bruce hasnâ€™t resolved his scars that the Joker (and Harvey Dent/Two-Face subsequently) carved into his psyche. But Bruce must make his choice to ascend again to confront with a warlord mercenary named Bane: he is both the classic movie monster and criminal mastermind. His intellectual bent is unquestionable, bringing all of Gotham into peril by using its people as his instrument. And his body is one that does not bend, nor break, like the crumbling Mr. Wayne. Bruce must resolve this outer conflict to complete himself internally. He must once again put his faith fully in the Gotham citizens, who are now his aid and the enemyâ€˜s weapon.

Letâ€™s define a few complaints that I think most people would agree with. Firstly, some of the actor’s dialogue is muddled and incomprehensible. And Iâ€™m not specifically talking about Bane. Just in general, I feel that Mr. Nolan shouldâ€™ve sacked the sound guy. The sound situation left me in the dark about some of the conversations. Secondly, there are several leaps in logic. And thirdly *Warning: spoilers!* itâ€™s just not good film ethics to kill a villain that youâ€™ve just recently made relatable in such a loose manner.

The bottom-line value of the movie was clearly placed on the shoulders of the actors in great faith by the director. Letâ€™s begin with Anne Hathawayâ€™s Catwoman: sheâ€™s an apparently torn character who’s one desire for a â€œclean slateâ€ is over-shadowed by her necessities in everyday life that keep that slate dirty. She is ultimately her own foil and must come to terms with who she is, and if given the clean slate, what her new take on life would be. Her place in the story acts as a mirror for the threatened Gothamites under Baneâ€™s rule: they must choose between questionable schemes or noble actions.

Tom Hardyâ€™s Bane is fierce. Not quite Heathâ€™s Joker, but certainly close to par. As such I could see him garnering a nomination for Best Supporting Actor. Just as Ledgerâ€˜s performance made him totally unrecognizable, no trace of the softly spoken, fun loving Tom Hardy can be found in the heavy-footed, barbarous demeanor of his role. I compare him to the Joker (if only slightly), because he scares you in a way that you havenâ€™t been scared in a long time. If youâ€™ve ever felt like someone made it their personal mission to destroy you, that theyâ€™ve thought it out in advance, even going so far as to give you hope so that you may despair even more, and someone who is ultimately unstoppable, thatâ€™s the feeling Bane creates. Heâ€™s thought out the game. Heâ€™s as smart as Batman, and heâ€™s a superior physical combatant in nearly every way. Hardyâ€™s incredible acting is done all through his bodily motions and the terrifying expressions through his eyes. This translates into the presence of a hulking juggernaut, whose every eye movement or hand gesture indicates the intent of death.

Christian Baleâ€™s Batman, or I should say Bruce Wayne, is now a man. Really a man. We feel Bruceâ€™s true demons and struggles emerge with a clarity that has not been quite seen before. In the Nolan-verse, Bruce Wayne has never feared dying. And now that heâ€™s trying to leave the life of being Batman, his injuries both large and small put him into a melodramatic stupor in which he welcomes death. Alfred points this out by saying â€œIâ€˜m afraid you want to [fail and die as Batman].â€ But Bruce allows his lack of fear to weaken him and his confidence to be taken too far when he considers the new threat of Bane. He thinks he can fight harder and better like he always has done, and heeds little regard or distinction of Bane from the average criminal. This mindset however, turns out to be a deadly misplacement of apathy. His personal conflict is the guideline for the story. It allows Christian Bale to strike dramatic and emotional epiphanies beyond any live-action portrayal of the vigilante Batman and Bruce Wayne. And I expect for Tom Hardy many â€œgoldenâ€ accolades for his portrayal of Bane.

With all of these critical performances and cohesively impactful direction of the film, The Dark Knight Rises sets the platform for an elegant finale. Itâ€™s just as good as The Dark Knight in most every quality, but most so in the immersion into a world of dramatic epic. Not that it doesnâ€™t have its weak points or its unresolved hang ups, but itâ€™s a theatrical force that is everything itâ€™s supposed to be.

Thanks to Brand Rackley for his behind the scenes photos. You can check out more from his blog and vimeo. 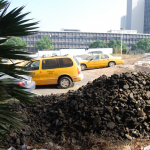 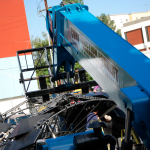 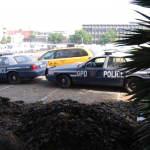 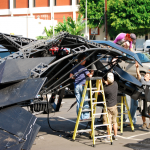