Here was no ‘stern and rockbound coast,’
no ‘forest primeval,’
no ‘rocks and rills’ nor ‘woods and templed hills’
to love;
but an ocean of grass to the stirrups;
rivers ‘half a mile wide and half an inch deep’â€”
or five miles by twenty feet
at the time of spring rains in the mountains;
hills were outcroppings of rockâ€”
knobs on the backs of great saurians.
Here no romantic tradition-hallowed forest-dangersâ€”
the tall dark brooding trees
leaning soul-crushingly inward;
the panther on the bough;
snuffle of wolves at the door-cranny:
instead
the horizon dragging outward at the heart-walls;
the land drought-crucified;
the hosts of tiny vicious flying dragons;
the screaming down-rush of the white-hooded three-day blizzard;
the ocean of grass a stormy sea of flame.
Many came to this land
and some stayed.
As for those who did not,
God grant that they found greener pastures.
As for those who dug in and survived,
their names are familiar to you,
are your own, in whole or in part,
the names of your children. 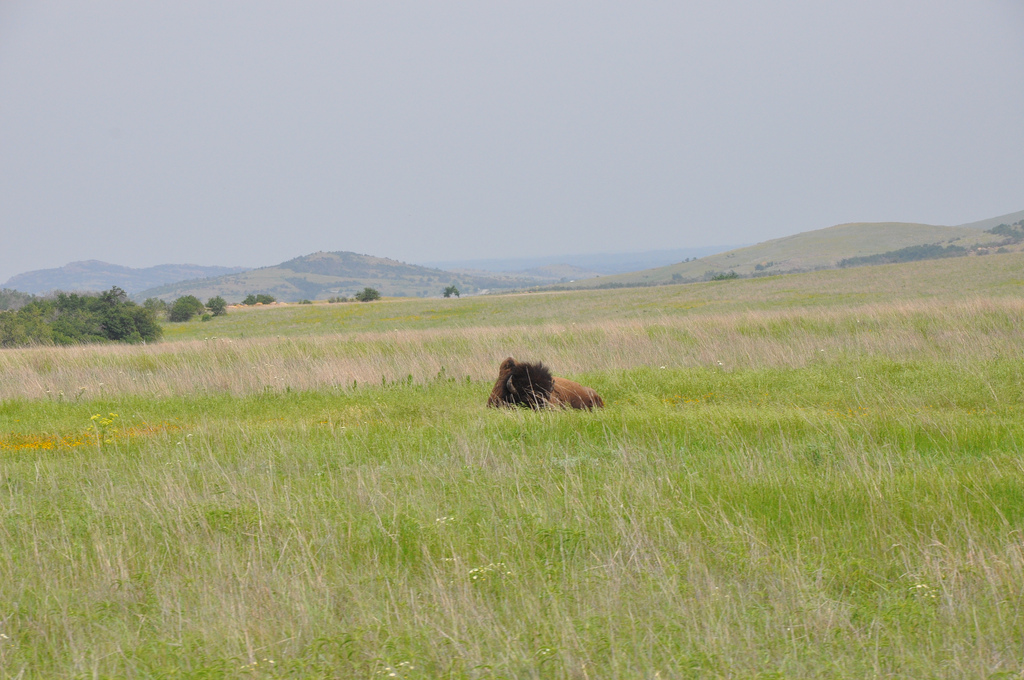 That’s the adjective that news-writers typically use for the “great plains”, the vast region between the Mississippi Valley and the Rocky Mountains.

I have livedÂ  my entire life, except for a few months on the east coast for art school, between the Mississippi Valley and the Rocky Mountains. I have never once seen a dust storm or a tumbleweed. Not once.

The Dust Bowl, the colloquial name for the massive ecological disaster that afflicted the middle of the country in the middle of the last century is partly to blame for this common misconception. Hundreds of thousands of refugees poured out of the plains and mid south to the “promised land” of Southern California, Oregon, Washington, and elsewhere, and were met with hostility and prejudice.

When I first met my Californian wife’s grandfather, a native of Hannibal, Missouri, he shook my hand and slapped me on the back. “Don’t let them ever call you Okie, Okie.” he said.

These forsaken plains, the “flyover country”, this is where I’m from.

It’s where you are from also, even if you aren’t from here.

The Great Plains are a distinct entity, different entirely from the wet woodlands of the east. The 98th Meridian is as imposing a natural boundary as exists anywhere in the world. East of the 98th meridian, there is usually enough rain for a yearly crop. West of it, there is usually not.

Walter Prescott Webb’s history “The Great Plains” argues that Anglo-American civilization formed in the wet timbered areas of Europe and North America and was well adapted to these environments. When European settlers came to this radically different land, their lifestyles and institutions failed and had to adapt to survive. Webb’s history, written in the 1930s by a rather conservative historian, is preoccupied with explaining why the plains states were so uniquely progressive, as they had been since the 1840s and would stay until the 1980s. Webb’s thesis is that the people of the plains had to be progressive, because they depended so entirely on technological innovation (the windmill, barbed wire, sod housing) and on help from the community for survival, and their adversaries were mostly conservative institutions like banks and the federal government.

I would argue that not much has changed.

Our best hope as a region is innovation and technology. We desperately need to develop our high-tech sector, and our fine public universities have led the charge in this area. The vibrant bio-tech sector in OKC is clearly a beacon of future innovation, and has helped insulate us from low natural gas prices and other cyclical economic changes.

We need each other to survive as a region, as a state, and as a people. The federal government could give a shit about us. That is a fact that transcends partisan political considerations. In a democracy, numbers rule all, and we don’t have numbers. Even as migrants pour in from the coasts because of our low unemployment, we still don’t have much to offer in terms of density. The burgeoning Fargo art scene and the Omaha music scene will appeal to some people, but a lot of people prefer the anonymity and bustle of a truly large city, and Chicago is the only one of those we have.

It is better, it is more honest, for us to embrace what we are and where we are. We are flatlanders, prairie people, descendents of farmers and hunter/gatherers. There is no reason to be ashamed of this. We have a proud history of egalitarianism and left populism. Lets embrace it. We aren’t the south, and if I see another confederate flag, I will lose my shit. We are not the north either; we are what we are, the unbroken and unbowed children of Woody Guthrie and Fred Harris. Reclaim your legacy; don’t vote party line democrat or republican; vote for the most progressive, forward thinking candidate.

We have our foibles, but they are explainable.

Think for a moment; how might mores surrounding abortion differ in a region where population loss is a real problem, as opposed to an overcrowded urban context?

What impact does a culture of utopian socialist Christianity have on people after 100 years or so?

How likely are people to embrace mainstream ecological science when not so long ago a pair of New Jersey based “deep ecology” academics proposed the forceable depopulation of our entire region* to make way for a “buffalo commons”?

We aren’t bad people, we aren’t stupid or unenlightened; we’re just different, and you need to tailorÂ  your appeals to our distinct culture.

No one outside of Oklahoma thinks about Oklahoma ever. We are self obsessed and think that everyone hates us. This isn’t irrational; those who have opinions of our state usually have negative opinions. Still, most people just don’t care enough about us to have misconceptions. That is what we in the PR business call an opportunity.