Editor’s Note: Natalee Dobbs sends us her second installment about infertility and adoption: a DOs and DONT’S list follows. Think you know how much it costs to adopt? Check the chart below.

“Why don’t you just adopt?”Â  This is a question uttered by many a well-meaning friend or family member to couples who are struggling with infertility. Â These words bring forth a mix of frustration, anger and sadness on the part of the infertile person because there is no such thing “just adopting.”

The decision to pursue adoption as a means to complete your family is not an easy one, and for most infertile couples, it is not the first. Â Usually this decision is only reached after a long struggle with trying to conceive a child via Assisted Reproductive Technology (ART). Â When for whatever reason the chosen treatment is not successful, and the couple still wishes to parent a child, it is then that the subject of adoption is seriously discussed. Â Of course, this is not always the case. Â There are those couples, who upon finding that they cannot conceive, immediately decide that adoption is the right choice for them. Additionally, there are couples for whom adoption is the only choice for creating their family; this is either because of personal convictions or a desire to not add to an already overpopulated world. Â However, since the purpose of this series is to share my story, I’ll tell you how and why my husband and I are now on the way to becoming parents via adoption.

If you’ve read my previous column, you’ll know that my husband and I are unable to conceive a child. Â In fact, once we discovered my husband’s fertility issues, it becameÂ abundantlyÂ clear that even going the IVF route had become that much more difficult. Â Because my husband’s sperm (in addition to being low in number) have both motility (speed) and morphology (shape) issues, any attempts to reproduce via In-Vitro Fertilization would require the additional step of Intracytoplasmic Sperm Injection (ICSI)Â – where my husband’s “sample” would be analyzed in a lab to find a normal spermatatozoaÂ cell and then have said sperm cell injected directly into one of my harvested eggs via a very tiny and fine needle in order to start the conception process. Â This additional step can tack on a few thousand extra dollars to an already expensive process.

Like many women, in the beginning days of trying to conceive the “old fashioned way”, I daydreamed about how I would reveal the news of my pregnancy to my spouse. Â I had scenarios ranging from having him wait in the other room while I peed on a stick then joyfully revealing that all important second pink line, to wrapping said pregnancy test in a beautiful box for him to open with a note inside that said “Congratulations, Daddy!” Â Those daydreams quickly became nightmares the longer we tried to have a baby. Â Once we knew that we would have to turn to science for a chance at a biological child, the daydreams shifted to having our Reproductive EndocrinologistÂ calling us with the happy news upon a successful completion of an IVF cycle.

Excuse me a moment while I laugh at my formally naive self……ha ha ha ha ha……sorry about that, but it had to be done.

Because this process is very expensive, my daydreams would remain just that for many years to come. Â During that time, I researched to learn all I could about infertility, the treatments available, and the alternative options for building a family. Â My husband and I also talked (and occasionally argued) over which path to take. Â At the time, my husband (like most men) was quite adamant that he have a biological connection to any future children we may have. Â He expressed the common fear that he would not be able to bond with or love a child that he did not share DNA with. Â This would rule out the option of utilizing a sperm donor, and at the time – adoption. Â His stance on the issue would be a source of contention between us for many years. Â This is one of the many reasons why infertility can break up a relationship and even lead to divorce. Â The couple loses sight of the reasons why they wanted to create a family in the first place. Â One of our primary arguments was that after careful consideration, I had come to the conclusion that I did not wish to pursue IVF treatment for several reasons, but the two most important ones were that: 1. Â How invasive the procedures and drugs would be for my body while all he had to do was provide a “sample” in a cup, and 2. I feared that after all of the time, tears, and money spent, we would come away with no child at all due to a failure of the embryo to implant, or a miscarriage caused by my specific fertility issues. Â For myself, the primary goal was not a successful, healthy pregnancy, but to just be a mother to a child, any child at all.

It was not until the births of my brother’s children and the foster-adoptions of my three sisters over the past ten years that my husband has come to reconsider his position on the biological connection. Â Once he was around our nephews, niece and my sisters, he grew to love them immensely and came to the realization that he is more than capable of loving a child not directly related to himself. Â He still had many fears and questions due to the myths perpetuated about domestic, international and foster adoptionÂ such as the birth mother changing her mind, the costs involved, and a fear of rejection by the adopted child. Â We also had the unfortunate experience of having two potential adoption situations (presented to us by well meaning family members) over the past few years end up falling through before any serious steps could be taken; but not before our hearts were broken in the process. Â Eventually, mostly owing to positive experiences my family had with the adoption of my sisters, we decided to pursue foster adoption through a private agency that works with the Oklahoma Department of Human Services (OK DHS).

While undergoing the process to become foster parents (finger printing, background checks, referrals sent, etc.) over the past few months, it has brought me endless joy to know that path to parenthood would soon be complete, even if it took several foster placements before we were presented with the option to adopt. Â In a very happy twist of events, we have been recently approached by someone very close to us with the opportunity to privately adopt their as-yet-unborn child. Â This person cannot provide the kind of life for their child that they feel he or she deserves and can think of no better parents for their child than myself and my husband. Â This is a situation that we never dreamed we would be offered and have more than joyfully accepted their offer. Â Unlike our other potential private adoption situations, where the birth parents were strangers, this person is not only known and loved deeply by us already, but is one hundred per-cent committed to placing their child with us. Â I am overwhelmed with emotion at the knowledge that by Christmas Day (the expected due date), after thirteen years of heartache and struggle, I will finally be able to claim the title of “Mommy.”Â  This is a gift that we can never begin repay to this person and the only way we can try is to raise this child with all of the love in my heart in the most open adoption situation we can provide.

In closing, I would like to provide you with a handy list of “Dos and Don’ts” when it comes to speaking to an infertile person about adoption: 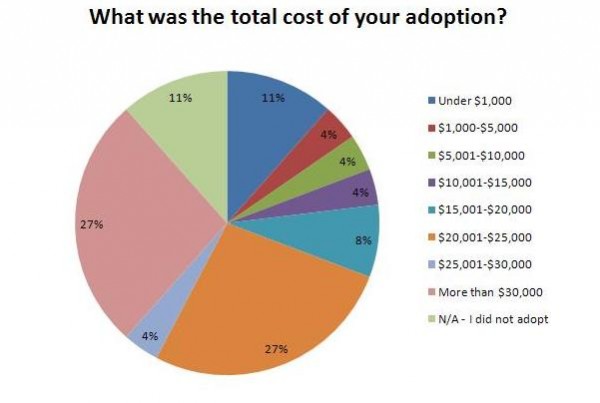